Long before America knew that a man name Barack Obama would become president and shock the political system, it was Detroit’s own Congressman John Conyers Jr., who traveled to Chicago to give his blessings to the little-known U.S. Senator with a difficult name to run for the presidency.

I was sitting in the back of the room at the Detroit Marriott Hotel - Renaissance Center in 2008, when then-candidate Obama was talking to a small group of religious and civic leaders about the historic nature of the campaign and what was at stake. As he explained to them about the need to get out the vote, Obama — who was on the threshold of becoming the Democratic nominee — paid homage to Conyers, who was in attendance. He told the group that Conyers was the first major lawmaker in the nation to support his candidacy when it wasn’t a conventional move.

The story of Conyers taking a risk on Obama largely defined the sweep of his life, which came to an end Sunday. He was a man who took great risk on the issues and on the people he fought for, to upend the status quo for what he believed.

He doggedly championed civil and human rights from 1965, when he was first elected to Congress, up to the final moments of a congressional career that abruptly ended in 2017 after he faced mounting allegations of sexual harassment. His contributions to American history are more than the allegations that forced him to resign, and it would be unfair for us to look at the life of this great American hero and veteran through the lens of his accusers.

Conyers’ body of work is a testament to his unrelenting commitment to fight for those who are disenfranchised in American society. Over the decades, he authored key legislation that had an indelible impact on our national life.

He also introduced H.R. 40, the bill to establish a commission to study the impact of the cruel institution of slavery. Known as the reparations bill, H.R. 40 , first introduced in 1989, continues to linger in the House Judiciary Committee, which Conyers himself once led as its first African American chairman.

“John Conyers was a lover of Detroit. Detroit and the nation has no idea how much they owe this man who gave his life to public service and always fighting for the underdog,” JoAnn Watson, former Detroit city council member, said. "He was a great friend and a mentor to me. I don’t think I would have been elected to public office without him.”

Watson said few know that it was Conyers who first introduced Rev Jesse Jackson to Rev Martin Luther King Jr., which underscores his commitment in supporting those willing to fight for civil rights.

U.S. Rep. John Conyers tries to calm the crowd that had gathered at 12th and Clairmount streets in Detroit as the1967 unrest broke out. (Photo: Detroit News archives)

“John Conyers was a long distance runner,” Jackson told me hours after learning of Conyers’ death. “He was the only one Dr. King campaigned for when he ran for Congress. He organized the Congressional Black Caucus, he helped start the free Nelson Mandela campaign and also the black political convention in Gary, Indiana.”

Jackson said one of Conyers’ most important acts was sponsoring the bill to create the MLK holiday in Congress.

“Some people thought it was absurd. At one point along the way Stevie Wonder turned it into music, but there would have been no King holiday to sing about without Conyers,” Jackson said. “Life is like a baseball and Conyers has had more home runs than ever.”

Sam Riddle, a Detroit political veteran who has known Conyers for years and stood by him during calls for his resignation, said his death is loss for black America.

“For decades, John Conyers was black America’s Congressman even as he remained steeped in the protocol of American cloakroom power politics so necessary to get things done in Washington,” Riddle said. “The streets of impoverished Detroit mourn John Conyers.”

Robert Weiner, who worked for Conyers’ before serving as a spokesman in the Bill Clinton White House, praised his former boss as a man with a conscience.

“There is no one who had a more better and more consistent and rational voice for American progressiveness than John Conyers,” Weiner said. “He fought for full employment, health care, criminal justice reform and other important issues.”

But Weiner said, as we remember Conyers, we shouldn’t forget that he was a big supporter of the arts as well, particularly jazz music. He even introduced a bill to promote jazz education. 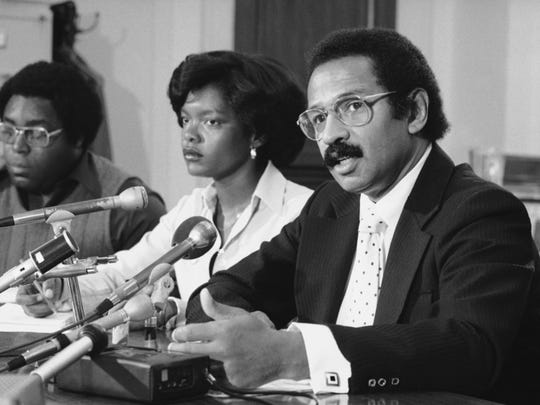 Rep. John Conyers, M-Mich. talks to reporters during a press conference in Washington on Thursday, Oct. 6, 1977. Conyers called the briefing to announce a national day of protest on the Alan Bakke case. The case, formally Regents of the University of California v. Bakke, ruling in which, on June 28, 1978, the U.S. Supreme Court declared affirmative action constitutional but invalidated the use of racial quotas. (Photo: Barry Thumma, AP)

In fact, in Congress, they called him “Mr. Jazz.”

Conyers’ legendary work helped shaped America in the last half century, and he took his rightful place in the equal rights battles that have brought us this far. He was always ready to make the case about helping poor people to anyone who would listen.

I remember on numerous occasions when Conyers would reach out to me personally asking to meet to discuss some important issues that were coming before Congress or other troubling matters affecting Detroit. We would meet at Fishbones restaurant in downtown Detroit or at Noni’s Sherwood Grille on the city’s west side, where like a defense lawyer, he would make a compelling case regarding a particular issue and why he thought the media should be interested. He would insist on getting a commitment from me to cover the issue before the end of the meeting, because he felt issues regarding the poor hardly drew mainstream media coverage.

That’s why his death is a blow to all those who feel voiceless in our democracy; because Conyers powerfully represented their aspirations and visions for a more perfect union.