Bankole: Council should stand up to mayor, reject bond

Bankole: Council should stand up to mayor, reject bond 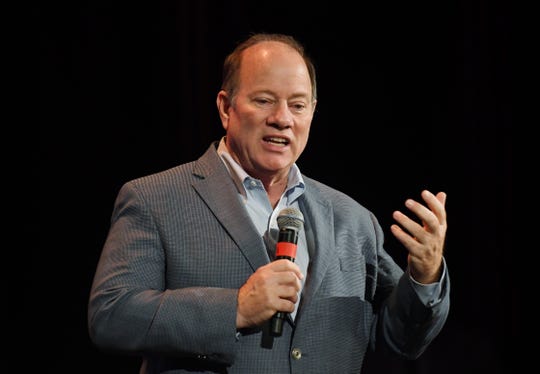 An administration absorbed in scandal that has demonstrated a lack of transparency and accountability cannot be trusted to steward the public good, let alone affect the full and inclusive recovery for which Detroiters have long been waiting.

Amid growing public distrust of Detroit Mayor Mike Duggan and his administration, the City Council should reject his $250 million bond proposal to remove blight by 2025. The council is expected to take up the issue this week, but the city’s legislative body owes no allegiance to the mayor.

The council’s primary role is to check on the excesses of the administration to prevent abuse of public assets. Moreover, the council should ensure that there are many economic entry lanes for the Detroiters left behind in the recovery, and not just the well-connected in downtown.

No matter how sophisticated the mayor’s explanation for a new demolition bond (which would put Detroit taxpayers on the hook), the council should not fall for his latest political device. The council has a history of serving as a rubber stamp for whatever the mayor wants. Sometimes there is little room for exhaustive public debate because the administration has already garnered enough votes on council to pass whatever proposal the mayor wants.

But given that the administration has just emerged from a federal criminal demolition probe, which the mayor has tried to downplay, the council should stand up to Duggan. The council should be a band of dissenters willing to instill transparency and trust in government.

Contrary to how it has acted, the Duggan regime is not above reproach. The mayor continues to brush off every scandal revealed, no matter how damaging, because he expects no tough questions from the council. Even as his reputation diminishes in light of the latest scandals, the mayor still expects the council to dismiss the pitfalls of some of his programs.

The council bears the burden of responsibility of ensuring Detroit's comeback mirrors the aspirations of the larger impoverished community. Council members should assert themselves and question the mayor's programs, instead of jumping to co-sign his proposals before debate even begins.

No one is opposed to blight removal, but the mayor has not demonstrated that his administration can be trusted with another demolition deal in light of what occurred with the first one.

Duggan doesn’t seem to be the kind of political leader who would go and ask for forgiveness for a series of missteps before his constituents. A political survivor, who cut his teeth during the administration of former Wayne County Executive Edward McNamara, Duggan seems to think he can wriggle through every scandal that undermines public faith in him and his administration. As a result, he can marshal a community public relations machine behind the latest bond proposal and pressure the City Council for support.

Council members were not elected by Duggan. They can, and should, say no to the mayor, who has yet to grasp the implications of a co-equal branch of government.