A black candidate with deep roots in the white liberal establishment would only compromise the demands for true economic reform, writes Bankole.

The economic plight of America’s forgotten communities should be the top priority of the 2020 Democratic presidential campaign. Either the Democratic Party understands this growing need for serious and profound structural changes that will guarantee equality, or it risks losing next year’s election to Donald Trump.

For serious Democrats who want to see real social reform, the latest entry of former Massachusetts governor Deval Patrick into the Democratic presidential race last week is nothing to rejoice about. Patrick, who served under former President Bill Clinton and has significant ties to Wall Street, is not going to be the purveyor of the change that grassroots Democrats have been seeking. 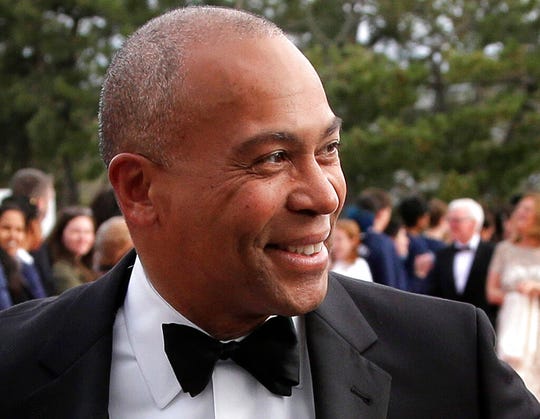 In this May 7, 2017 file photo, former Massachusetts Gov. Deval Patrick arrives at the John F. Kennedy Presidential Library and Museum in Boston. Patrick is telling allies he plans to seek the Democratic presidential nomination. That's according to a person with knowledge of his plans who spoke to The Associated Press on condition of anonymity to discuss private conversations. (Photo: Steven Senne, AP, File)

A key question some Democrats will have to answer is how they justify supporting a man who worked for Bain Capital, the same private equity company that became a political liability for Mitt Romney, the 2012 Republican nominee, because of his affiliation with the company? No matter how sophisticated Patrick’s explanation of his work at Bain Capital, the bottom line is he will have a very difficult time convincing people that he isn’t a Wall Street juggernaut.

Another issue Patrick will have to confront is the 1994 omnibus crime bill, which led to increased mass incarceration in the black community, because he was the head of the U.S. Department of Justice Civil Rights Division from 1994-97 under Clinton. Given how that disastrous crime bill Clinton himself apologized for has taken center stage in the current push for criminal justice reform, Patrick is going to have some explaining to do.

Patrick’s sudden entry into the race also revealed something more sinister, in my view: that the centrists in the party and their Wall Street backers who would welcome his campaign have refused to concede to the fact that the party is changing. The future of the Democratic Party no longer belongs to powerbrokers like Patrick. The party’s future belongs to a new band of courageous voices on the national stage like former Georgia gubernatorial candidate Stacey Abrams, Boston Congresswoman Ayanna Pressley, Detroit Congresswoman Rashida Tlaib and others of their ilk. They are speaking to the needs of the party and ensuring that there is a realistic agenda to tackle the kind of heinous poverty that has crippled many of our urban and rural communities.

Patrick, who has enjoyed a remarkable and successful career, is a darling of the white liberal establishment. That establishment is conflicted by the fact that presidential candidates like Elizabeth Warren, Bernie Sanders, Julian Castro and others are channeling economic inequality messages that resonate with where the party is headed. Their campaigns have ushered in somewhat of a liberation movement by speaking directly and forcefully to the ills of the nation, and how Democrats have time and time again played black and brown voters cheap.

The white liberal establishment would love to keep things the way they are. And with a Patrick candidacy, they can keep touting his highest political accomplishment as the first black governor of Massachusetts and nothing else. For too long, the alliance between blacks and the white liberal establishment has produced nothing significant for the advancement of the black community. Frankly, that alliance which should be mutually beneficial between both groups has only produced limited loyalty and respect.

A prominent black candidate in the 2020 race with deep roots in the white liberal establishment would only compromise the demands for true economic reform that will help poor people, including the 3.9 million veterans across the nation who are struggling daily to survive.

More importantly, a Patrick campaign would inadvertently provide cover to the DNC donors that Congresswoman Pressley gave a tongue-lashing to last year when she asked: “Do black lives only matter in election years?”