Partying at ‘Fifty Years of Parties’

“Fifty Years of Parties” was an amazing event presented by Detroit’s iconic premier party hosts Tom and Diane Schoenith on Tuesday evening, celebrating decades of memorable occasions. To say this spectacular soiree, held at the Renaissance Marriott, was completely over the top would be an understatement. More than 600 invited guests came out to enjoy the memories of the grandest parties of the Schoenith’s career. There was so much happening at the gathering that we don’t even know how to begin to describe it. So we’ll just sprinkle you with some highlights:

A number of large kiosks arranged by decades were positioned throughout the room, featuring mementos from the actual events — invitations, photos, thank-you notes, movies, telegrams and thousands of newspaper and magazine clippings. Professional models showcased onstage 25 elegant designer dresses that were actually worn by Diane at certain occasions (They even duplicated the hairstyles and makeup she wore with the corresponding outfits). Guests were treated to food and cocktails across the decades as a nod to the party theme — mountains of delectable lamb chops, ambrosia salad, shrimp cocktails, sangria, margaritas and bison sliders excellently prepared in the Marriott kitchen.

There was a shiny new Lincoln Continental in the room (yes, in the home of GM), that was a surprise gift to Diane from Tom. There was not one, but two after parties — one at the London Chop House (actress Ali McGraw showed up for that one) and the other at Townhouse Detroit, where several of the younger guests popped bottles into the wee hours the next day.

“We’ve been delighted and honored to host so many wonderful events for leaders of industry and global celebrities to everyday people, to launching new products to the world and especially raising money for charity,” said Tom. “So now we prepare for the next 50. Joking, of course.” 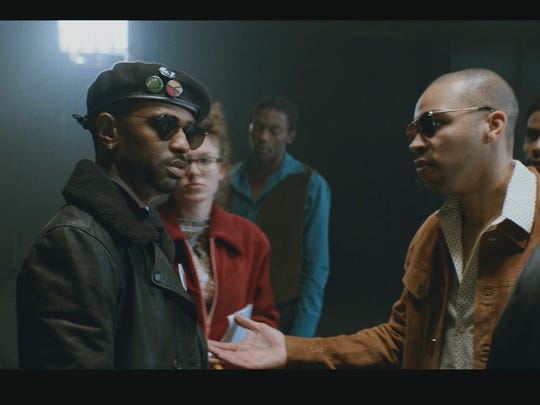 The provocative piece, which mixes retro 1970s with futuristic visions, is in support of Sean and Jhene’s new album, “TWENTY88.” It was fun to see director Lamont, a former actor, appear in the film as a film director. “That was not initially in the plan,” he laughs. “But when we got to that part, everyone was like, ‘that’s your role, right?’ So I decided why not, and dusted off the old acting chops.” Most recently, Lamont has directed music videos and visuals for several well-known rappers and hip-hop artists, most notably, Big Sean’s “IDFWU,” which was nominated for numerous awards. You can check out “Out of Love” on YouTube and Vevo.

The 910AM Superstation continues to add local on air hosts that make you go, “Wow.” In addition to veteran media personalities like Karen Dumas, Bankole Thompson, Cliff Russell and Steve Hood, they’ve also brought on board a number of high profile — and let’s face it — controversial, nonmedia folks like Judge Vonda Evans, Christine Beatty, Ralph Godbee, Wade McCree and Robert Ficano. The newest addition to the “wow” roster is Nat Morris. You may remember him from the popular back-in-the-day (circa 1970s) WGPR dance show, “The Scene.” Morris will make his debut on May 2 with a show called “History of Recorded Black Music In America.”

Chuck Bennett is the creator of the Social Metro. Visit thesocialmetro.com.