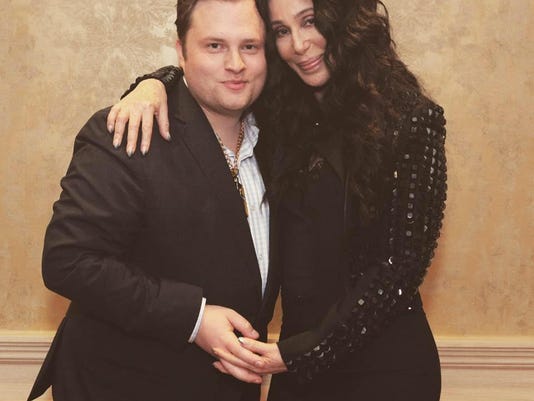 Metro Detroit attorney Joumana Kayrouz hosted a spectacular bash at her lavish Bloomfield Hills home on Monday with a very special guest — none other than Cher. A political fundraiser for Hillary Clinton for president, more than 300 people piled into the posh digs, paying anywhere from $125 to $5,000. Skillfully executed by the Roostertail and overseen by local promoter Darius Smith, features included dramatic lighting, an over-the-top champagne bar, and a really good Mediterranean strolling dinner prepared by Joumana’s personal chef, Zetta. The party was from 8 until 11 p.m., and the guest of honor didn’t show up until 10:30, but once she arrived, she did not disappoint. Looking fabulous in a short little black dress under a beaded jacket, she mingled a bit, took tons of photos and addressed the crowd with a delightful, insightful talk for about 15 minutes. “I’m so honored to have Cher in my home,” says Joumana. “She’s an American icon, this is such an important cause, and it has truly been an amazing evening.”

Nearly 100 Metro Detroit movers and shakers gathered at Bella Piatti in Birmingham on Sunday to celebrate the birthday of Nino Cutraro, who co-owns the celebrated restaurant with his wife, Liz. Guests went over the top with costumes including everything from WDIV news anchor Devin Scilian transitioning from Clark Kent to Superman (he actually looks the part in real life) to philanthropist Eleanor Aronovitz as an X-rated, wet T-shirt contest winner. And we can’t forget about Baaco Ristorante’s Monica DelSignore, who freaked everybody out by cuddling in her arms the eeriest Chucky doll ever.

Most of the tables were removed to create a large dance floor as the cleverly costumed waitstaff passed a seemingly endless parade of munchies such as lamb chops, smoked salmon, shrimp cocktails, meatballs, caprese and beef tenderloin. Gifts were given for the best costume, but everyone agreed that Liz was the biggest surprise of the evening. While Nino made a perfect Don Corleone from “The Godfather,” Liz was totally unrecognizable as his sidekick male counsel. With a moustache, glasses, a man’s hat and suit, she spent most of the evening telling guests, “It’s me, Liz.” This is the fourth year for Nino’s birthday-Halloween party, and as always, in lieu of gifts, guests brought tons of unwrapped toys for Variety Children’s Charity.

If you watched Fox 2 News last night, surely you noticed that Detroit’s most popular news station has a dazzling new set. “The set prior to this one was 10 years old,” explains the station’s head of creative services, Keith Stironek. “Now we not only have a new look, but we are able to take advantage of new technology.” The fresh set was revealed last night (Thursday) for the first time during the 5 o’clock news hour. It includes slick new furnishings, multiple presentation areas, and four 98-inch flat panels structured in an arc formation. “This new set allows us to tell the story in a bigger, better, more appealing way,” adds Fox 2 News Director Kevin Roseborough. The aesthetics are pleasing and functional, and specifically designed to include extensive social media interaction. And, of course, we had to ask what was the cost of this splashy new facelift? Keith would only say, “We made a substantial commitment.” Congrats, Fox 2. You look marvelous!