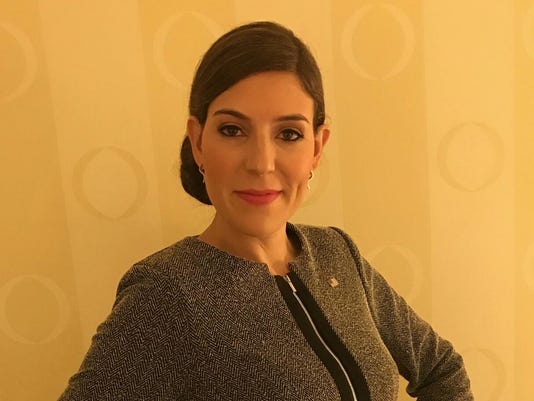 Bloomfield Hills native Lena Epstein is floating on cloud nine as she navigates her way through a jammed-packed itinerary in Washington this week, celebrating the inauguration of President-elect Donald Trump. Lena was co-chair for the Trump Michigan Campaign and is enjoying a bit of global celebrity with news outlets around the world that are intrigued by Trump’s successful Michigan campaign. “This is so exciting,” she exclaims. “I’ve got an interview with Channel 4 in the UK and then an interview for a podcast with the Washington Post. And that’s just the beginning.” That’s all fine and good, but what are you wearing to the ball? Well, Lena is a co-owner of Southfield-based Vesco Oil, but she’s also from the well-known Michigan fashion family, the Winkelmans. “So you know what I’m wearing is a big deal, right,” she asked? “I brought three dresses to choose from.” She’s leaning toward a black, two-piece Dolce & Gabbana that. she says, makes her feel like a princess. “It’s classic and it’s beautiful and symbolic of this occasion,” she adds. So, will we be hearing about a new presidential appointment for Lena soon? “I’m not ready to address that just yet, but I must say that I’m thrilled to continue to support the Trump administration, demonstrating that our futures and economic prosperity lie with Trump and the GOP.”

For many years, for former General Motors VP of Design Ed Welburn, auto shows have meant revealing fancy new cars to the public. This year, however, the first North American International Auto Show since he retired, Welburn revealed something a little more private. He and his lady friend, Jessie Beld-Elliott, have acquired an old fire station in downtown Detroit. Known as Ladder 12, it will be his studio and office, and their downtown getaway. It’s sleekly designed with two corvettes strategically placed under a massive crystal chandelier. They opened it for its first major reveal last week on Charity Preview night. Along with PR guru Justin Near of Near Perfect Media, they hosted a perfect dinner party and after-the-auto-show party for about 100 guests. On Monday, they followed it up by welcoming the Rev. Jesse Jackson for a private soul food dinner catered by Beans & Cornbread. “He requested catfish for dinner,” says Beld-Elliot. “It was such an honor to have him here for dinner with us on MLK Day. We laughed and talked and took pictures. It was really momentous.”

The Parade Company Studio is offering a special day for lovers again this year with private Valentine’s Day tours. On Feb. 10 and Feb. 11, participating couples will be offered a behind-the-scenes look at Detroit’s most beloved holiday tradition with a guided tour including an up-close view of the larger-than-life characters and floats. Each tour includes a commemorative photo and gift bag that includes a bottle of champagne, flowers, chocolates, beads and the signature Parade Company clown noses. Proceeds raised will benefit the Parade Company, creator of America’s Thanksgiving Parade presented by Art Van and the Ford Fireworks. Cost is $100 per couple. Visit theparade.org.