Society: Schoeniths whisk guests away to 1920s at one-night speakeasy

A mock newspaper went out as the invitation, beckoning guests to join Detroit’s premier party hosts for a one-night speakeasy

Society: Schoeniths whisk guests away to 1920s at one-night speakeasy

For Roostertail owners Tom and Diane Schoenith, it was an exercise in creativity. For the more than 200 guests who attended the Valentine’s Night Speakeasy that the Schoeniths hosted on Feb. 14, it was one of the most exciting, glamorous parties of the season. A mock newspaper went out as the invitation, beckoning guests to join Detroit’s premier party hosts for a one-night speakeasy to be held, not at the Roostertail, but in the Ambassador Ballroom at the Detroit Marriott inside the Renaissance Center.

“The fuzz caught Diane sipping hootch at the Roostertail and boarded up the joint. We’ve relocated the party to keep the champagne flowing,” read the invitation. 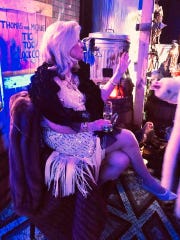 The Schoeniths and their Roostertail crew -- led by son Michael Schoenith and event director Shawna Peplinski -- magically transformed the Marriott ballroom into two distinctive spaces that perfectly conveyed the unique back alley/speakeasy concept. Guests were led into a dark room decorated like an alley, complete with brick walls and gangsters, whiskey barrels, boxes filled with artifacts from the 1920s, and dingy clothes hanging on a clothesline. During the cocktail hour, from behind a black drape, gloved hands would appear, offering glasses of champagne or craft cocktails served in Mason jars. 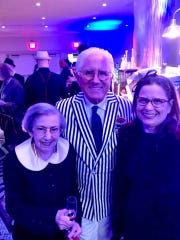 At the back of the alley, there was a red door. Knock twice on the door, and it opens to a beautifully decorated ballroom with long tables covered in miles of sequined linen. The tables were framed with gold chiavari chairs and topped with crystal candelabras. There were confetti cannons, toilet paper launchers, a balloon drop, tap dancers, and world champion tango dancers. There were screens showing silent movies and a soundtrack from the 1920s. The Marriott provided an awesome strolling dinner spread that included salmon wellington, beef wellington, grilled cheese sandwiches served with a variety of soups, and a spicy meatball dish. 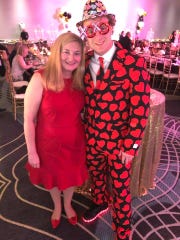 Many of the guests dressed in 1920s attire. There was lots of fringe, flapper dresses and cigarette holders. The crowd was diverse including, past brides and grooms from the Roostertail as well as social media influencers and local socialites, including Rosemary and Contessa Bannon, Carol Minowitz, Bob and Mary Ann Bury, Barb Monaghan and Caleb Zandstra -- who was dazzling in a heart-covered Valentine’s Day suit -- Patti Kukula and Judge James Chylinski, Alan and Susan Lichtenstein, and Barry Solomon and his nationally known celebrity photographer wife, Linda Solomon, who provided photos for this column.

“This party was one of their (Schoeniths) best,” says Linda Solomon. “The Marriott has never been this glamorous.”

Chuck Bennett is the Fox 2 News Style Ambassador and the creator of TheSocialMetro.com.