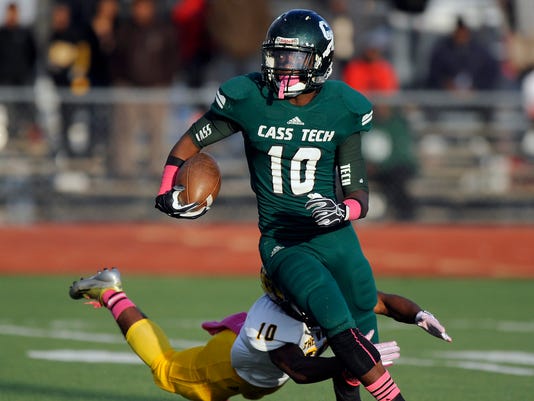 Detroit — It's Championship Week at Ford Field with a pair of games set this weekend with titles on the line between teams in The News Super 20 poll.

King coach Dale Harvel is just happy to be around to enjoy the competitiveness between the state powers. And, for good reason since Harvel suffered a heart attack Sept. 27 when King played Mumford.

Harvel, 55, was back on the sidelines Friday night when King blanked Renaissance, 34-0, in a PSL semifinal, proud of his team's defense, but still saying the Crusaders need a better running game if they are going to have a chance at the title.

"I'm not satisfied with our running game at all," Harvel said after witnessing junior quarterback Mikale Washington throw four touchdown passes, two to junior Donnie Corley. "We got the win, but I'm not pleased with it at all because we didn't do anything in the run game that says that we're a team that can move on in the state playoffs.

"We have to be able to run the football to beat a team like Cass. You can't be one dimensional, throwing the ball up and down the field, playing Arena football, and expect to beat Cass Tech. And, if we can't do a better job of running the football than what we did tonight, we'll be an early knockout in the state playoffs."

King's defense — which has allowed just 48 points this season — will be tested by Michigan-bound running back Mike Weber, who had 216 yards and three TDs to rally Cass Tech from a 12-0 fourth-quarter deficit to a 19-12 semifinal win over East English Village Prep Friday.

Thrilled to be back

Yes, it is amazing Harvel is already back on the sidelines, but he said three weeks was long enough.

"Three weeks ago, I had a heart attack when we played at Mumford," Harvel said. "I wasn't feeling good all day, and when I got off the bus and walked to the other side of the football field, I felt like I ran a marathon. When the game went on, I had problems breathing so I had to sit on the bench the whole second half.

"Then, at the end of the game when I stood up to get to the bus, I had to sit down. There was a point where I couldn't catch my breath. They had to put me in the EMS to take me to Sinai-Grace. They did two stents that same day. They went in and there were four blockages."

Harvel said he had no chest pain, no back pain. He just couldn't catch his breath.

"It was real scary," Harvel said. "I have high blood pressure anyway, but when they took my blood pressure, it was 270 over 170. It was rough. They did the surgery that Saturday and I was on a ventilator from Saturday until Tuesday evening when I became conscious again. I'm just blessed and lucky to have caught it."

Harvel, a behavior specialist who works with troubled youth, stayed home, took his medication and is now watching his diet and getting proper sleep. He said his coaching staff is excellent with 90 percent former King players.

"I haven't been out here for three weeks, no practice, nothing," Harvel said. "My doctors told me I could go back as long as I'm taking my medication and doing the things I need to do, watch my diet, get my sleep. I'm smarter now, knowing that same game film will be there tomorrow.

"My staff does a great job. About 90 percent of my staff are my former players so I trust them because they know what the King program is about. And, they kept in constant contact, calling me at night to tell me what was going on. My style, even before all of this happened, was to get it done during the week by watching film and working on the game plan. Then, they (assistant coaches) execute it and get it done on game day.

"And yes, it's great to be back again and I'm feeling good, real good. This is what it's all about and the kids are excited to face Cass Tech. We're looking to have another great game with them."

Corley and Washington will get their first taste of the King-Cass Tech rivalry, playing for a PSL title.

Corley is a transfer from Wyandotte and Washington moved to King from San Diego. They have joined forces to become the city's top passing combination and one of the best in the state.

"It's going to be exciting," said Corley of the PSL title game, then talking of his head coach. "It was great to have him back. When we didn't have him, we prayed for him. He's making some good changes in his life."

Corley, a four-star receiver with 4.5 speed, already has 15 Division 1 offers, including such national powers as Notre Dame, Michigan State, Michigan and Wisconsin. He attended the Rutgers-Ohio State game Saturday and said he plans to travel to East Lansing Saturday for the Michigan-Michigan State game.

"He's great on both sides of the ball," Harvel said. "He shuts down the opponent's top receiver, then on the other side he's our top receiver."

Fans are hoping to see a matchup between Corley and Cass Tech junior defensive back Lavert Hill, who has received offers from Ohio State, Michigan and Miami. However, Hill was sidelined Friday with an ankle injury and could miss the title game.

"You know us, we'll sit him, for sure, if he's not healthy," said Cass Tech coach Thomas Wilcher, pointing out Weber was in the lineup for multiple games earlier in the season with a foot injury.

"It was a real tough game," Sofran said. "It was tied at 7 at halftime and we were able to get the upper hand in the second half."

Sofran knows Rice will have to get big performances from multiple players this time around, especially since St. Mary's senior cornerback Tyson Smith (MSU) will be on the field after missing the first game with an injury.

"We're going to have to have other guys step up because Smith will be on Grant (Perry) this time around," Sofran said.

Michigan-bound Alex Malzone did just that this past Friday, throwing two TD passes to Brian Fortin in Rice's 38-14 win over U-D Jesuit.

Malzone set school records for completions (29) and yards passing (419) in the win over St. Mary's with Perry hauling in 14 for a school-record 257 yards. Perry also owns the single-season school record for receiving yards with 1,158.

"Grant Perry's had an outstanding season and they (Malzone-Perry) have great chemistry," Sofran said. "He's a Big Ten-type receiver and I don't know what the Big Ten coaches are thinking. Iowa, Indiana and Michigan have come on lately, talking to him and telling him he's on their list, but no offers yet."

Michigan coach Brady Hoke attended Brother Rice's game Friday to watch Malzone, along with defensive end/linebacker Jack Dunaway, who will be going to Michigan as a preferred walk-on.

Weber helped rally Cass Tech from a 12-0 fourth-quarter deficit to defeat East English Village Prep, 19-12, Friday in a PSL semifinal. He rushed for 216 yards, including 96 yards and three TDs during the final quarter.

14 – Sacks by Saline in its 49-0 win over Ann Arbor Skyline, including six by John Raupp.

20 – Consecutive wins by Muskegon Catholic Central after its 30-0 rout of Detroit Country Day.

"He thinks he's a defensive player (in college), but I told him he's an offensive tackle, especially after watching him block two guys, just push them away to get Mike (Weber) free."