Steel drum band will ring in the Nain Rouge

Steel drum band will ring in the Nain Rouge 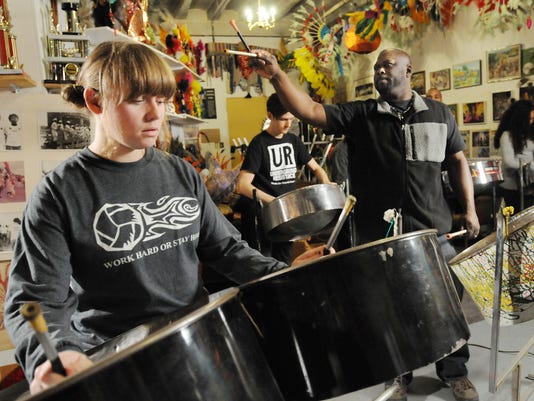 Molly Schneider, 16, and Corey Ciotti, 30, both of Detroit, follow instructions from Lyndon Sorzano at a rehearsal for the Caribbean Pans of Joy’s performance in the Marche du Nain Rouge on March 20. The dozen or so players come from all over the spectrum of experience playing the national instrument of Trinidad and Tobago.(Photo: Donna Terek / The Detroit News)Buy Photo

At his Detroit studio, Caribbean Mardi Gras Productions, Ralph Taylor has cleared away the giant Carnival costumes he designs and dusted off a dozen sets of steel drums he’d had in storage for years.

He and fellow Trinidadian Lyndon Sorzano are reviving their steel drum band the Caribbean Pans of Joy just in time for the Marche du Nain Rouge, Detroit’s unique end-of-winter celebration coming to Midtown next month. A group of 10-15 experienced and beginner steel drum players gather at the studio twice a week to rehearse.

Taylor, 73, owns the steel drums or “pans” and manages the band that had a good run playing festivals and events from 1997 to about 2003, when Sorzano peeled off to start his own band. Sorzano provides the expertise to teach anyone willing to learn the intricacies of the national instrument of Trinidad and Tobago, the island nation off the coast of Venezuela.

Taylor’s usual activity in his east side studio is designing and constructing parade costumes so large they need to be set on wheels, like wearable floats. (Watch my 2014 video of his creations.) Studio inhabitants include giant insects, mammoth sea creatures and garb so elaborate it could only be meant for off-world royalty. Taylor produced the Hip Hop Mardi Gras at the biannual Dlectricity Design Festival in 2014, and helped produce last year’s Marche du Nain Rouge.

The feathered headdresses and sequined butterfly wings float above the heads of the rehearsing musicians, making the scene a fitting combination of eye-popping visuals and exuberant vibrations that complement one another in traditional Caribbean celebrations.

Partnership of art and music

Lyndon Sorzano, 43, says the sound of steel drums was everywhere when he was growing up in Trinidad and Tobago. He played in a school band that won a trip to play a music festival in Inverness, Scotland, an experience he says still “feels like yesterday.” For a boy from a small island, meeting kids from all over the world was a real eye-opener. He eventually lived in Scotland, England, France and Japan, touring with his steel drums.

Returning from Japan in 1997, Sorzano went to New Jersey, where most of his family now lives, and joined a steel drum band called Pan Jersey. They were invited to play at the Detroit Festival of the Arts, and that’s where Sorzano met Ralph Taylor.

Regina Lawson, 66, of Detroit, loves everything about the Caribbean, especially the music. “It makes me feel like I’m in the islands, especially on a cold day,” she says. Lawson played in Sorzano and Taylor’s original steel drum band, the Caribbean Pans of Joy. (Photo: Donna Terek / The Detroit News)

Taylor invited him to his studio and began a campaign to bring Sorzano to Detroit to teach steel pan. “He kept calling me and calling me,” Sorzano laughed. “He said, ‘I have a group that wants to play.’ You have to come to Detroit.”

Sorzano finally relented and in 1997 they started the Caribbean Pans of Joy. The band played festivals and events for about six years until Sorzano started his own combo Uprizin Band, where steel drum was an accent to more traditional instruments and vocals. The band performs Friday nights at Kola, a Nigerian restaurant on Northwestern Highway in Farmington Hills.

Sorzano and his wife Terryann settled in Warren and he continued teaching the steel drum. He helped start a steel drum program at Oakland University and has been teaching the instrument at Rudolph Steiner School of Ann Arbor for the past 15 years.

Sorzano began rehearsals a couple of months ago with some steel pan veterans from the original Caribbean Pans of Joy and an equal number of rank beginners.

The players range from a high school student to a 73-year-old on any given Tuesday or Thursday night. Regina Lawson, 67, of Detroit, has been connected to the Caribbean community for years. She has helped Taylor with costumes and has danced, wearing them, in many of the parades he’s staged.

“It’s the music. It just gives me this wonderful feeling,” she says. “It makes me feel like I’m in the islands — especially on a cold day.”

Aaron Parrott, 32, Detroit, was only 11 when he began playing steel drums with Sorzano in the band’s first incarnation. “This is a unique kind of music for Detroit,” he said. “We can easily get put into a box here and get used to hearing the same type of music over and over, but Detroit is so diverse, we have different cultures. This music is something different.”

Taylor is having a flatbed “float” made to hold 10-12 steel pan players in the Marche du Nain Rouge on March 20.

“My costumes sometimes range from a shoulder piece to a costume which would be 20 feet wide and 15 feet high.” Now the costumes he’s designing for the event are being squeezed out to give floor space to the steel drums.

After the Marche du Nain Rouge, he hopes the group will continue to grow and move into its own rehearsal space so his costumes can take center stage in his studio again, or he’d like to gain funding to move “both pieces of this puzzle” into one large space encompassing the costume and float design — and the steel drums.

“So if anyone wants to support us by giving us a building, I would appreciate it,” he laughs.

“I’d like to have a 50- or 60-piece orchestra,” says Taylor. “I want to play on the same stage with the Detroit Symphony. That’s my goal.”

In colonial times African slaves lost everything from their heritage: their families, their native languages, even their names. The one expression of their culture available to them was their music.

But to keep their African rhythms alive they had to keep one step ahead of their former masters. Slaves were freed in 1863, but whites feared traditional drumming might contain secret messages inciting blacks to upset the status quo, so they banned it. Each time the ruling class banned a “subversive” instrument, the lower classes invented another.

In the late 1930s musicians turned to tin paint cans, cookie tins and steel barrels to produce beats. It became apparent to them that the steel instruments changed pitch after being beaten repeatedly and they began to develop ways of “tuning” them with targeted dents. The early steel drums were made from small containers with the bottoms pushed to a convex shape.

By the 1940s they were making larger instruments from the 55-gallon oil drums discarded by the oil refineries on the islands.

These drums or pans were cut down with bottoms pushed into a concave bowl. Musicians controlled the pitches or notes by hammering a depression a little deeper or shallower. The pans look a little like an inverted tortoise shell with notes outlined by depressions in the metal.

As in a choir or orchestra, certain pans play in a high range or a mid-range, including pans dubbed guitars or cellos. Full-sized 55-gallon barrels make up the bass section. Surrounded by six of them, the steel pan tympanist plays the bass line.

Although it’s best known for Calypso music, Sorzano insists the steel drum can be adapted to any genre. Steel drum orchestras have even played classical music at New York’s Lincoln Center.

About the Marche du Nain Rouge

The 7th Annual Marche du Nain Rouge begins at 1 p.m. Sunday, March 20. Marchers will gather at Second and Canfield in Detroit and proceed down Second Avenue for about nine blocks to Temple, turn right and end in front of the Masonic Temple, where Le Nain Rouge will address the crowd. Revelers will be invited into the Temple for an after-party with refreshments for sale.