One game into one of their two six-game trips this season, the Red Wings have a significant advantage in the standings. 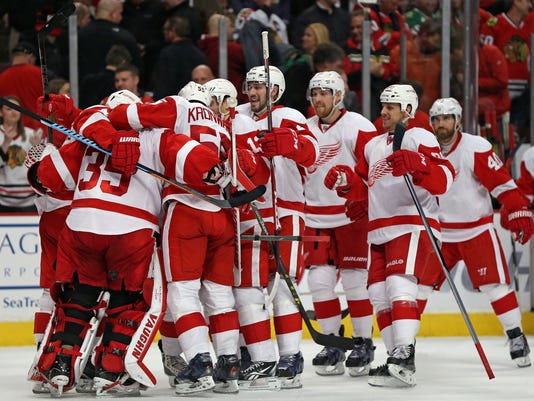 The Red Wings helped themselves with their victory over the Blackhawks Wednesday, but the Panthers are gaining ground on them.(Photo: Jonathan Daniel / Getty Images)

Detroit — The Red Wings season is at a critical juncture, with five games remaining in a grinding six-game road trip that has them playing some top teams in the Midwest, on the West Coast and in the South.

Here are five things of particular note, at this juncture:

No one suggests the Wings ease off the throttle, or that giving into fatigue during the doldrums of the late-February NHL schedule would not hurt their cause.

But one game into one of their two six-game trips this season, they have a significant advantage in the standings.

Unlike the previous three seasons, when they were nip-and-tuck for the final playoff positions, they started the trip 12 points ahead of the Panthers, the first Eastern Conference team lying out of the playoffs.

The gap is now 10, after the Red Wings beat the Blackhawks and Florida won two one-goal games against the Maple Leafs and Canadiens.

A less than expected performance against the Stars, Ducks, Kings, Sharks and Predators on the road, between now and March, would make the last 21 games of the season both more challenging and more critical.

But there is perhaps no greater measure of the Red Wings success in their "rebuild on the fly" than the standings.

There are symptoms of the need to improve for any deep run in the playoffs.

In recent games against teams capable of countering the Wings speed with considerable pace of their own, along with some size, the Red Wings have been a bit exposed.

The Black Hawks, especially in the first half of the game, the Canadiens, the Jets and the Lightning have made the Red Wings look average and worse, for significant stretches.

Unless they are at about their best, some teams can outpace them, while winning the physical battles.

They have been reminded.

It is the dog days of the NHL season. The Red Wings have surpassed seemingly everyone's expectations — except, perhaps, their own.

Are they tired, as in "fatigued?"

But the ability of some teams to "skate them" recently, despite the fact that speed is among the Wings' best weapons, may well be evidence of playing in games 50 through 60 in a long season.

If it is fatigue, Mike Babcock almost certainly knows and will try to help, by adjusting the schedule.

And, in the scheme of things, a second wind is likely on the way.

It often refreshes teams around the start of March.

And if you are a goalie, it means rust collects.

Howard admitted to some lack of timing against the Canadiens, and despite a huge effort to hold the fort against the Blackhawks and winning the game in the pesky shootout, one could still observe a little oxidation.

Conversations, if not controversy, reigned about what to do with the three goalies.

Absent a fortuitous trade, they did precisely as they should.

Howard, their proven No. 1 and a playoff performer having perhaps his best season before he was injured, is the top hammer between the pipes.

Jonas Gustavsson remains a valuable backup, who pushed Howard with a fine performance last season that was essential to making the playoffs.

Petr Mrazek can work on his skills and remain hot as the Griffins mount a run to the postseason. If injuries strike, he will be even more prepared, this time.

Howard is the key.

Before what appeared to be a truly horrific injury in early January in Washington caused a five-week disruption, he was at about his best.

If Howard can recover it and persist, the Red Wings could be awfully tough in the prospective playoffs.

It would be nice, but let us not hold our breaths.

If the Wings can muster a trade that both improves their prospects in the postseason without mortgaging much of the future, it will be enormous news.

But no group of people would think it bigger than the 30 general managers around the NHL who sit around thinking, "Man, remember when we could make some big deals at the deadline?"

With the roster redeveloping, the Wings are beginning to reach critical masses at some positions, suggesting that moves can be made.

Eventually, they must be made.

But the leveraging must be wise, and the next moves are critical to the success of all of this rebuilding on the fly.

With so much attained on the project, so far, frittering it away would be splendidly foolish.