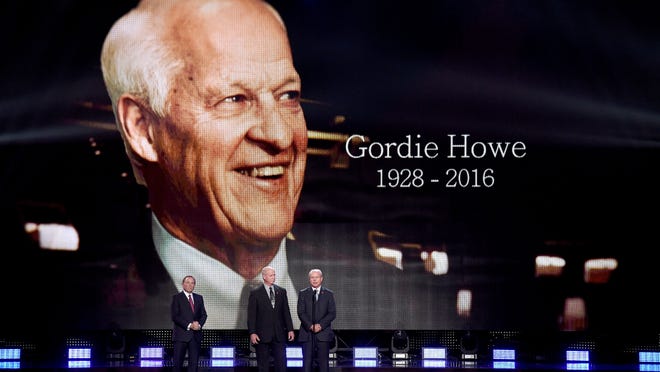 Detroit — To say the Red Wings could use a bit of a boost understates things.

After what was likely the worst performance of 25 consecutive seasons of qualifying for the playoffs, the general manager and coach announced their disappointment two months ago.

They both asserted the need for change.

Ken Holland said he would be aggressive in seeking alterations to a roster starkly challenged to match its level of talent with other playoff qualifiers, let alone true contenders for the Stanley Cup.

Jeff Blashill said the club needed to foster greater contentment among the players with their roles.

Then, consistent with his leaked and then announced (sort of) intentions, one of a handful of the greatest players in the history of the franchise retired from the NHL — or resigned from the Wings, depending on your point of view. But it was the context Pavel Datsyuk and Holland revealed that provided particular instruction about the status of the franchise.

Since 2012, when Nicklas Lidstrom retired and the owners locked out players the last time, Datsyuk was not happy.

Oh, we can take him at his word, there was a lot going on in his life and career. Regardless, he was not happy playing for the Red Wings.

It is unsettling enough to force one to ponder: Is a full rebuild — i.e., strip it down, lose, accumulate draft choices, use picks wisely and remain patient for development — a more realistic strategy?

And while they certainly are far removed from issues of on-ice performance, the death of the man and player who imbued what feels like eternal greatness in the franchise, Gordie Howe, and the pending last season of Joe Louis Arena, the functional-at-best old barn where they won four Stanley Cups and birthed an era of greatness rivaling Howe’s days at the Olympia in the 1950s, adds to the atmosphere of melancholy.

Disconcerting emotions or not, the Red Wings need to make some moves.

Before Datsyuk made it official and left the formidable loose end of his $7.5 million cap hit hanging, the Wings requirements were considerable.

They needed two top defensemen, arguably a No. 1 and a No. 2, given the decline of Niklas Kronwall, the development of Danny DeKeyser, and the defensive competency of Mike Green.

They also needed a top scorer.

That is a shopping list longer than one likely filled in one offseason. It is a tall demand for any 12 months under the current rules.

But two months later, they need all that and to replace a talented, aging two-way center still capable of both 50 points and considerable defense against the opposition’s top player.

And, because of Datsyuk’s discombobulated departure, the Wings salary cap is just above 10 percent less than the maximum allowed by the NHL and to the lion’s share of their competitors.

The problems are various and big. The first step should be singular and small.

The Red Wings should set as a goal a roster of players who will be happy with their tasks, who understand this is not their father’s Wings team, and that no small amount of rebuilding is occurring and likely to continue.

While so much focus is on Steven Stamkos — with multiple, reliable sources reporting the Rangers and Red Wings are likely among those in the running for the talented, high-powered Lightning goal scorer — a couple defensemen to shore up the back end would be enormously valuable.

The needs are varied and ample enough that something less striking than landing Stamkos might also be effective enough to improve their prospects next season.

But with so many teams targeting improvements along their blue lines, the Wings quest for defensive help is likely banging up against both intense competition around the NHL and their own problem with the salary cap.

And then there is the matter of trading a goaltender, presumably Jimmy Howard. With the potential availability of two big performers in net — Ben Bishop of the Lightning, and Marc-Andre Fleury of the Stanley Cup champion Penguins — Howard’s attractiveness to franchises willing to part with the talent the Wings desire to upgrade in goal (Flames, Stars?) is likely lagging.

Regardless, there is no doubt the next two weeks are critical to the Wings’ prospects for next season and beyond.

Moves adding up to blockbuster certainly would be welcome.

But the Red Wings should be less concerned about forestalling decline than kindling their new ascendency.

They need new, fresher mentality in the room, on the plane, on the bench and on the ice. It is tough to accomplish if those playing are more affected by wanting things to be as they once were.

They will not be until the roster supports playing in a conference final at least occasionally.

And do not underestimate the work of merely making the roster a bit happier and more competent on the eve of a fifth season of a self-professed “rebuild on the fly” and their last in their storied, old arena.

Moves like that will be difficult enough to realize.