Irish Hills track is seeing a decline in attendance, which may be partly related to late start times 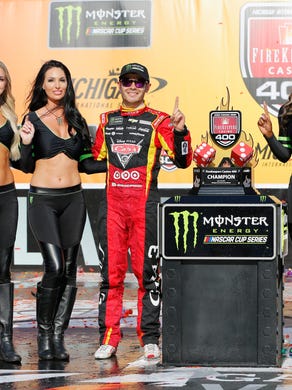 The pit crew of Jimmie Johnson, driver of the No. 48 Lowe's Chevrolet, huddle before the race. Jonathan Ferrey, Getty Images
Fullscreen 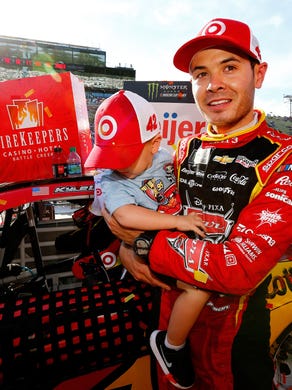 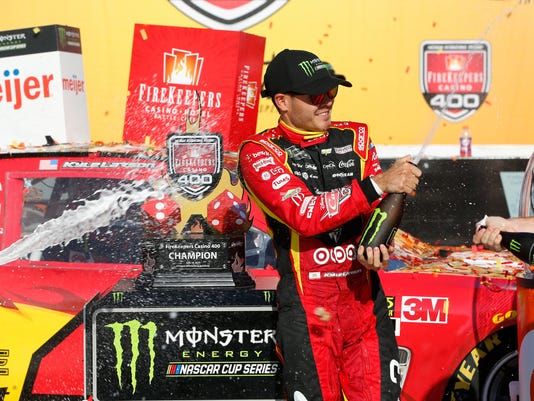 Brooklyn, Mich. — Tons of speed at the blazing fast Michigan International Speedway, 10 lead changes in the Cup race Sunday and lots of passing made for some good racing.

The additional good news for MIS, NASCAR, its broadcast partners and sponsors is relatively new, young drivers winning and staking their claim for a new generation in the sport, and legends like seven-time champ Jimmie Johnson signing on for another three years, at least.

The FireKeepers Casino 400 exhilarated Sunday, with a five-lap shootout and the end and contentious racing throughout.
Kyle Larson bested Chase Elliott for the second consecutive NASCAR cup race at MIS.

“Late in the race, we were just able to line up in the right lanes,” Larson said, commenting on the importance of staying in the narrow race groove at MIS.

“Seems like since my rookie season, we’ve always had fast cars here at Michigan.”

So, why all the empty seats?

MIS does not release attendance figures, and would not again Sunday.

But judging from the races last season and in 2015, which already had noticeably smaller crowds, the audience Sunday diminished yet again.

It is no secret that NASCAR came to town limping.

Attendance is down. TV ratings are, generally, too.

NASCAR, media partners and stakeholders scrambled in the offseason to restock. They changed the racing format to add stages, making it three shorter races in one long one.

But it is not clear whether it is working, or what is to be done in the long run to rekindle, or perhaps even sustain, the popularity of the sport.

It is too bad because the racing is pretty good.

There are a few things that could improve around MIS and NASCAR. But with all the exciting racing and the crowds increasingly meager, one has to wonder if it would matter.

While broadcasters sought the 3 p.m. starts, it gets fans back home in many parts of Michigan and Ontario close to 9 p.m, or later, with Monday morning beckoning.

Word from NASCAR and MIS officials is that TV executives think having the end of races closer to prime time will draw more viewers.

But they tried that a decade ago and went back to 1 o’clock starts.

While it rained heavily four hours before the race, a bit in the early afternoon and seemed to threaten until about 90 minutes before the green flag, at 3:16 p.m., weather predictions were favorable for race time, even Saturday night.

All NASCAR said about it, attributable to “NASCAR officials,” seemed fairly oblique: “NASCAR works closely with the track and our broadcast partners to build a weekend event schedule that’s most advantageous for fans.”

Well, it certainly is true that there is more revenue in broadcasting rights than at the gate.

Meanwhile, the racing is good and MIS is among the finest NASCAR tracks in the country. But there is a singular blemish:

The racing groove never quite widened, as expected, on what is a comfortably wide track, after the fourth repaving of the racing surface six years ago.

A narrow racing groove dictates that while the speeds are high, there would be even more lead changes, passing and even more exciting restarts, if it was wider.

“I knew the top would be the best place to restart,” he said, of the preferred track position.

But, because of the narrow groove, the critical restarts can cost drivers and teams the race, even if they have faster cars, simply because the order out of the pits dictates they started low on the track.

“I knew I was going to have a tough time on the bottom,” said Denny Hamlin, who finished fourth in the first and second stages and may have had a fast enough car to win, if he had been able to use more of the track to get 'round people.

“Everyone did have a tough time on the bottom.

“It’s definitely tough, you know?” Hamlin said. “The biggest thing is, you try to minimize how many spots you love versus how much you gain.

“I tried to carry speed in there, and obviously I got sucked around and just tried to minimize the losses, at that point.”

MIS and NASCAR repeatedly bring in tire dragging equipment from the track in Kentucky — eight times again this year, to try to wear in a groove in the six-year-old surface. It is perhaps a bit better, over time, many of the drivers say.

Adding one race a year, from the IndyCar Series, might help wear in the groove, too, with all of the additional practices, qualifying and racing.

But if fans are staying away because they are not excited, more excitement might help.

So would one o’clock races.

Would the two changes stem the decline of the popularity of the sport? Probably not.

But it might restore some of it at MIS.