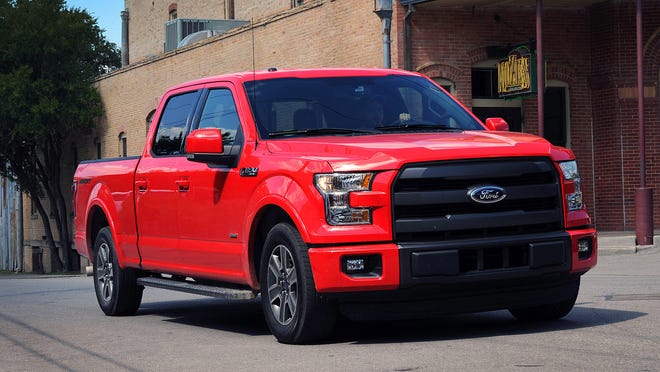 These two aluminum-skinned, alphanumeric-badged industrial behemoths signal that Ford Motor Co.'s ambition hasn't shrunk in 70 years. Both use lightweight construction to increase range. Both push the limits of mass manufacturing. Both elevated Detroit's industrial genius. The B-24 defined the chairmanship of Henry Ford's only son, Edsel Ford. The F-150 will define the legacy of his grandson, William Clay Ford Jr.

In 1941 Edsel met the federal government's challenge and committed Ford's Willow Run factory to making the B-24 Liberator as a weapon to win America's war with Germany. In 2014 Bill Ford has risen to the challenge of federal mpg standards to convert Ford's Dearborn and Kansas City F-150 assembly plants to aluminum construction to win the war against ... um, global warming. OK, so Washington's wars these days are a might quixotic. Ford's brilliant engineers have translated the challenge to win the conflict that really matters: Defeating RAM, GM and Toyota in the truck wars.

Only compared to the B-24 does the F-150's task seem small. The Liberator program, after all, sought to make a one million-part bomber an hour from scratch in 18 months. It is one of the supreme industrial achievements of mankind. But the F-150's ambition shares B-24's challenges in key respects. It carries huge risks. It requires enormous industrial retooling to produce 70 trucks an hour — 600,000 a year. It must prove itself in a highly competitive theater.

In 1942 Charles Lindbergh test-flew the first B-24s over Willow Run. The plane was uncomfortable and handled like a pig, causing his arms to ache from exertion. It was "more complicated than the keyboard of a pipe organ," he wrote in his diary.

The F-150, you'll be pleased to know, drives like a limousine.

But for its Brobdingnagian dimensions, the sophisticated F-150 cockpit could be confused with a similarly-priced, $40K luxury sedan. The seats are plush, the ride hushed, the instruments sculpted.

My favorite F-150 is a $46,600 XLT. Its huge three-bar grille growls. Its "c-clamp" headlights intimidate. This is an aluminum truck all right. Military-grade aluminum. Opt for the steering column shifter, and the full center console is a bin of storage trays for phones, drinks, briefcases, small farm animals. The storage compartment at my elbow could hide a Mini Cooper.

Sitting atop a completely re-engineered chassis, suspension, and body, the big truck glides down the road despite its leaf-sprung, solid-rear axle chassis. Credit staggered rear shocks, eight chassis-stiffening cross-members, and twin frame-rails firmed with 78 percent high-strength steel (up from 28 percent in the outgoing model). That light-weighting theme runs throughout the truck, making it more nimble, more capable, and more fuel efficient.

This light-alloyed heavyweight weighs in a fit 700 pounds less than its predecessor — even as its cabin is stuffed with more technology than an Apple store.

The pickup market is the most demanding segment in autodom as customers need a daily driver and a workplace tool. These vehicles are rolling Swiss Army knives — they'll take the kid to school while carrying a load of mulch while recharging your band saw.

Consider the Ford's side mirror.

Approach it in darkness and an LED drops a pool of light for ground visibility. Another bulb turns the mirror into a rotating spotlight, illuminating the landscape. Embedded sensors alert you to traffic in your blind spot. And mirror cameras help form a 360-degree view around the truck's perimeter. Give this tool a first place blue ribbon at the science fair.

The Big Four truck warriors are representative of their corporate brands. Toyota's Tundra is perennially atop J.D. Powers' quality ratings. Chrysler's RAM has carved a loyal following with its innovative eight-speed gearboxes and coil-sprung suspension.

Ford and GM are the titans. The volume sellers. The F-150, for example, comes in everything from a $26,616 two-wheel drive base cab to a $52,155, leather-skinned, luxury, 4x4 Super Crew Cab that can scale the Empire State Building while giving you a back massage.

But with the aluminum F-150, you sense a watershed moment.

Aluminum is just half the story as Ford has also developed a formidable artillery of new turbocharged engines. Where four huge engines carried the B-24 aloft, four engine options power the F-150.

In keeping with its light infantry theme, the pickup's mix has changed from the previous generation's two V-6, two V-8 lineup. Only one V-8 remains (the 5.0-liter with more horses and torque — 385 and 387 — than before). With the success of the base six-banger and Ecoboost V-6, Ford has ditched the 6.2-liter V-8 to add a third V-6 to its lineup. The rookie is Ecoboost Junior — a precocious 2.7-liter twin turbo that packs a 325 horsepower, 375-pound feet wallop.

While the V-8 gives the F-150 best payload-in-class and the 3.5-liter turbo boasts best tow capacity, Ford expects Junior to take the truck to the summit of a different metric: Fuel economy. When EPA numbers come in next month, the 2.7 is expected to challenge RAM's 3.0-liter diesel for top fuel sipper. My media mates were recording 21-22 mpg on our San Antonio-area test drives — in the ballpark of RAM's 23 mpg benchmark.

Not me. I was gulping gas over a, muddy, gulch-filled off-road course. Short of pulling Gs in a sports car on (name of race track here), there's nothing more fun.

South Texas ranch country and I punished the new sled through gulch, grade and goop. This is no tin-skinned B-24, but a rock-solid, 6000-series-military-alloy aluminum brute. With four wheels churning and twin turbos spooling, the 4,806-pound rhino never protested. Hopping out of the truck after the test, I slammed the doors and tailgate with abandon. Not a tinkle.

The B-24 answered the critics over time. The F-150 will have to do the same. Will the 1,500-repair shop infrastructure be able to mend aluminum as efficiently as steel? Will insurance rates increase? Will turbos prove as durable as diesels?

These are formidable challenges. But thanks to Ford's risk-taking culture, we are watching history in the making.