The Z06 is a big, tail-wagging, mountain of power. But with stick. 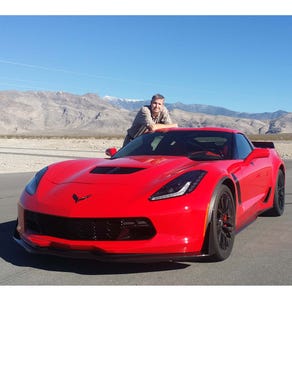 This is the first Corvette Z06 to offer a supercharged engine, paddle-shift automatic transmission, a convertible model and a coupe featuring a removable roof panel. Henry Payne/ The Detroit News
Fullscreen

With the available Z07 package the Corvette delivers 0-60 mph acceleration in 2.95 seconds with the eight-speed automatic and 3.2 seconds with the seven-speed manual transmission. Chevrolet
Fullscreen

The aluminum structure is 20 percent stiffer than the previous, fixed-roof Z06. As there are no structural reinforcements needed for the Z06 Convertible, it has a nearly identical curb weight as the Z06 Coupe. Chevrolet
Fullscreen 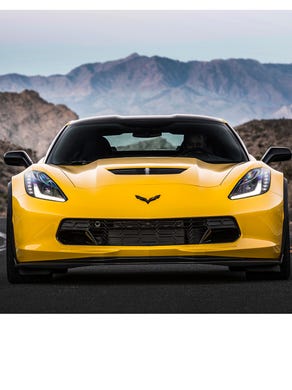 The exterior design also reflects the increased cooling required for the new Corvette Z06. For example, the mesh pattern on the front fascia was painstakingly designed to deliver the most possible airflow to the supercharger's intercooler heat exchanger, so much so that the mesh grill directs more air into the engine bay than if the grille was removed. Chevrolet
Fullscreen

The unique grille also features dedicated brake-cooling intakes and wider grille outlets on the bottom serve as air diffusers. The grille is complemented with a larger hood vent, which vents hot air from the engine compartment and contributes to downforce by allowing air driven through the grille to exit through the hood rather than being forced under the car, which could create lift. Chevrolet
Fullscreen

To deliver the levels of grip needed for the Z06's performance targets, the car was fitted with larger Michelin tires (Pilot Super Sport tires for the Z06; Sport Cup 2 tires with the Z07 package). The P285/30ZR19 front tires are 1.5 inches wider than the tires on the Stingray, while the 335/25ZR20 rear tires are two inches wider. Chevrolet
Fullscreen

In an effort to increase the Z06's levels of aerodynamic downforce the car features a front splitter, spats around the front wheel openings, a unique carbon-fiber hood with a larger vent, and a rear spoiler. Chevrolet
Fullscreen

The 2015 Corvette Z06 features an all-new LT4 engine. The supercharged, 6.2L V-8 will deliver more than 625 horsepower, and 635 lb-ft of torque. Chevrolet
Fullscreen

Inside, the Corvette Z06 is distinguished from the Corvette Stingray by unique color schemes that emphasize the driver-focused cockpit, and a unique, flat-bottomed steering wheel. The all-new, industry-leading Performance Data Recorder enables users to record high-definition video, with telemetry overlays, of their driving experiences on and off the track. Chevrolet
Fullscreen

To cover the wider tire tread, the fenders of the Z06 were extended by 2.2 inches (56 mm) at the front, and 3.15 inches (80 mm) at the rear. These extensions give the Corvette Z06 a wider, lower appearance further emphasized by a unique rear fascia. Chevrolet
Fullscreen

Payne calls the Z06, "An affordable, freakishly-capable megabot with the performance of cars costing five times as much." Henry Payne/ The Detroit News
Fullscreen

On the limit of grip — the 6.2-liter, supercharged V-8 howling like Cerberus in my ears — I modulate the Corvette ZO6's throttle across the uphill, Turn 2 sweeper at Spring Mountain. But the hungry beast wants more. More throttle?

Payne, it seems to say, don't you know I am the most capable production car in existence? That your pals at Car & Driver have recorded my 1.19 lateral G-forces higher than a Porsche 918 hybrid? Higher than a Nissan GTR?

I oblige with every passing lap. Which means that at 6,400 RPM I snatch fourth gear — 122 mph — at the top of the hill going into Turn 3, a 180-degree downhill right-hander. BRAAAAKES! I stomp on the binders at the way-too-late marker and giant Brembo calipers seize 15.5-inch carbon-ceramic front rotors with the force of a Rottweiler on a postman's leg. The coupe slows like it hit an invisible wall. My chest strains against the seat belt. My eyeballs bulge from their sockets. But the Z wants more. Brake later? Are you mad?

Fool, don't you know that I can brake with any exotic car on the planet? A heart-stopping 128 feet from 70-0 mph? Better than a Porsche Turbo? Or a Ferrari 458?

And so it goes lap after lap trying to find the limits of this extraordinary, $78,000-plus super car. Exhilarating. Addicting. But how is this possible?

After all, we're comparing the Corvette to the most technologically advanced weapons on the planet. Cars with carbon-fiber tubs. All-wheel-drive. Overhead-cam, turbocharged, made-with-Unobtanium, flux-capaciter cyborgs sent here by Skynet from 25 years into the future.

I mean, the Z06 still has its engine in the front like a truck, for goodness sake. And it uses antique push rods. And leaf springs (yeah, I know, Chevy calls 'em "tranverse-mounted, composite springs" but every motorhead knows they're leafs). The thing should be retired to the Smithsonian.

Well, hold the retirement party. The 2015 Corvette Z06 is the real deal.

Credit an engineering team lead by Tadge Juechter who has Pratt & Miller's Doug Louth, chief engineer of Corvette's racing program, on speed dial. The seventh-generation, $53,995 base Corvette C7 Stingray was conceived with the Z06 performance package and LeMans racing in mind. Would Juechter & Co. have use more exotic suspension geometries and engine tweaks if it had twice the budget? Who knows? Who cares?

Squeezing every ounce of nutrition out of a front-engine, push-rod, transverse spring recipe it has perfected over three generations of car, Juechter's geniuses then cooked their big sirloin steak with the best spices from Brembo and Michelin tires. The result? An affordable, freakishly-capable megabot with the performance of cars costing five times as much.

But the Z06 is more than quick. It's comfortably quick. I was skeptical that this was possible. After all, I've driven Vette-zilla.

Vette-zilla was the 2007 ZR1, the last generation, C6-based Z06 on 'roids. The most capable Corvette ever produced. With a 6.2-liter, supercharged V-8, 638 horsepower and all the tricks from the Brembo and Michelin magicians' hats, the $110,000 ZR1 could run with the exotics. But it would wear you out in the process.

Like riding a bull through Pamplona, Vette-zilla roared and stomped and threatened to throw you through the window. It sweated 20 pounds out of you — but sweet speed was your reward. The '15 Z06 tames Vette-zilla's moods. Smooths its raw edges. And goes quicker. Nearly five seconds a lap quicker in GM's VIR test.

On Spring Mountain Raceway I feel it instantly. The Z06 not only doesn't generate as much lift as the squirrely ZR1, it makes 350 pounds of down force. Paired with an all-new aluminum chassis and 12-inch Michelin gummies, the Z06 is still a big, tail-wagging, mountain of power. But with stick.

"The difference from the ZR1 is that when you turn it in to a corner, it plants," says ex-IndyCar driver Richie Hearn, who flogs Vettes at Spring Mountain's Ron Fellows Driver's School for a living,

That nimbleness has turned the old Detroit vs. Europe formula on it head.

"Detroit once made the drag queens," says Juechter. "Europe the cornering kings." Now, with hybrid-torque and all-wheel drive, Euro-sports like the 887-horsepower Porsche 918 stomp the big 'Vette from 0-60. But without the weight of batteries and electric motors, the Z06 is lighter — easier to toss across apexes.

But don't be fooled into thinking the 'Vette is a tinny lightweight. At 3,524 pounds it is actually heavier than the last generation Z06 and ZR1. Wider and longer, the new car is stuffed with luxurious interior materials, media infotainment, four airbags, and a video Performance Data Recorder to play back the fun bits. They'll be plenty.

With its race-breeding, you buy the Z06 over the base Stingray for weekends at the track ("You're going to Waterford Raceway again this Saturday, hon?"). But the other days of the week, the Z06 is a luxury chariot. Unlike the single-minded, Z06/ZR1 hammers of yore, new Z06 owners (they went on sale in November, get in line) can have their cake and eat it too.

The Z06 is available in an automatic and a convertible with no compromise in performance. The convertible gains no weight over the coupe. The automatic loses no speed. Indeed, relates Juechter, when pro-drivers tested the Z06 at Road Atlanta last fall, they recorded faster times in the eight-speed automatic vs. the seven-speed manual.

"I got to admit it," says Indy racer Hearn after cranking off a lap that had me gripping the door handles, "I prefer the automatic to the paddles."

GM product guru Mark Reuss nicknamed the Z06 "Big Nasty" for its fearsome capabilities, but the bandwidth of this beast is astonishing.

Cruise to church with your best gal in its sumptuous, leather seats and dual climate control on Sunday morning. Wake cemeteries with 3,000-RPM thunderclaps through lake country on Sunday afternoon. Supercars are supposed to come with super sticker prices. My Torch Red (or is it ticket-me-red?) Z06 with Z07 performance package and competition seats still goes out the door for less than six-figures. Less is more with the Z06.