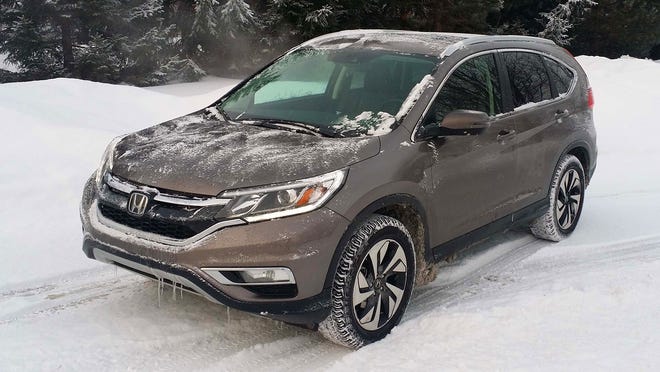 We Americans don't like station wagons or hatchbacks. But jack 'em up, stick high chairs inside, and change their name to "sport utility vehicles," and we'll buy them faster than Garth Brooks concert tickets.

The station wagon is dead, long live the station wagon. Once a popular hatchback version of the common sedan, the wagon has risen from the ashes as a full-blown class of its own: The SUV. So popular have wagons — er, utes — become that sedans are now the endangered species. Go figure.

The compact Honda CR-V sport ute is Exhibit A in this turn of events.

Don't be surprised if you wake up some morning soon to find that the CR-V has outsold the Toyota Camry sedan as the best-selling non-pickup in America. Surprise! It just did. December 2014 sales: CR-V 32,369, Camry, 31,618. Camry still won for the year, but ... when and if the CR-V passes it, it will only confirm a long trend. SUVs — can we call 'em SWIDs (Station Wagons In Drag)? — outsold sedans for the first time in 2014 and now share the same clothing racks as sedans from SMALL (Honda HR-V vs. Honda Fit) to XL (Ford Explorer vs. Ford Taurus).

I ruminated over this phenomenon with marketing guru Jim Morrison of Jeep, the company that birthed the car-based SUV. In Europe, theorizes Professor Morrison, the station wagon is still the family choice because the daily, no-speed limit Autobahn commute is done at the average speed of the Daytona 500. Performance is at a premium. In the 70 mpg U.S.? Not so much. Which means Euros want a wagon's low center of gravity, while Americans want to sit up high so they can see what neighboring drivers are texting on their iPhones.

No doubt. But Europe is also experiencing its own SUV revolution — witness Morrison making the subcompact Jeep Renegade in Italy for European consumption. Yes, the Continent has the ute bug. Sure, the Euros will drive smaller SUVs (the Renegade could fit in the center arm rest of a Chevy Tahoe) given their wallet-flattening $8-a-gallon petrol prices, but they're human too. And humans like sitting up high.

In industry speak, the H-point is the height of your hips off the ground. Humans like to sit with their hips no higher than their knees (look at that armchair you're in). Sedans are unnatural, people. No one understands this better than Honda, a company once known for quirky fun-mobiles like CR-Xs and S2000s — but that now makes payroll by selling everycars to everyman.

The CR-V was the first compact SUV in the business and is Exhibit A in how Honda creates customers for life.

The 2015 in my driveway is the fourth generation of CR-V, following its segment-busting intro in 1997. The CR-V hit the market G-SPOT: A roomy, all-wheel-drive, family friendly recipe still small enough to maneuver in tight urban canyons. Marinate in legendary Honda reliability and the vehicle was crack for the middle-class.

The CR-V cuts a wide demographic swath: Soccer moms, young urban dwellers, arthritic boomers who can't get out of a sedan without calling 911. And when the lease was up, why risk another brand when the CR-V is so doggone reliable?

The formula is being tested, however, as competitors have gained in durability and surpassed the shoebox-shaped CR-V in sex appeal. In its ambition to become a sales volume leader (Honda is the retail sales leader in a remarkable four of the six segments in which it competes), Honda forgot the fun factor somewhere back at that rest stop near Sandusky.

It's as if Kid Rock began playing Brahms. Frisky Honda had gone nerd.

Ford filled the vacuum with ST hot hatches and creative Escape utes. The AWD Escape was a pair of Air Jordan high-tops to the CR-V shoebox. So just three years after its 2012 do-over, CR-V designers got a 5 a.m. reveille. Honda calls it "the most significant mid-model cycle redesign in the CR-V's 17-year history."

It shows. The makeover begins with a Kia Optima-like wraparound grille and headlamps. Ol' four eyes used to look as homely as a pimply teen. Now the chrome, bezel-wrapped specs look like something out of the X-Men's Cyclops catalogue. The ute's chin mirrors the bezel line — giving the CR-V an aggressive, bullet-like nose with plenty of curb clearance. In back CR-V takes a page from the cool hatch crowd with tapered C-pillar glass. Damn the rear-quarter visibility. That's what blind spot assist is for ("Engage the deflector shield, Scotty!" The CR-V is wrapped in high-tech safety systems).

Inside, the exterior cues translate nicely to a flowing dash converging in a narrow, center-shifter exclamation point. Function follows form, and the dash curves opens plenty of space for this tall passenger's knobby knees.

Unfortunately, the CR-V's instruments team didn't get the wake-up call.

Instrumentation feels a generation behind interiors in the Escape, Chevy Equinox (or Camry sedan for that matter). The seat-heater buttons look glued on. You need a magnifying glass to see the telematics-control buttons. And Honda insists on a second dash screen that contains ... the time and date?

Typical of Honda there are driver-friendly touches like multi-shelf door storage, console dishes for smartphones, and sliding cup holders. But Escape still feels a step ahead. Its rear seats fold flush for optimum storage — for, say, that 20-something's first flat-screen TV. CR-V seats stubbornly refuse to flatten. And once you've used the Escape's "foot kick" rear hatch opener there's no going back.

The Ford is pushing CR-V for best-selling ute in America. That's a good thing. Look out, Camry, you may have eight sets of tire marks over your hood.

Navigating Metro Detroit in 2 feet of snow, I could count off the CR-V advantages over a Camry or Honda Accord sedan. Sure-footed AWD. Better passenger access. More head room. More hatchback utility. Comparable fuel economy. And perhaps most significantly to this longtime sedan snob: A tight CR-V chassis. Despite its higher center of gravity, body roll wasn't intrusive until I pushed the envelope. And envelope-pushing benefits the CR-V's all-wheel drive.

Warning to sedans: The SUV in your mirror is closer than it appears.