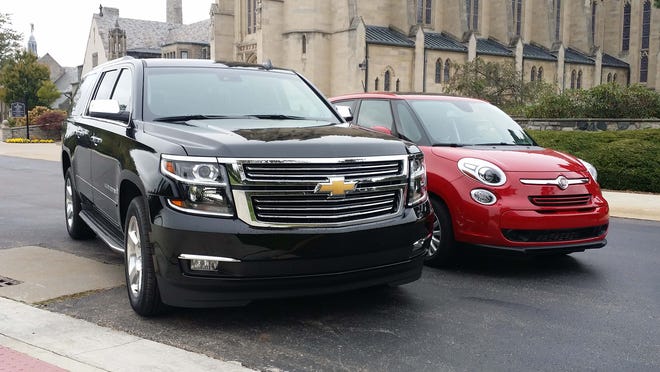 When Pope Francis arrived at the White House in a Fiat 500L station wagon last month, media reports buzzed about his humble, fuel-sipping, little ride. Well ... maybe “little” when compared to the giant, Secret Service Chevy Suburbans that usually ferry Washington dignitaries. Or the custom-built, gas-guzzling Cadillac limo — Secret Service code-name “The Beast” — that President Obama tools around in (when he’s not in one of two, presidential-sealed Suburbans).

Or maybe the pope’s Vatican team went out and found the biggest Italian car sold in the States.

As prominent members of the Save the Polar Bear Club, the pope and the president might prefer, say, a battery-powered Fiat 500e subcompact (EPA rating: 116 MPGe) and a plug-in electric Chevy Volt sedan (EPA rating: 106 MPGe). But circumstances demand the opposite.

Our leaders, it turns out, are no different than the rest of us when it comes to selecting their transportation in cheap-gas, big-avenue America: They prioritize practicality and comfort (and if they can wave the flag of a domestic brand, all the better).

I drove a 500L and a Chevy Suburban side-by-side for a week to gain the perspective of pope and prez (or at least their chauffeur) — and the vehicles they are endorsing for America.

Two feet longer and a half-foot taller than a Fiat 500, the L (for Large, introduced in 2013) got the free-advertising gift of a lifetime: A papal ride before a TV audience of millions.

Truth be told, Fiat dealers would probably have preferred the pope in the all-new, 2016 Fiat 500X small ute which promises more success for the beleaguered brand — even though it’s marginally smaller than the Large. We Yanks are ga-ga for crossovers.

Still, the pope’s visit has given the tepid-selling L a shot in the arm. Kelley Blue Book’s website recorded a 50 percent spike in searches for Fiat and the 500L after the pope’s visit. “We’ve been inundated with calls,” Kathy Finn, brand manager for Fiat Chrysler, told Bloomberg News. “Customers are calling surprised at how spacious the car is.”

Francis isn’t the first headliner to endorse the 500L (remember P. Diddy’s desert mirage ad?), proving products aren’t sold on celebrity alone. Still, the 500L is worth a drive. Like its competitors in the Multi-Purpose Vehicle (FCA’s preferred name — anything but “station wagon”) segment, the L is a different animal.

While the 500L bears Fiat’s familiar, baby-cute face (is that a pacifier stuck in its grille?), the body behind it is less Fiat 500 and more Chrysler Town & Country. Honey, I shrunk the minivan!

The massive greenhouse has more glass than Notre Dame. And unlike the Paris cathedral’s stained panes, you can see right through the Large, making for excellent driver visibility — and views of waving popes. Fiat even added windows on the corner A- and C-pillars for better visibility. Include the optional moonroof on my tester and the pope has an unobstructed view of heaven from the backseat.

Speaking of rear seats, the L has plenty of room for this 6’5” ex-basketball player, much less the 5’9” Francis. They’ll tumble or fold flat, too, opening up the already ample 23 cubic feet of trunk volume. And the L comes with an excellent Beats stereo system — in case the pontiff wants to chill to some Diddy.

From a distance, both the Suburban and 500L look like shoeboxes. And that’s about the only thing they share.

“Hey, Mark Wahlberg. Shut up!” yells an annoyed theater-goer trying to get the attention of Amy Schumer’s noisy, muscular boyfriend in “Trainwreck.”

That’s the Suburban. If the 500L is a supersized 500, the Chevy’s rear hatch looks like it could swallow it in one bite. Where the L let’s the sunshine in, the Silverado truck-based Suburban’s interior is cavernous, with dark-tinted rear windows and out-of-sight back corners. President Obama could sit in the second row bucket seats, the pope comfortable in the third row bench behind — and there would still be room for their luggage in the 40 cubic feet of rear cargo space.

The Suburban LTZ I drove is nearly as luxurious as its cousin, the Cadillac Escalade. Heated and air-conditioned leather seats, flip down movie screen, sun roof, 4G LTE Wi-Fi — even cool toys like Apple Car Play. Even before the Secret Service installs bulletproof glass the Suburban is loaded with safety systems like pre-collision automatic braking, blind-spot alert, rear cross-traffic alert, lane-keep assist, 360-degree radar, and anti-aircraft missiles (just kidding about that last one). I managed to park in absurdly tight spaces thanks to the 360-view. Take this bad boy to Rome’s tight streets and it would be still be able to maneuver.

And if you gotta’ run from the bad guys?

Both vehicles are surprisingly nimble for their girth. While the Holy Father might have needed a barf bag if he were aboard, I had a blast flogging the balanced L through Oakland County — only betrayed by a wee 1.4-liter turbo engine that’s not up to the task of the 3,200-pound MPV. The Suburban, meanwhile, is a revelation.

Just shy of three tons, the LTZ is an elephant in ballet slippers. With coil-over springs front and rear and Magnetic Ride Control shocks, it glides along, taking corners with surprising confidence. On dark, slick Pontiac Trail one Saturday night, the Chevy was sure-footed as I chauffeured Mrs. Payne to a wedding reception. Nail the throttle out of a corner with 4WD churning and the 5.3-liter V-8 pulled like a farm ox. Catch me if you can, ISIS.

The Fiat puts the Chevy in its rear view mirror when it comes to fuel economy (duh): 25 mpg to 18. Still, the Suburban has a green safety net: It can run on good ol’ American-made, corn ethanol. When I was a reporter in Washington a couple of presidents ago, I asked if the Secret Service filled the Suburbans’ tanks with ethanol. My inquiry was met with, um, suspicion. Awkward. I swear I was followed for the next month.

Still, the president might insist on it. It would give him a hole card should the pope ever claim that he has the greener ride.

Henry Payne is auto critic for The Detroit News. Email him at hpayne@detroitnews.com. Follow him on Twitter @HenryEPayne. See all his work at HenryPayne.com