The Lola 90 is one of the most popular, durable, affordable sports racers in America today

The 1,100-pound Lola is made of an aluminum monocoque tub and frame holding carbon-fiber bodywork and a 2.0-liter Ford Pinto motor. The combination produces only 150 horsepower but, with a 7:1 power-to-weight ratio, it easily bests a Corvette C7 or Porsche Cayman GTS. Henry Payne/The Detroit News
Fullscreen 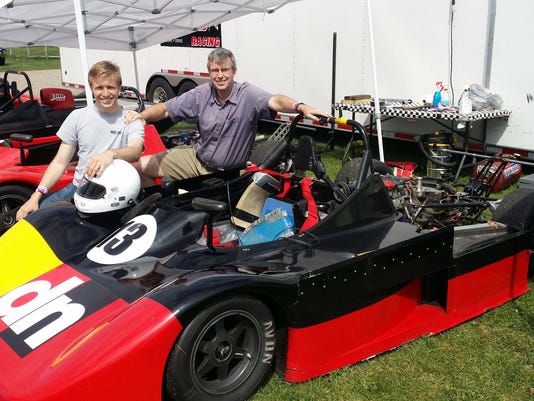 What do you get when you combine a 1973 Ford Pinto motor and a 1,100-pound, 1988 aluminum monocoque chassis? One of the most rewarding racing experiences in America.

When your speed-addled scribe isn’t testing production sedans and sports cars, I get my jollies racing an ‘88 Lola 90. Dream Cruisers strut their stuff on Woodward Avenue’s drag strip - my vintage racer needs a serpentine race track. With my season finale looming at Circuit of the Americas - an epic Formula One track just outside of Austin, Texas - next week, I thought it would be a good time to review this popular, affordable sports racer.

Developed for SCCA (Sports Car Club of America, the U.S.’s largest, most competitive, amateur racing club), S2000 racers like my Lola are essentially formula cars with fenders. Formula Ford (or Formula Renault or Formula Mazda depending on the spec motor used) and S2000 racing have long been both an entree for young drivers with professional ambitions – and an affordable way for motor-heads like me to get our weekend racing fix. As a result, fields feature a wide band of ages. Indeed, racing is a Payne family affair ranging from my two 20-something sons to their 53-year-old father.

After its SCCA heyday in the ’80s and ’90s, S2000 racing has migrated to vintage racing clubs like SVRA (Sportscar Vintage Racing Association) where entries are a healthy 20-40 cars.

I race a handful of tracks a year from Virginia International Raceway to Watkins Glen (New York) to COTA – part of a record list of U.S. venues that we amateurs share with pro racing organizations like NASCAR, Formula One and IndyCar.

My English-bred Lola is one of a number of chassis built for S2000 by manufacturers including Swift, Carbir, March, Royale, Tiga and Van Diemen. All conform to strict rules in order to keep development costs down – including using a largely stock, overhead-cam Pinto motor wedded to a four-speed, Hewland racing gearbox.

With just 150 horsepower, the high-strung, 2.0-liter mill would seem weak milk for the race track. Until you consider it only has to propel an 1,100-pound frame with carbon-fiber bodywork.

That’s a 7:1 power-to-weight ratio that bests a Corvette C7 or Porsche Cayman GTS.

The Lola can reach 150 mph with my tookus riding just two-inches off the ground. But the real revelation of the 90 is its ferocious cornering grip on Avon racing slicks.

This thing is an overgrown go-kart making neck-straining, 2.2 G-loads in the twisties. No wonder the pros spend hours in the gym. After a few laps around Watkins Glen’s mighty sweepers and I’m reclining my head against the small headrest for relief in the straightaways. My kingdom for a neck massage!

Like any sports car, the 90 achieves its nimble handling by managing aerodynamics, weight, and balance.

The car’s skin is flat – Germans call it a “flounder” shape – in order to speed air across the body. No wings are permitted. I bought my steed from Colorado’s Mark Mercer, a three-time SCCA champion, who added “side fences” to increase stability in high-speed turns by preventing air from washing over the sides.

Remove the car’s lightweight skin and the chassis construction is similar to a mid-engine formula car with 50-50 front-to-rear weight distribution. For better center of gravity, shocks and springs are located in the center fuselage just above the pedal box. No frunks here.

Speaking of pedals, I have to trade in my size 15 shoes for narrow, size 11 racing boots just so I can get my flippers down the narrow foot well. Normal-sized humans – like my 6’1” son – sit in body-conforming seats so as not to move with the violent g-loads. But 6’5” freaks like me sit on the floor — stuffed between riveted panels in the spartan cockpit. To prevent side movement, my shoulders are contained by a shoulder brace.

Driving the 90 is a blast, once its idiosyncrasies are learned. Upshifts are lightening quick and clutch-less – since maintaining momentum is paramount with a small-displacement engine. This is no Boss 302 stump puller. Though not as stiff as state-of-the-art, carbon-fiber racing tubs (the skeleton of Indycars and now super-sports cars like Ferraris), the flex-less chassis pushes the envelope of grip – then quickly lets go when the limit is reached.

Besides a Ford engine, there’s one other thing my vintage wheels shares with a Woodward cruiser: An open top. Wearing a full Nomex suit, helmet, balaclava and gloves leaves me a puddle of sweat – so the natural air conditioning is a blessing.

Henry Payne is auto critic for The Detroit News. Email him at hpayne@detroitnews.com. Follow him on Twitter @HenryEPayne. See all his work at HenryPayne.com