Evert and his engineering team benchmarked Civic to the sporty Audi A3. When he needed to get away, he had his bikes. 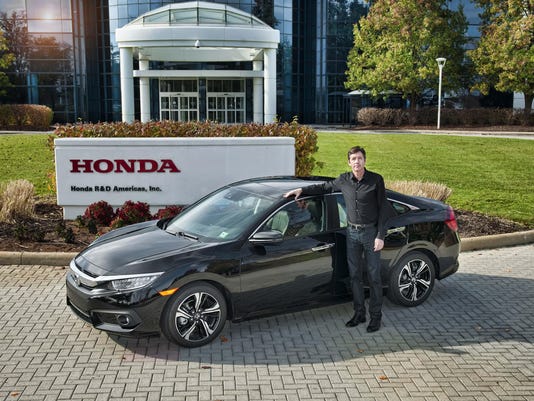 “When I lived in Seattle I was a Category 3 racer,” says Gary Evert, chief engineer of the 2016 Honda Civic and an avid bicyclist who has competed in Tour de France-style American events. “One of my better races was Seattle-to-Portland, a 205-miler that I did in about 10 hours and finished well. That’s the thing about cycling — there is always someone better than you.”

There aren’t many manufacturers who do a better compact car than Honda.

Not only is the 10th generation Civic the best ever, it has set a new class benchmark with class-leading interior room, rear legroom, fuel economy. And it is the first car to offer both Apple Car Play and Android Auto — the much-anticipated apps that allow consumers to double their smart phones as in-car, console infotainment systems. Evert and his Redmond, Ohio team spent long hours benchmarking the Civic to Audi’s nimble A3 in order to re-establish their compact as a sporty badge.

When the 50-year-old University of Washington grad needed to get away, he had his bikes.

“Because I think about cars all the time, my escape is riding road bikes,” he says. “I have a collection of 11 or 12 the last time I counted.” At the Civic’s media test outside Ann Arbor this October I sat down with Evert to talk Civic, CVTs, and cycling.

Q: Who makes the best bike?

Evert: There are a lot of good ones right now. Some of the American bikes like Cannondale, Trek, Specialized.

Q: Ohio is flat as a board. Where’s an avid cyclist go?

Evert: There are a lot of good rural roads in Ohio. Raymond is beautiful — there’s actually a little ski area that makes great climbing right near work. I used to race competitively and am getting back into it.

Q: Is amateur racing as cut-throat as depicted in the classic cycling movie, “Breaking Away”?

Evert: No. I really enjoy being in that atmosphere. Everyone’s out there to enjoy themselves. I have a great group of guys I race with. Level 1 is pro, 2 is Olympic, 3 is top amateur. In the United States Cycling Federation ... we’re similar to Tour de France pro racing where we get into tight packs because the aerodynamics are better. We’re doing a lot of drafting.

Q: The Civic has changed dramatically over 10 generations. What’s different this time?

Evert: One of the strengths of Honda is that for each new Civic we have a new team. For this Civic we wanted to get back to that sporty DNA we’ve been known for. Better dynamics, lower seating position, sporty styling. We completely redid the packaging beginning with the hip point. Then we lowered the engine, the floor, the suspension. Move the rear seat back. Gives it a more athletic stance, but at the same time increases head room.

Q: Has bringing the Honda Fit to market allowed you to grow the Civic?

Q: Was it your goal that the Civic be roomiest in class?

Evert: Absolutely. The Europeans aren’t known for the most efficient packaging and that is something that Honda is known for. We are by far the best in class in interior and trunk volume. And best in class fuel economy and acceleration. We’re 1.5 seconds faster 0-60 than competitors like Corolla.

Evert: We wanted to be sporty and also meet Honda’s philosophy of great fuel economy. So the turbo was out of necessity.

Q: You’re going to sell more variants of Civic than ever?

Evert: We’ve had two different Civics — one for North America, another for Europe. We wanted (the 10th generation) to be sold globally so we developed the coupe and four-door in North America, then a five-door variation in Japan — and sporty derivations like the Si and Type R. There are nine facilities around the world that will be able to make the Civic. Cars sold here will be made in either the U.S. or Canada.

Q: CVT trannies don’t have a sporty reputation. Why is yours so peppy, so smooth compared to competitors?

Henry Payne is The Detroit News auto critic and can be reached at hpayne@detroitnews.com.