The “Mini-Model S” is finally here. After years of anticipation, the mid-market, $35,000, electric Tesla small sedan — what Tesla mad genius Elon Musk calls the “final step in my Master Plan” — finally showed its face to the world Thursday night.

And the world immediately thought: Where’s the face?

Like Hollywood’s sunglasses-shod Invisible Man, the Model 3’s front end is featureless but for its headlights. No nose. No mouth. None of the familiar vents on our gas-powered cars because, of course, battery-powered vehicles don’t need openings to cool the radiator. Yet, even big brother Model S featured a non-functional, plastic grille — complete with Tesla logo — because we humans are comforted by anthropromorphic features on the front of our cars.

The Model 3 is a bold — if somewhat creepy — re-interpretation of front car design. Tesla insists that the prototype Model 3 shown in Los Angeles is production ready – but I would urge Tesla to add some graphics or sculptural elements (check out a McLaren or Acura NSX hybrid, for example) to its mug to compliment the car’s otherwise familiar, sexy Model S-like body lines.

It’s so naked. But hardly unfamiliar. Indeed, the face harkens back to the first mass market EV to hit California in 1996: The equally blank GM EV-1. GM’s own EV efforts are a reminder that the Model 3 is not alone in the “affordable” electric segment. Unlike the sensational, $70k Model S – which outsells traditional, luxury, gas-powered icons like BMW and Mercedes in the gold-plated chariot segment – the Model 3 isn’t the only toy in the $35k EV toy store. 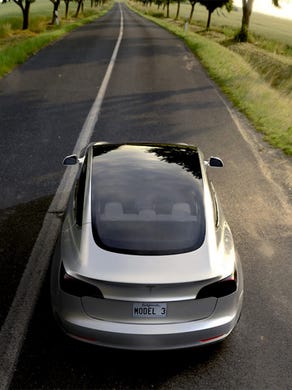 Musk said more than 115,000 buyers put down a $1,000 deposit to reserve a Model 3 sedan without seeing the car or knowing many details. Tesla
Fullscreen 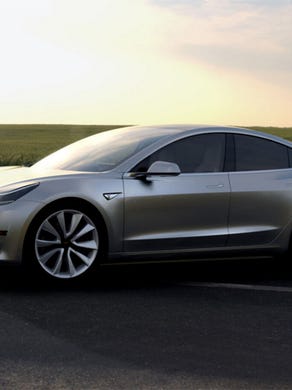 The Model 3 can achieve 0 to 60 mph in less than six seconds, and some versions will be "much faster," Musk said. Tesla
Fullscreen

The company expects the Model 3 to be delivered in late 2017. Tesla
Fullscreen 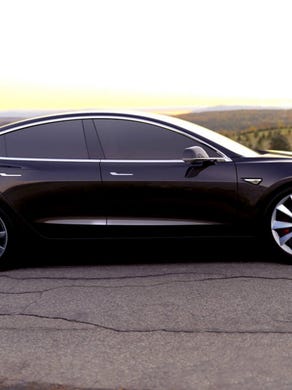 "The revenue from the Model S and the X is what's needed to develop the Model 3," Musk said. "The Model 3, with very high volume and all the engineering needed to achieve the cost reductions and the capabilities, it cost billions of dollars." Tesla
Fullscreen

Both are sleek, roomy, four-door compacts. Both are priced in the mid-30s ($37k Bolt, $35k Model 3). Both boast a range of 200-plus miles on a charge. Both have neck-snapping, 0-60 acceleration (under 7 seconds for Volt, under 6 for Tesla). Both store their batteries in the floor giving them low-center-of-gravity, nimble handling. Both offer “floating,” sci-fi, center consoles with large, iPad-like screen displays (the Model 3’s is landscape-sized as opposed to the Model S’s portrait configuration).

I was not at the Los Angles reveal, but my North American Car of the Year jury colleagues colleagues Aaron Robinson (Car & Driver) and Aaron Gold (AutoExpress.com) were – and their brief, parking-lot, first rides in the Model 3 echoed similar impressions of the Bolt’s debut: Instant torque, surprising head room for compact cars, cool vibe.

There are differences too. The Bolt is more crossover-like with a higher seating position and rear hatchback that will be pleasing to our SUV-obsessed market. The Model 3 makes up for its lack of hatch with a trunk. Learning from the EV-1’s numb design, the Bolt’s stylish, Chevy-like face is more welcoming than the Tesla even as the Model 3’s sleek, simple lines are more aesthetically appealing. After all, the Tesla is designed to compete against other $35k luxury compacts like the BMW 2-series and Audi A3. 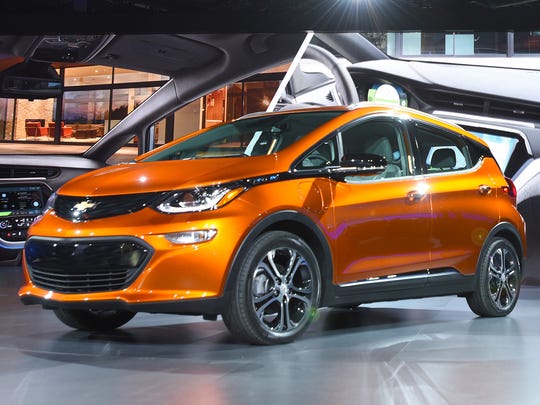 The Chevy Bolt has very similar specs to the Tesla Model 3 but is more crossover-like.  (Photo: Bryan Mitchell, file, Special to The Detroit News)

That may make the Bolt a tougher sell since it is, well, a Chevy. As Gold says: “Comparing Tesla and Chevy is like comparing Apple and Microsoft. Brand matters.”

Luxury buyers are used to paying $35k for compact sedans. But will they pay $35k for a Bolt the size of a $17k Chevy Cruze? Slap a Cadillac badge on the Bolt and it should sell like hot cakes. The Volt-in-a-tuxedo Cadillac ELR shames even Tesla as the best-looking, battery-powered compact made.

But for now the most crucial difference between Bolt and Model 3 may be the delivery date. The Bolt will arrive late this year. GM, after all, has done this before. Startup Tesla? Maybe late 2017. Maybe 2018 given the brand’s history of delays. Maybe longer.

Maybe it will be enough time to grow a face.

Henry Payne is auto critic for The Detroit News. Email him at hpayne@detroitnews.com. Follow him on Twitter @HenryEPayne.