IndyCar racer steps out of the shadow of his famous father

The talented, dashing Graham, 27, is the son of Indy 500 winner and Rahal-Letterman-Lanigan Racing team owner Bobby Rahal. Courtney, 26, is the daughter of the legendary John Force, 16-time NHRA Funny Car champion. America got to see Courtney’s talents outside a driver’s suit when she posed for ESPN’s 2013 Body Issue.

Accustomed to the public eye at an early age, Rahal has stepped out of the shadow of his famous father and established a brand all his own. He is a perennial championship contender in IndyCar, a cheerleader for his wife’s own NHRA title dreams – and a prominent corporate spokesman for his engine sponsor, Honda. That relationship allowed him to follow in the footsteps of another open-wheel superstar, Brazil’s Ayrton Senna, who helped develop the 1990 Acura NSX, the flagship of Honda’s Acura luxury brand.

Ohio-born Rahal helped bring the second-generation NSX to market this year – appropriate since Acura is no longer an exotic import, but made right in Rahal’s Columbus backyard.

The 573-horsepower, 2017 NSX is a mid-engine hybrid-electric cyborg capable of neck-bending performance on the race track, yet comfortable enough to drive home. Credit Graham for some of its bravado.

“It’s the first program I’ve been involved with on the development side,” he said at California’s Thermal Raceway, where he emceed the car’s media introduction. “Early on (they’d ask) my sense of the way things needed to be. I can tell driving today vs. even two months ago they continue to tweak the car and get it better.”

Does it share anything with his race car? “No GT car reminds me of an Indy car,” he said. “But the performance of the car is tremendous for the ($157,000) price point. The torque in this car is instant – the turbo and electric motors complement teach other. That’s what’s cool about it.”

Though a generation apart, we are both sons of racers. I’ve known his dad, now 64, for years on the vintage race circuit where our fathers became fast friends after Bobby’s competitive days were done. 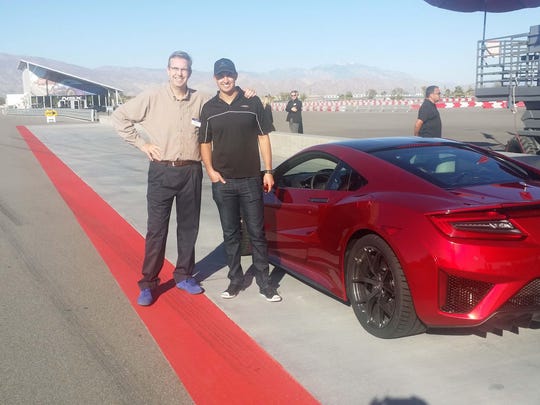 Graham racing success was meteoric. He rose from a 10-year-old go-karter through Formula Atlantic to be the youngest-ever winner of an IndyCar race at age age 19 in 2008.

“I got myself up to the top level fast,” he reflects. “But in hindsight, the experience of taking more time maybe would have been a better thing.”

His father was supportive every step of the way, but when Graham made it to the pro ranks, he wanted to carve his own path. “When I started my career, I drive for Newman-Hass and Ganassi. I did that on purpose to build my own name away from my dad,” he says. “But every time I would go to a sponsor to pitch, the first question was ‘Why don’t you race for your dad?’ It became obvious that using the names together was the most beneficial for us.”

Since uniting under the same flag in 2013, Team Rahal has met with success, finishing fourth in the championship last year. Yet, father and son have never raced together, even in the BMW M6 that Rahal-Letterman-Lanigan entered for this year’s Daytona 24 Hour endurance race – and that Graham co-piloted.

“I tried to get him to race,” says Graham. “But when my dad stepped away, he stepped away. He never did a Michael Jordan. All you do is risk looking worse than you did.”

“My hands are full. I’m always in the drag-racing world with her,” he says of a life split between his home in Indianapolis, her pad in SoCal and the constant race travel. “Between her schedule, my schedule, chasing sponsors – there’s no off time.” 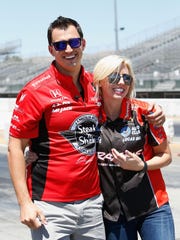 Since his marriage to Courtney in Santa Barbara late last year, Graham has gained a new racing family.

Has he ever been tempted to jump in a dragster and race her down the strip? “Never. And she has never driven an Indy car. It’s a different world.”

Grahamney does share a passion for cars, however. He’s had a variety of steeds including a million-dollar Porsche 918 – and he has an NSX on order. But there is one car that he won’t be selling: a classic 1966 Mustang 289.

“That’s Courtney’s baby. She won’t let me sell it,” he laughs.