Driving the Ford Raptor over the undulating desert at speeds up to 75 mph is not unlike racing a sport boat across Lake Michigan. Henry Payne, The Detroit News
Fullscreen

Buy a 2017 Ford F-150 Raptor sport pickup and you’ll need a bigger sandbox. A good one is California’s 50-mile Anza Borrego Desert State Park course, where you can unleash the full potential of this Brobdingnagian vehicle. Henry Payne, The Detroit News
Fullscreen

Nail the 5,500-pound Raptor’s fat throttle pedal (I wear narrow race shoes for sports cars, but I suggest steel-toed work boots to mash this sucker) and the Ford gulps landscape like an aluminum rhino. Henry Payne, The Detroit News
Fullscreen

Introduced in 2010, the Raptor follows in the (much smaller) footsteps of the VW Golf GTI (the first hot hatch compact) and BMW M3 (the iconic, steroid-fed, luxury sedan). Those pioneers created a cult of production Frankensteins — the Focus RS, Subaru WRX STI, Audi RS4, Cadillac CTS-V and so on. Daily commuters by week, track weapons by weekend. Henry Payne, The Detroit News
Fullscreen

The 2017 Ford Raptor features six drive modes which help the truck adapt to different conditions - not unlike a high-end sports car on a race track. Henry Payne, The Detroit News
Fullscreen

Through the twists and turns of dry canyons - cut by seasonally torrential rains - of the Anza Borrego desert, the Ford Raptor is remarkably nimble at high speeds. Henry Payne, The Detroit News
Fullscreen 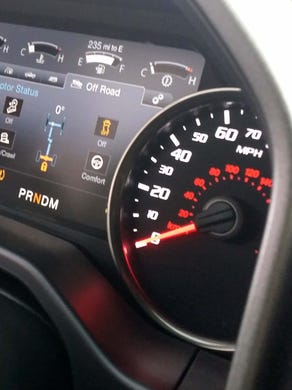 The Ford Raptor's 4WD system distributes torque to where its needed - as shown on the truck's intrument display. Henry Payne, The Detroit News
Fullscreen

A Ford F-150 Raptor in its natural habitat: The wide-open desert of America's southwest. Henry Payne, The Detroit News
Fullscreen

With its tires deflated by up to 20 pounds to better navigate rocky terrain, the Ford Raptor wears beads on the wheels to keep the big-sidewall tires from slipping off the rims. Henry Payne, The Detroit News
Fullscreen

A Ford Raptor sits atop a rocky hill over the Anza Borrego desert after a punishing ride to the top. Henry Payne, The Detroit News
Fullscreen

No matter the violence that the Ford Raptor can inflict on the landscape, the interior is the same plush environs as the standard F-150 - isolating the driver with quiet and comfort. Henry Payne, The Detroit News
Fullscreen

The Ford Raptor gets its own unique lighting signature. Henry Payne, The Detroit News
Fullscreen

The smooth Ford F-150 Raptor is a pleasure to drive on asphalt - as well as off-road. Henry Payne, The Detroit News
Fullscreen

There is no other production truck with the performance capabilities of the Ford Raptor on a high speed off-road course. Henry Payne, The Detroit News
Fullscreen

A key change for the new Raptor was pulling the twin tailpipes up under the rear bumper to keep them out of harm's way in violent maneuvers. Henry Payne, The Detroit News
Fullscreen

The Ford Raptor's bolstered seats fit like a glove - essential for the violent punishment that the truck takes over desert terrain. Henry Payne, The Detroit News
Fullscreen

The 2017 Ford Raptor comes with an array of updates over the gen one truck. Henry Payne, The Detroit News
Fullscreen

Buy a Ford Focus RS, Corvette Grand Sport or Porsche 911 Turbo, and you’ll want to take it to the nearest track playground to explore its capabilities. Probably something like Grattan Raceway’s 2-mile roller coaster, where you can test the limits of the RS’s torque-vectoring all-wheel-drive, or rocket the 911 to more than 130 mph on the long, main straight.

A good one is California’s 50-mile Anza Borrego Desert State Park course, where you can unleash the full potential of this Brobdingnagian vehicle. Nail the 5,500-pound Raptor’s fat throttle pedal (I wear narrow race shoes for sports cars, but I suggest steel-toed work boots to mash this sucker) and the Ford gulps landscape like an aluminum rhino. Rocks are pulverized in its wake, bushes tossed aside, sand dunes obliterated by 35-inch BFGoodrich rubber mallets. Roaring along at 100 mph on sandy flatland, this truck is king of the beasts.

Yes, truck. The Raptor is already a legend in its own time — the first production pickup to offer Baja-like, race-tuned performance. Introduced in 2010, the Raptor follows in the (much smaller) footsteps of the VW Golf GTI (the first hot-hatch compact) and BMW M3 (the iconic, steroid-fed, luxury sedan). Those pioneers created a cult of production Frankensteins — the Focus RS, Subaru WRX STI, Audi RS4, Cadillac CTS-V and so one. Daily commuters by week, track weapons by weekend.

While SUVs have attempted the formula — the 567-horsepower BMW X5 M and Jeep’s nuclear Grand Cherokee SRT8 — none translated the idea to off-road macho. Then along came Raptor.

With a growling, 409-horse, 6.2-liter V-8, steep front approach angle and gym-toned shocks and chassis, the first-gen Raptor wowed. As odd as an empty box seems on the back of any sports vehicle, the testosterone-fueled truck — with its rugged, body-on-frame construction — is a natural tool for off-road runs.

Curiously, other automakers haven’t rushed to follow in Raptor’s wake — though Ram teased a Hellcat concept of its 1500 pickup. The Raptor sells a healthy 15,000-plus units a year while further cementing Ford’s reputation for licking any kid on the block (see Fiesta ST, Mustang GT350, Ford GT).

At first glance I thought Raptor 2.0 was a mild evolution of the original. Wrong.

Sure, signature details are there: Wicked, intake-rippled hood. Blacked-out fascia boldly stamped “FORD” — which translates to “GETOUTTAMYWAY” when read in a rear-view mirror. Swollen fenders over a wider, six-inch track. You’ll know it by the details — twin, three-inch tailpipes snugged under the rear bumper (for better rear attack angle) and menacing, LED headlights that glow red at a full moon.

Like the F-Series, Raptor body panels are all-aluminum (plus exclusive lightweight composite front fenders to resist shrub scratches), which is particularly advantageous to lowering Raptor’s center of gravity. Dig deeper and you’ll find an all-new power-train with a 450-horse, twin-turbo V-6 mated to an industry-first 10-speed tranny. Custom Fox shocks, surrounded by a fortress of suspension upgrades, anchor the four corners. All this is attached to 17-inch forged wheels rolled up in rubber the size of The Rock’s biceps.

Bleed the big gummies to 20 pounds and you can go rock-crawling, thanks to a new, rear e-locker that turns Raptor into a mountain goat. A three-ton, seven-foot-wide mountain goat. Admittedly, not the best application of this truck. Chase a Jeep Wrangler Rubicon (or goat) into a narrow canyon and you might get stuck.

You’ll want the e-locker only to get over whatever mountain lies between you and a high-speed off-road course. Once there, Raptor’s terrain-chewing athleticism is breathtaking.

Like a sort of off-road Porsche Turbo supercar (at a third of the price), the Raptor comes weaponized with six drive modes ranging from NORMAL to MUD/SAND to BAJA/ROCK CRAWL. In BAJA mode with Ford drivetrain engineer Seth Goslowski playing right-seat rally spotter, I assaulted the landscape.

Seth, an amateur racer, compares off-roading to speed-boat racing. Power is gold, brakes irrelevant, chassis stiffness paramount. On the flat stuff I rocketed along between 80-100 mph — the stiffened chassis enabling astonishing speeds for a projectile this size. Then the shocks — with 13-inches of travel — took over in a raging sea of moguls. Call them sand waves.

One moment I was hard in the turbos to power out of a wave trough, the next I was completely airborne over a crest. WHUMP! The beast would hit another trough, sand splashing its bow. Then — WAAUUUUGHH! — back in the throttle over the next mogul at 50 mph.

Try this in anything but a Raptor and your internal organs would turn to jelly. But the F-150’s cockpit is remarkably removed from the violence outside. Quiet. Superb SYNC 3 system — “Seth, tune to Wagner’s ‘Ride of Valkyries’ while I destroy Borrego” — leather-wrapped, orange-trimmed seats so comfortable I might have been racing in my living room Barcalounger.

Moguls turned to ess-curved, dry creek beds carved by seasonal monsoons. Light on the brakes to prevent plowing, I drifted the Raptor across a thorny apex — “Big dip here,” Seth warned — then hard on the throttle under opposite lock on exit. Four wheels churning like giant screws. A sand-cigarette boat.

The 10-speed’s agility also reminded of the Porsche and its effortless, dual-clutch 8-speed. Though not as lightning quick as the German’s box, the 10-speed never interfered in the truck’s high-stress maneuvering, always picking the right gear.

After my 11/2-hour drive, Seth and I simply rolled back on asphalt and headed back to Borrego Springs with the Ford as poised in domesticity as it is voracious in its natural habitat.

The only drawback to owning a Raptor in Michigan is finding a sandbox to play in. Silver Lake State Park below Traverse City is sandy fun, but hardly big enough to hold the beast. Logging trails in the UP are further afield. America’s West is Raptor habitat. California. Texas Raptor Run. Or my personal recommendation: Ford’s Raptor customer academy in Utah (coming in 2017).

Sure, Raptor looks awesome sitting in your company parking spot. But like keeping a 40-foot speedboat in your backyard, this truck won’t be happy unless you turn it loose in the open.