Indianapolis — As governments from Britain to California force the auto market to electrification, Volkswagen and other manufacturers are looking to auto racing to market electric vehicles to a reluctant U.S. public.

Formula E, which features open-wheel cars powered by batteries, held its first race in New York City this July. It will be followed by an all-electric 2018-2019 Global Rallycross series (“e-GRC” for short) — a full-season of production-based EV racing similar to the popular, rowdy Red Bull Global RallyCross.

“We are betting the farm on electric,” says Greg Lucia, Director of Experiential Marketing at VW America. “We are making things differently now. Electric suits our product. And e-GRC is a great way to showcase it.”

For VW, a move to electrification is an opportunity to reinvent itself to a new generation of buyers — and race fans — after the disastrous Dieselgate cheating scandal mired the German company in months of negative publicity.

Manufacturers like VW hope to avoid the mistakes of the last 20 years when they bet the farm on diesel as the politically preferred fuel of the future — only to see governments reverse course.

Michael Andretti, son of the legendary Mario and an IndyCar champion himself, is now CEO of Andretti Autosport, one of the world’s premier racing teams with front-running cars in IndyCar and Global Rallycross. In the midst of this high-powered, gas-fueled racing success, however, Andretti sees the writing on the wall for the internal combustion engine.

“France is banning the combustion engine by 2040, Germany is talking about 2030, and Norway has already announced 2025. It’s not just racing — you won’t be able to sell a car unless its electric, hydrogen or some other alternative to fossil fuel,” he said here in his Indy headquarters. “It’s coming whether you like it or not.”

To that end Andretti is shifting his business toward battery-juiced series like e-GRC and Formula E. “This is the future of racing,” he told Bloomberg in New York.

Other manufacturers like Honda are taking a look at e-GRC for 2018 and most European luxury players are lining up for Formula E. In a major development this week Porsche announced it is leaving LeMans endurance racing to concentrate on the electric series.

Volkswagen is looking at its e-Golf vehicle in a new U.S. racing series for electric vehicles. Customers will see it perform and then be moved to “purchase that product based on that technology,” said VW exec Greg Lucia. (Photo: James Halfacre / Volkswagen)

“Formula E is turning a corner,” said Andretti. “The manufacturers are getting involved. There is really a ton of interest. BMW is getting involved in a bigger way — Mercedes, Jaguar, and Audi has announced it’s taken over a team.”

The EV racing push is similar to automaker efforts to promote the last major government-approved technology to phase out the gasoline engine: diesel.

European governments taxed diesel less to encourage its sale and the policy — along with the engineering breakthrough of turbocharged, “clean diesel” powerplants — met with rapid success as diesel went from just 10 percent of European sales in the ’90s to a majority of 55 percent in 2012. Despite international pressure, the U.S. was an outlier in transitioning to diesel — refusing to give it tax favor. Touting diesel as the future of racing, turbo-diesel Audi and Peugot race cars dominated the 24 Hour of LeMans from 2006-14 as well as U.S. endurance racing.

“Zero-emission battery vehicles will draw on grid power that will decarbonize over time,” says Voelcker, pointing to plans in Europe to convert utilities to wind and solar power. France’s gas engine ban depends on EVs charging off carbon-free nuclear power.

KBB’s Brauer however, questions the continued determination by governments to dictate technological change.

“It is possible that governments might not want EVs in 20 years either because of all the side effects,” he says listing the uncertainties of grid power sources, the environmental impact of mining lithium for batteries and the recycling of used batteries. He says the lack of EV charging infrastructure also lags diesel’s initial promise — though Voelcker believes customers will mostly recharge at home. 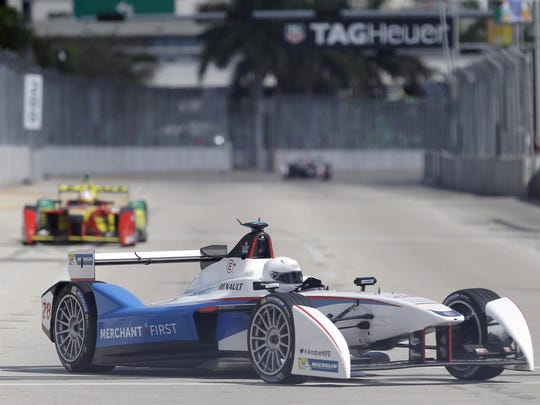 Andretti Autosport CEO Michael Andretti sees electric racing series such as Formula E, which features open-wheel cars powered by batteries, as “the future of racing. There is really a ton of interest.” (Photo: Alan Diaz / AP)

Whatever Europe’s EV plans, Michael Andretti says that, like diesel, he expects “Americans will be the last on board.”

Industry insiders say they have no knowledge of similar U.S. or California mandates to phase out the gas engine. Green Car’s Voelcker, however, says California has concluded that its mandates forcing manufacturers to sell a growing percentage of zero-emission vehicles (EV or hydrogen) by 2025 puts the state on a path to be virtually gas-free in 20 years.

VW’s Lucia is confident that U.S. consumers will adopt EVs — regulations or not.

“The future of our business is not in oil and filter changes. It’s going to be in computer upgrades. What Tesla is doing now, VW will dwarf by 2025,” he says. “As charging becomes more efficient and as more stations become available, consumers understand access will be solved by 2025. It’s accessibility that the market will drive.”

Racing is expected to play a key role as well.

“Our e-Golf will be a great platform for racing,” says Lucia. “Customers will identify it as an e-GRC vehicle. They will be be able to see the e-Golf outperforming other vehicles on the track, and (then) actually purchase that product based on that technology.”