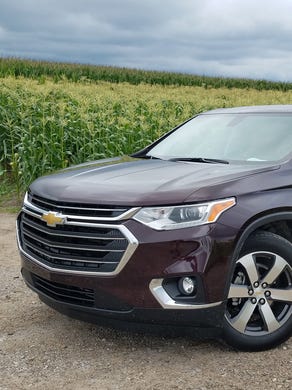 A $46,00, Chevy Traverse LT comes with a nicely-sculpted body and big, handsome wheels. On a trip through Michigan's Leelanau County west of Traverse City, its V-6 engine got 23 mpg from the 310-horsepower engine. Henry Payne, The Detroit News
Fullscreen

The Chevy Traverse shares a platform with the GMC Acadia midsize SUV, right, but packs a longer wheelbase and more interior room for families. Henry Payne, The Detroit News
Fullscreen

The Chevy Traverse does not come standard with safety assist systems like blind-spot warning and pedestrian detection — but it does have a 360-degree camera option. Henry Payne, The Detroit News
Fullscreen

With trailering capacity of 5,000 pounds, the 2018 Chevy Traverse can comfortably carry six passengers as well as a boat to Lake Michigan. Henry Payne, The Detroit News
Fullscreen

The five-door hatch SUV is America's family vehicle of choice. Even with all three rows in place, there is room in back for luggage for a weekend trip up north to Traverse City. Henry Payne, The Detroit News
Fullscreen

The Chevy Traverse offers a handsome, digital instrument display with multiple pages. On a journey through Traverse City highways and back roads, the midsize SUV got 23.6 mpg thanks largely to a new, nine-speed transmission that improves fuel economy over the previous generation vehicle. Henry Payne, The Detroit News
Fullscreen 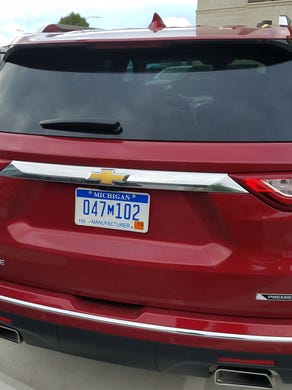 The rear of the new, 2018 Chevy Traverse eschews the dramatic "boat-bow" window of the previous generation Traverse for a more conventional, squared-off look. Henry Payne, The Detroit News
Fullscreen

Land yacht. The Chevy Traverse comes in a variety of trims, from RS to LT and Premier. For 2018 Chevy has added a "High Country" trim that includes an exclusive, twin-pack clutch AWD system and a suite of standard safety assist systems, including Lane Departure Warning. Henry Payne, The Detroit News
Fullscreen 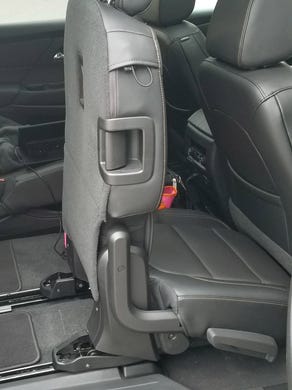 The Traverse LT displays the huge greenhouse that makes it the roomiest SUV in class. Henry Payne, The Detroit News
Fullscreen

The 2018 Traverse is less thirsty than the previous-gen, and offers up to a 21.7-gallon gas tank on its AWD drive model, making trips to the gas station less frequent. Henry Payne, The Detroit News
Fullscreen 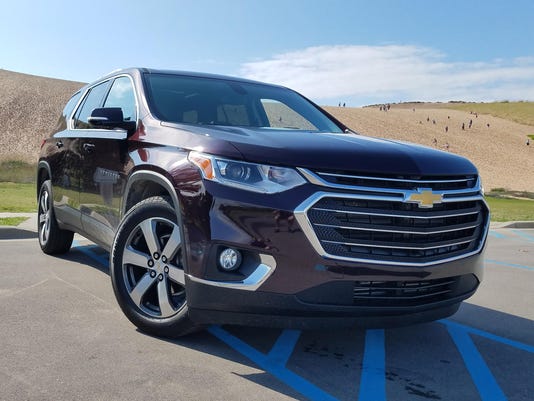 The exterior of Chevrolet’s latest Traverse is no standout, but the seven-passenger SUV offers comfort and predictability.(Photo: Photo by Henry Payne/The Detroit News)Buy Photo

Sleeping Bear Dunes west of Traverse City is Michigan’s Grand Canyon, a supersized natural wonder that attracts families from all over to witness its grandeur. From the summit, you can barely see the people contemplating the daunting 450-foot climb back to the top after an effortless run down to the Lake Michigan shoreline. “Enjoy the view from here,” reads the state park sign, “Don’t risk the 2 HOURS it may take to get back up.”

From the summit you can also contemplate the state of America’s auto market.

The Dunes parking lot is stuffed with five-door SUVs of all sizes, the rows of hatchbacks interrupted by the odd sedan, pickup or pony car. Pickups and SUVs today comprise 60 percent of new-vehicle purchases, but I count 80 percent utes up here in nature’s Disneyland.

Mid-size chariots are the family ute of choice, offering the essentials American owners crave: high seating position, three rows for families of four or more, peppy engines and interior versatility for long drives to nature’s remote grandeur. Every mainstream manufacturer is in this hot segment, determined to establish themselves as the family brand. But how to tell them apart when everything is a five-door box?

Ford’s Explorer looks like a stylish Land Rover with its flying buttress C-pillar and toothy grille. The Toyota Highlander features a bold grille and graceful, blacked-out windows. Honda’s Pilot looks like an oversized Accord. The Jeep Grand Cherokee looks like a Jeep.

But my all-new 2018 Chevy Traverse tester is a wallflower, its conservative styling undistinctive.

That’s a change from the last-generation Traverse, and there were plenty of examples surrounding me as we traversed Traverse City. The old Traverse took its cures from Impalas and Camaros with a wrap-around grille and unique “boat bow” rear window shared with the lovely Buick Enclave (which shares the Traverse’s platform).

The new Traverse is squared-off in back, its front end adopting Chevy’s confused split-grille design. It’s an oversized Equinox, which is Chevy’s staid, compact ute entry.

But where the Traverse is content with vanilla packaging, it is a rich serving of Michigan Moose Tracks Caramel Chocolate Chunk under the skin. Chevy knows how to supersize interiors and the Traverse is state of the art.

With two inches of wheelbase over its predecessor — most of it going to legroom — the Traverse is the largest vehicle in class, beating the Explorer, Highlander and Jeep (heck, the Grand Cherokee doesn’t even offer a third row). At 6-foot-5, your oversized auto reviewer was comfortable in every row of the Chevy including the third where I had more knee room than Delta coach class. Just as important, Chevy makes it easy to get back there.

One pull of the side-seat handle and the second-row captain’s chair in my meat-of-the-market, $46,580 LT grade tumbled forward. (Though with still enough room so you don’t have to extract a kid’s car seat first. Clever.) The action is nearly as easy as Honda Pilot’s one-button solution — though Chevy only offers its feature on the right-side seat, whether to encourage curb-side entry or to save money.

Once back there, I had light (thanks to a full moonroof, highly recommended), legroom, USB port for my smartphone, and a cup and fry holder for my fast food. Mom, text me when we’re there.

Needless to say, the middle and front rows are even roomier, with the front center console rivaling a pickup truck in its versatility with storage and cup holders galore. My favorite console is the Pilot’s clever purse-swallowing space, but the Traverse is worthy of comparison while offering a more intuitive shifter compared to the Pilot’s less-intuitive push-button system.

GM has been a pioneer in connectivity and Mrs. Payne and I found our way across Northern Michigan’s vast spaces with ease using Apple CarPlay navigation and WiFi connectivity while working on our laptops.

With such attention to detail, however, the Traverse’s shortcomings stand out especially at the volume-selling LT’s hefty sticker. For the same price, you can get a Toyota Highlander Hybrid with 40 percent better fuel economy. More glaring, the Toyota (like the Pilot) comes standard with safety systems like adaptive cruise control, pedestrian detection, automatic high beams and lane-departure alert. Not the Traverse LT. Heck, a Mazda CX-5 offers these gadgets for $10,000 less.

“It’s a very strange decision not to include these features,” Auto Pacific analyst Dave Sullivan says. “Offering a family vehicle in 2018 without that equipment is a miss.”

Where Chevy focuses its tech is in chassis and drivetrain.

The Traverse has managed to slim down even as it got bigger. On GM’s new CY1 platform — shared with the GMC Acadia and Cadillac XT5 — the big Traverse has lost 360 pounds.

Hitch this beast to Chevy’s reliable 310-horse V-6 and first-in-a-large-ute 9-speed transmission, and the Traverse is genuinely fun to drive. With its torque-vectoring all-wheel drive rotating out of Sleeping Bear twisties, the transmission smoothly downshifted to find the right gear ratio and maintain the 4,500-pounder’s momentum.

Together, the frame and transmission increase the SUV’s fuel economy by 5 miles per gallon. That expands the Traverse’s range to 470 miles on a tank of gas, which is welcome security when karting the family over Michigan’s gas-station-sparse farm country.

I noted recently that the Camaro’s 8-speed is smoother than the Lexus 10-speed, and the Traverse’s 9-speed is another blue ribbon for GM’s trophy case. The smoothness is marred only by a stop-start at idle function which drivers don’t have the option to switch off.

Will stop-start be the 21st-century equivalent of the 1970s automatic seat belt? The latter was automakers’ response to federal seat belt mandates, and stop-start similarly gains manufacturers’ favor with the EPA’s mpg nannies.

Lost in the regulatory thicket is the customer who thinks their car is stalling whenever it reaches a stoplight. It drives my wife crazy even though Chevy’s solution is smoother than your average Land Rover. Chevy will no doubt get an earful from customers.

The Traverse was a welcome traveling companion, offering smoothness, comfort and predictability. Chevy offers a smartphone app so you can warm it up on your way to the parking lot.

Now if they would only make it more distinctive so that I can find the bloody thing in a sea of utes.