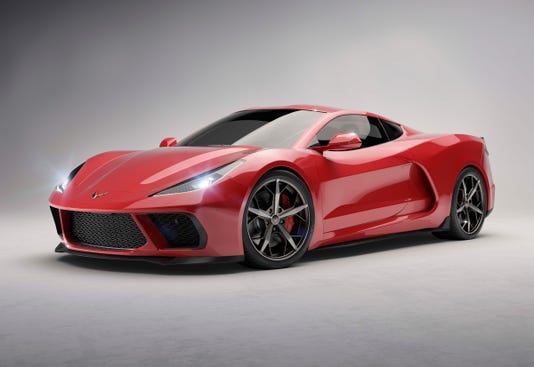 A Car and Driver rendering of the 2020 Corvette C8 - the first mid-engine version of the storied Chevy sports car.(Photo: Car and Driver)

Whale-trackers were sure it would breach the surface at this year’s Detroit auto show where previous Corvettes have debuted.

But they will have to wait a little longer. A Chevy spokesman confirmed the brand will not be revealing any new vehicles at the January show. The current-generation Corvette C7 was introduced at the Detroit show in 2013, with the C7.R race car breaking cover a year later.

The new Corvette is not expected to be seen until sometime in the spring.

Though hope of a Detroit sighting dimmed months ago, speculation stirred again last week with the posting of an internet video showing a race mule — barely disguised in zebra camouflage — night-testing at Sebring Raceway in Florida.

With the 24 Hours of Daytona kicking off the IMSA WeatherTech Sportscar Challenge season at the end of January, don't expect to see the new Corvette there.  A spokesman for Wixom race shop Pratt & Miller, which prepares Chevy’s Corvette racers, confirmed it will enter the same current-generation C7.R race car in this year's Daytona endurance race.

International GT racing homologation rules require that 100 production cars be built in order to enter a race car. While the rules have been bent in the past for low-production models (the Ford GT, for example), the mass-produced Chevy traditionally has conformed to the standards: race car follows production car.

“I don’t think we’ll see (the race car) this year due to the timing of the homologation rules,” says Ford Performance Engineer Mark Rushbrook, whose race arm fields one of Corvette’s chief competitors, the mid-engine Ford GT. “But we know they are working on it and we are looking forward to seeing them on track."

The News reported in August 2016 that Chevy was developing the eighth-generation Corvette as a mid-engine car.

In addition to spy shots of the mid-engine car testing in Milford, the project was consistent with GM's investment of nearly $800 million in upgrades to its Bowling Green facility where Corvettes are built. Production is expected to begin there in fall 2019.

The iconic Chevy – dubbed America’s “affordable supercar” for performance rivaling $200,000 Porsches and Ferraris at half the price – has traditionally been a front-engine car. In order to make the next performance leap, however, program managers determined a mid-engine layout was necessary.

Mid-engine cars have better balance and handling than their front-bay cousins. That handling is not only important on road, but is key to keeping Corvette competitive at the summit of international motorsport where it faces stiff competition from mid-engine Ford GT and Ferrari 488 supercars. Even Porsche's 911, Stuttgart’s rear-engine racing icon, has moved it engine amidships to keep pace.

A mid-engine layout also opens options for Chevy to take advantage of new technology like locating an electric motor up front for all-wheel drive.

Bob Lutz, GM’s former product chief — who received approval for a mid-engine Corvette in 2007 before it was sidelined by the Great Recession — speculated to The News in 2016 that the C8’s long lead time foreshadowed “electric motors at the front (that) would enable limited AWD capability.”

Car and Driver magazine has reported that a hybrid, twin-turbo V-8 version of the Corvette C8 is planned that could generate 1,000 horsepower with all-wheel drive.

The drivetrain changes are reported to include — in addition to a reliable, entry-level pushrod V-8 – a high-revving, Ferrari-like, flat-plane crankshaft V-8. The higher pitch of the camouflaged Corvette lighting up the Sebring night seems consistent with this option.

The mid-engine car’s absence from this January's show has led to speculation that the project base been delayed.

Hagerty magazine's Don Sherman, a veteran tracker of the mid-engine car’s development, said, “There may have been some issue that had to be resolved.”

Like finding Moby Dick, it’s hard to know all the details. Bringing an all-new sports car to market together with new engines and global race programs requires a lot of coordination.

The white whale is getting closer.