Toyota's legendary Supra is back and it was worth the wait. The sexy sports car is more fun and more affordable than ever.

The 2020 Toyota Supra is a blast to drive fast. The neutral handling means the car changes directions quickly — and can be drifted at will. Photo courtesy Toyota
Fullscreen 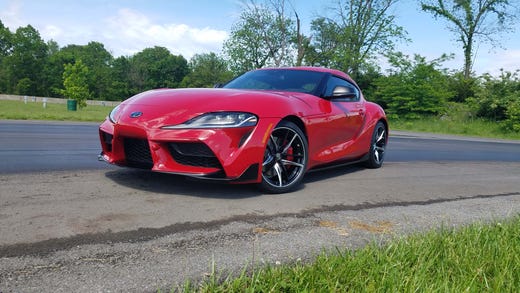 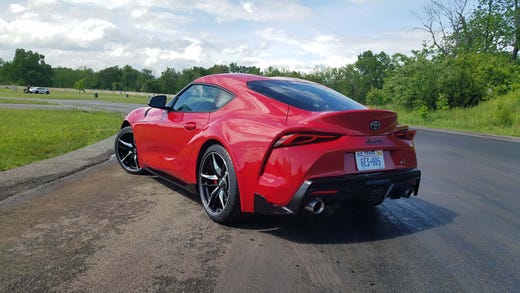 Big hips. The 2020 Toyota Supra shows off its muscular rear hindquarters. With sticky, 10.8-inch rear tires the car has plenty of grip around corners. Henry Payne, The Detroit News
Fullscreen 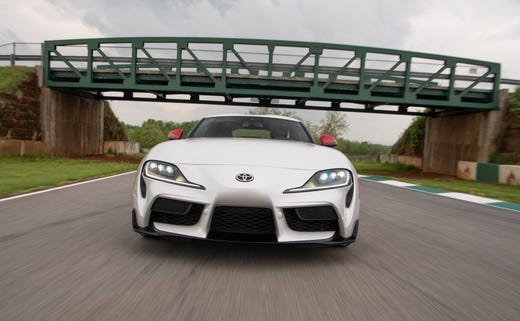 The 2020 Toyota Supra's natural habitat is a racetrack — and it bears a Formula racing car-like nose to prove it. Photo courtesy Toyota
Fullscreen 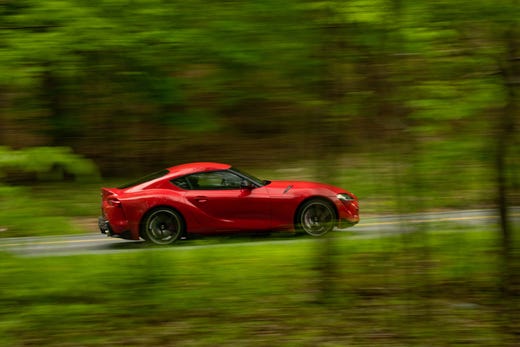 With its hatchback storage, comfy seats and dynamic performance, the 2020 Toyota Supra makes a great getaway car for a weekend trip to twisty roads. Henry Payne, The Detroit News
Fullscreen 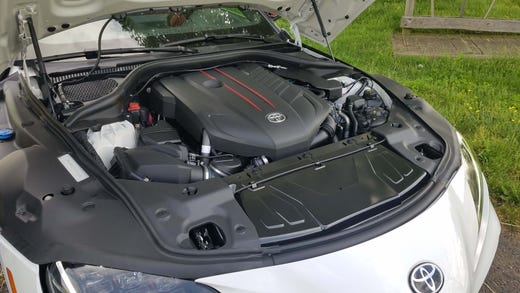 The meat of the matter. The 2020 Toyota Supra shares a 3.0-liter inline, turbo-6 cylinder with the BMW Z4. The Toyota unit puts out 335 horsepower with 365 pound-feet of torque available at just 1600 RPM. Henry Payne, The Detroit News
Fullscreen 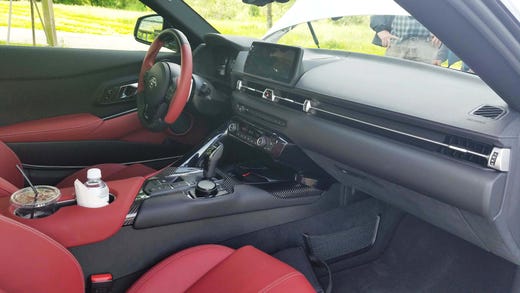 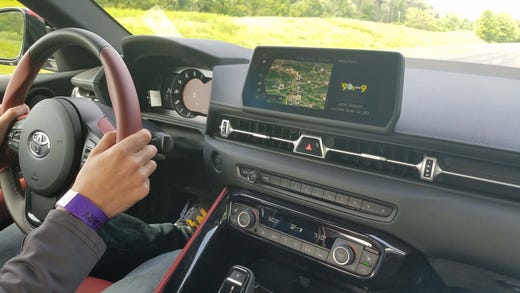 The 2020 Toyota Supra gets a touch screen that can also be remotely controlled with a rotary dial. The tach is digital and the horizontal dash complete with useful climate buttons. Henry Payne, The Detroit News
Fullscreen 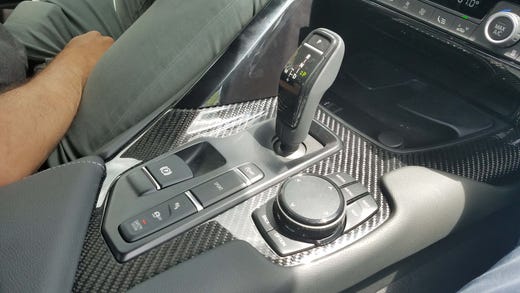 Thanks, Bimmer. The 2020 Toyota Supra shares parts with the BMW Z4, including a monostable shifter and remote rotary dial for the infotainment screen. Henry Payne, The Detroit News
Fullscreen 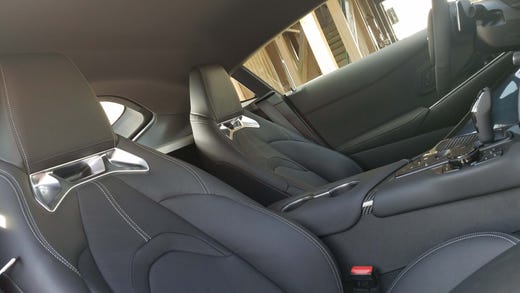 The 2020 Toyota Supra features comfortable, bolstered seats that can be adjusted for each passenger. Henry Payne, The Detroit News
Fullscreen

Concept become reality. Toyota introduced the FT-1 design concept at the 2014 Detroit auto show. The car would inspire the 2020 Toyota Supra that goes on sale in July 2019. David Coates, The Detroit News
Fullscreen 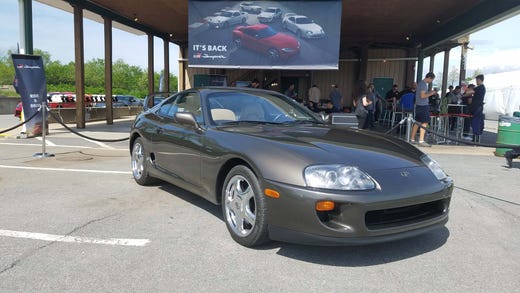 The last Toyota Supra was the so-called A80 chassis shown here. Debuted in 1993, it produced an impressive 320 horsepower with an inline-6 engine. Its production run lasted just five years. Henry Payne, The Detroit News
Fullscreen 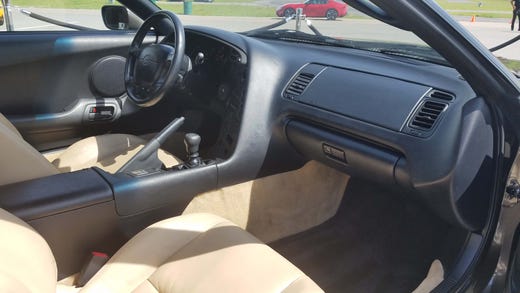 The interior of the 1993 Toyota Supra looks pedestrain by today's standards. The modern Supra has tech galore like Apple Carplay, a remote infotainment dial, blindsport assist and a digital cockpit. Henry Payne, The Detroit News
Fullscreen

The 2020 Toyota Supra has a good presence in the rear-view mirror with its F1 nose, big air scoops and horizontal LED light signature. Henry Payne, The Detroit News
Fullscreen 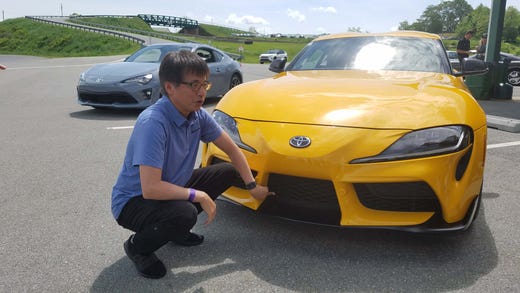 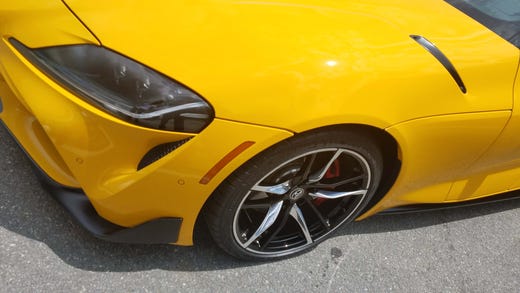 Those engine vents on the 2020 Toyota Supra are fake. But Toyota says they can be opened up for tuners who want to add more downforce/air to their track cars. Henry Payne, The Detroit News
Fullscreen 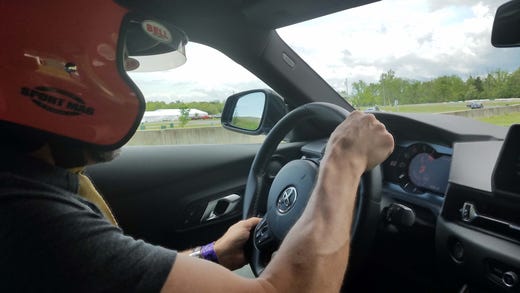 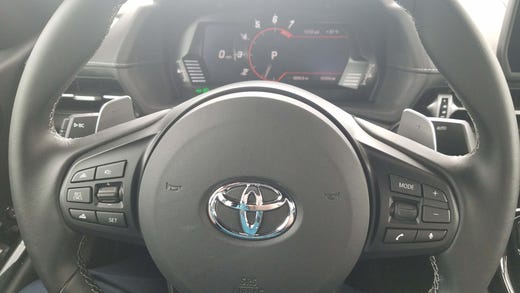 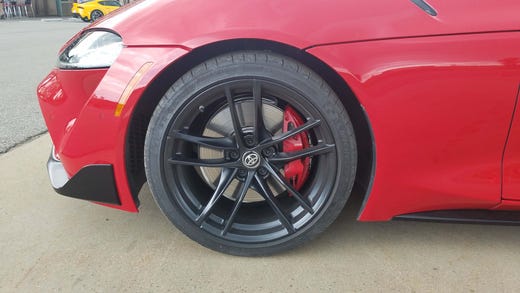 The 2020 Toyota Supra comes with healthy, 13.7-inch, 4-pot Brembo brakes. Get the Premium trim and the calipers are colored red. Henry Payne, The Detroit News
Fullscreen 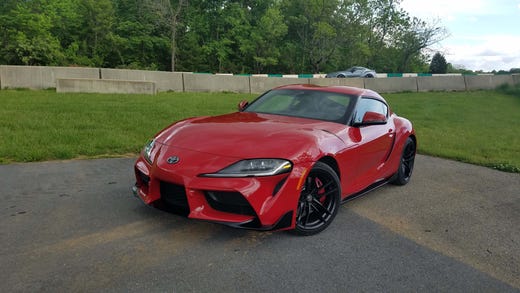 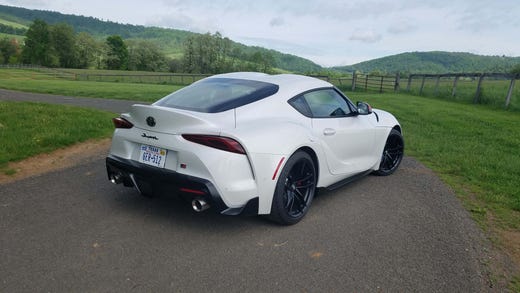 A 2020 Toyota Supra Launch Edition starts at about $56K. It's a hoot to drive on country roads with its quick steering and powerful, torquey engine. Henry Payne, The Detroit News
Fullscreen 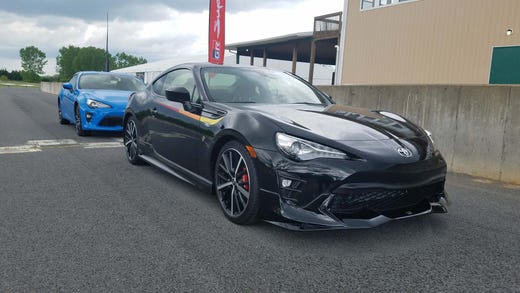 $50K 2020 Toyota Supra too expensive? The Toyota 86 is a barrel of run for just $27K with a taught chassis and dynamic styling. Henry Payne, The Detroit News
Fullscreen

The 2020 Toyota Supra may never have happened without Hollywood.

Three years after the last-generation Supra had been discontinued, the 2001 action film “The Fast and the Furious” cast the car as Paul Walker’s tire-burning co-star. The Japanese sports car became a mega-hit, more coveted in retirement than when new.

“Supra, Supra, Supra. It’s all we heard from dealers and fans, especially on social media,” says 2020 Supra chief engineer Tetsuya Tada. So in 2014 Toyota rolled out a jaw-dropping concept car at the Detroit auto show called the FT-1. Everyone knew it was a Supra tease. Social media went loco.

Five years later the new-generation Supra is finally here. It was worth the wait.

The 2020 Toyota Supra is a blast to drive fast. The neutral handling means the car changes directions quickly - and can be drifted at will. (Photo: Toyota, Toyota)

The sexy Supra has its father’s silver screen appeal. It’s a rockin’, sockin’ looker complete with its own glorious turbocharged six-cylinder soundtrack.

At full tilt on the back roads of Virginia and Summit Point Motorsports Park, Supra is addictive. Its quick, tail-happy handling has been tuned with the next “Fast and the Furious” sequel in mind. Its tail-kicking 365 pound-feet of torque comes on like a light switch at just 1,600 rpms. And its adjustable, bolstered seats will keep you comfy for hours of backroads fun.

But the new Supra has also learned from papa’s high-living ways with a smaller price tag and smaller, more-athletic chassis that should make it more accessible to more drivers. Call it fast, furious and ‘fordable.

From the green flag, Supra’s development team made no bones about its target: the Porsche Cayman/Boxster, the best-handling sports car on the planet for under $100,000.

Tag-teaming with the BMW Z4 Roadster — with which Supra shares its chassis and drivetrain — the pair double-team the Stuttgart star. The Bimmer takes on the drop-top Boxster, the Supra takes on the Cayman coupe.

High-five Toyota CEO Akio Toyoda. Overnight, we sports-car junkies have seen our choices double. And at a more affordable price. When the Supra bowed out in '98, it carried a Cayman-like price tag (adjusted for inflation). While the comparable, inline-6 powered BMW will be priced closer to the Boxster at $63,000, the Supra will cost 10 grand below Cayman (with an even cheaper turbo-4 version possible, too) with more standard features and two more cylinders.

Those two pistons are crucial.

Big hips: The 2020 Toyota Supra shows off its muscular rear hindquarters. With sticky, 10.8-inch rear tires the car has plenty of grip around corners. (Photo: Henry Payne, The Detroit News)

The Cayman once boasted one of the best soundtracks in the sports car genre. Its normally-aspirated, flat-6 mill was heaven at high revs. But Porsche has succumbed to Europe’s green nannies and stuffed the current, so-called 718 generation Cayman with a flat turbo-4. It hits all the performance targets but sounds like, well, an angry VW bug. Fast and ... not so furious.

Enter the Supra and its BMW-sourced inline-6.

It's muffled a bit by its (torque-tastic) turbo, yes, but Toyota has tuned it to the nines with an aggressive note on start-up, piped in cabin sound, and — BRAAAP! — a gargling, farting backfire when you let off the gas.

So how does the Supra measure up to the Cayman on track?

They are surprisingly different, even though the Supra was baselined to the Cayman S and boasts a lower center-of-gravity. It's even lower than its cheaper sibling, the Toyota 86 with a boxer-4 engine, heretofore autodom’s low-CG standard.

The Cayman feels like it's on rails around fast turns. Its mid-engine chassis is resistant to the driver’s efforts to hang the tail out. Its dual-clutch transmission is ultra precise, with rapid-fire up/down shifts. Porsche carves apexes like a scalpel.

The Supra, on the other hand, encourages drifting. Tada-san and team tuned the chassis with amateur racers in mind. Miss your turn-in? The Supra’s neutral handling responds aggressively to steering input to rotate the car quickly. The result is a car that — with huge, sticky 10-inch front and 11-inch rear Michelin Supersports — is a joy to drive sideways.

It’s not the fastest way around the track — but it will put a grin on your face. I had to discipline myself around Summit’s tight, Shenandoah Race Track not to hang it out everywhere.

Physics also plays a role. At nearly 3,400 pounds the Toyota is closer to a V-6 Camaro than the 2,888-pound Cayman. As a result, the Supra has more mass to control through corners and is jouncier over severe road undulations. Indeed, the Supra’s speed (117 mph at the end of Summit’s back straight compared to 98 for the Toyota 86) and whippy handling mean some drivers will prefer Toyota’s tidier, 201-horse brother.

Give the handling medal to Porsche — but give the passion prize to Supra.

That passion is underlined by the inline-6. The single-clutch eight-speed transmission doesn't match Cayman’s sophisticated dual-clutch tranny, but it’s so good you won’t miss the lack of manual option. It keeps you in the meat of the 6’s torrid torque band all the time.

The emotion continues in the styling, which shames Paul Walker’s ol’ high-wing Supra.

I swooned over the FT-1’s nose, which appeared to have been taken right off a Ferrari F1 car. The snout has been modified a bit to accommodate engine air-intake needs, but the finished product is uniquely Toyota and very racy (see if you can tell where the bumper structure runs).

That aggressive look continues across the twin-bubble roof, rocker panels and muscular rear shoulders — my favorite view of the car. It’s a panther ready to pounce. And that big hatchback easily swallowed my luggage, plus a golf bag if that’s your game.

Inside, BMW prevails — which ain't a bad thing. The remote rotary infotainment dial is very good, as is Bimmer's monostable shifter. Toyota's own digital display is properly racy.

Typical of Japanese exterior design these days, the Supra is bristling with fake air ports. But Toyota says they are properly located should tuners want to modify them to get more downforce/engine capability from the car.

Racing, by the way, is integral to Supra. Its “GR” trunk badge references Toyota’s Gazoo Racing team, with plans to enter the car in GT series across the globe. But with its combination of long torque band and short wheelbase, Michigan enthusiasts will find they can push the envelope of the production car on rural roads as well as on track.

Toyota now joins Chevy with a pair of accessible sports cars ranging from the $27,000 86 to the rockin’ Supra.

I wouldn’t be surprised to see them in "The Fast and the Furious 9."

Lows: Porky; tight fit for a big dude with helmet