Payne: Tesla road trips and the challenge of EV ownership

Payne: Tesla road trips and the challenge of EV ownership 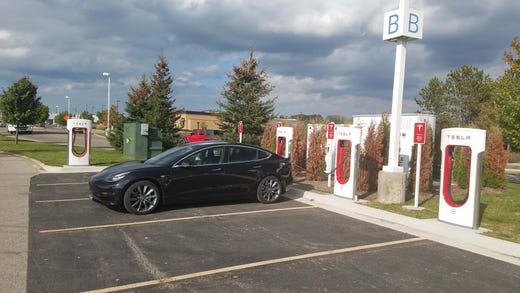 Detroit News auto critic Henry Payne made a long stop at the Gaylord supercharger on the way to Charlevoix in his Tesla Model 3. Henry Payne, The Detroit News
Fullscreen 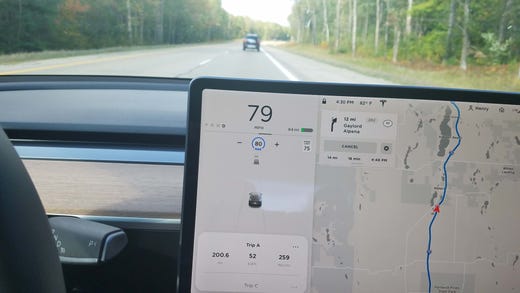 The Tesla is sensitive to speed. Range will degrade by some 20 percent when driven over 70 mph - an issue in north Michigan where the speed limit is 75 mph. Henry Payne, The Detroit News
Fullscreen 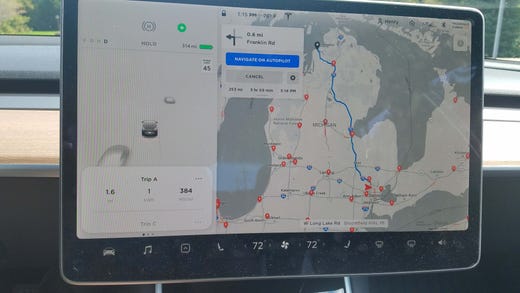 To get to Charlevoix, Michigan, you'll have to charge at the state's furthest north charger in Gaylord. Henry Payne, The Detroit News
Fullscreen 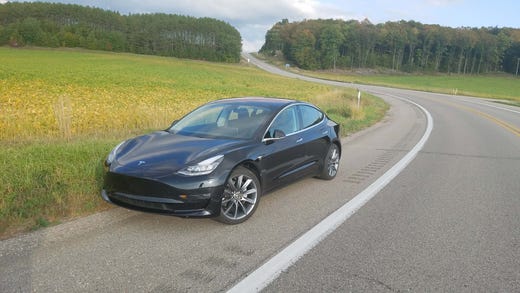 Long trips are fun in the Tesla Model 3 with toys like Naviagate on Autopilot where the car will drive itself to the destination (on divided highways only). Henry Payne, The Detroit News
Fullscreen 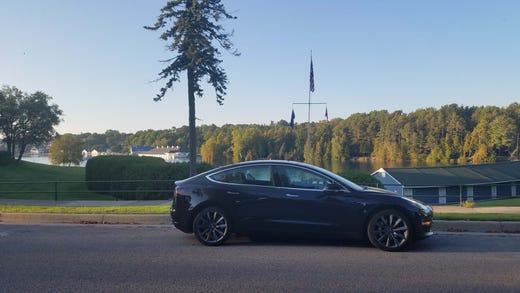 The bucolic town of Charlevoix has no public charging. Meaning that, factoring in the 80 mile round-trip to the nearest Tesla Supercharger in Gaylord, you have about 200 miles of range to negotiate the Michigan coast. Henry Payne, The Detroit News
Fullscreen 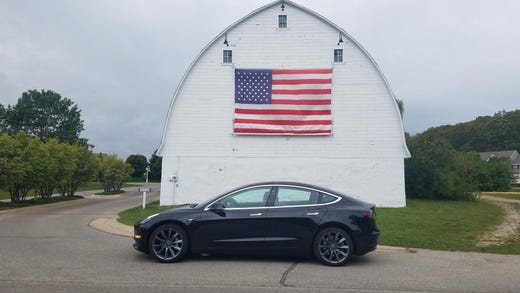 The Tesla Model 3 is Made in America - but not in Detroit. Henry Payne, The Detroit News
Fullscreen 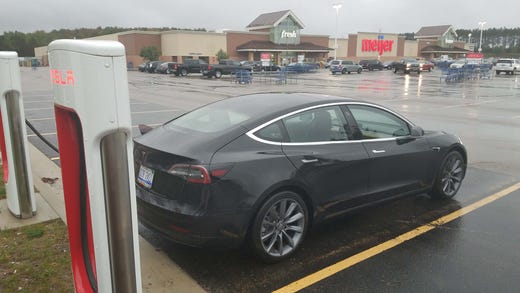 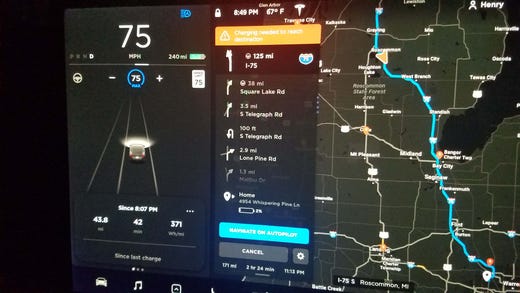 With the Tesla Model 3's range degrading rapidly in pouring rain, the car tells Payne he has to find a charger if he is to make it home. Henry Payne, The Detroit News
Fullscreen 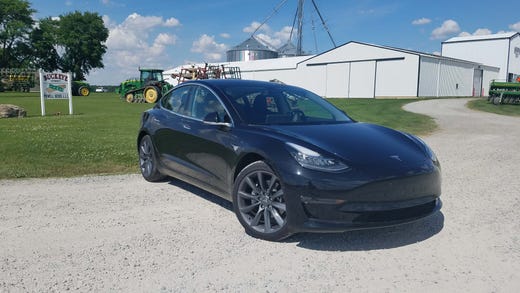 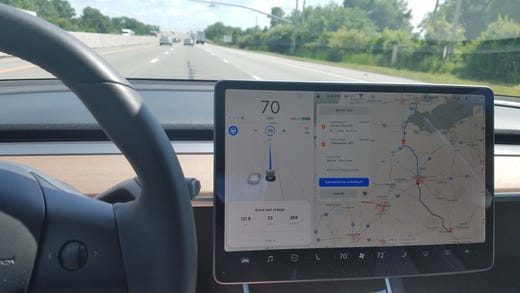 The Tesla Model 3 maps a route to Charleston - with one stop in Grove City, Ohio to recharge. Henry Payne, The Detroit News
Fullscreen 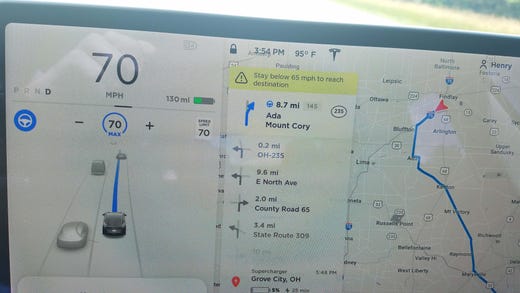 Detour to Dublin. With the Tesla Model 3 running low on battery, Payne detoured to a different Tesla Supercharger rather than risk a run to Grove City. Henry Payne, The Detroit News
Fullscreen

Tesla Superchargers are conveniently located in shopping center so Payne could eat a pizza while he waited 40 minutes for his car to charge. Henry Payne, The Detroit News
Fullscreen 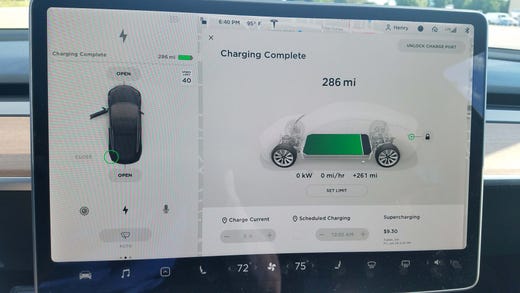 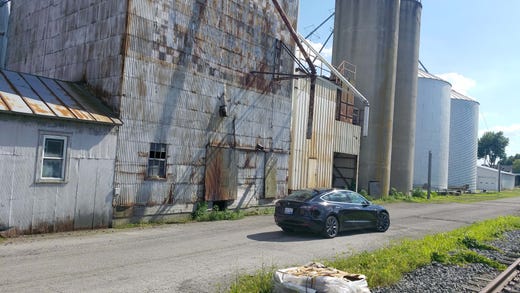 The Tesla Model 3 in rural Ohio where the car's 310-mile range comes in handy. Henry Payne, The Detroit News
Fullscreen 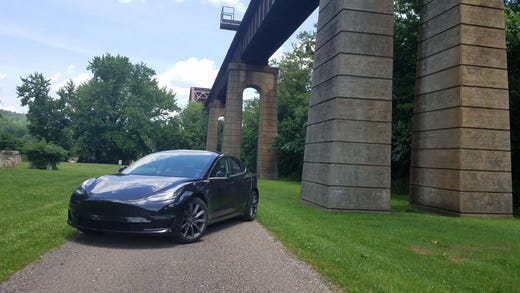 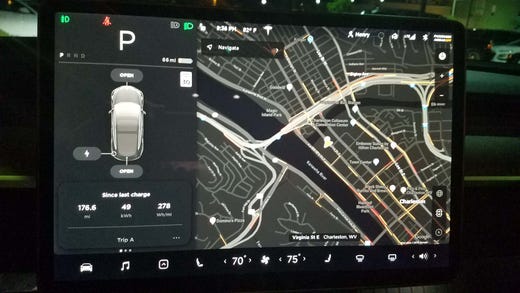 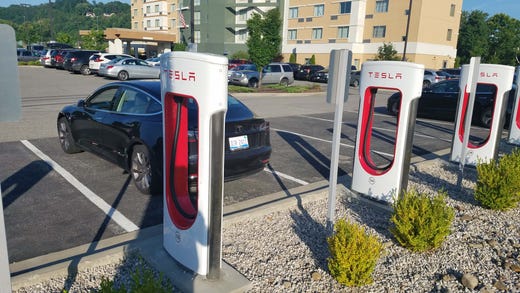 Charleston, West Virgiinia has one Tesla Supercharger - which is a good thing for Tesla owners who make Charleston a destination. Henry Payne, The Detroit News
Fullscreen

In just a decade, Tesla has established itself as America’s premier luxury electric vehicle brand with sleek chariots that accelerate like lightning, wow with ginormous touchscreens, and upgrade over-the-air like smartphones.

But the key to the Silicon Valley company’s success may be that it boasts the most robust EV charging network in the country.

Yet, a summer of traveling in a Model 3 around the Midwest provides a cautionary tale on the challenges facing EVs as more Tesla competitors come to market. Extensive as Tesla Inc.'s network is, it still has major blind spots. Combined with battery-powered vehicles’ sensitivity to weather swings and higher speeds makes them a risky purchase to most people looking to buy a car today. 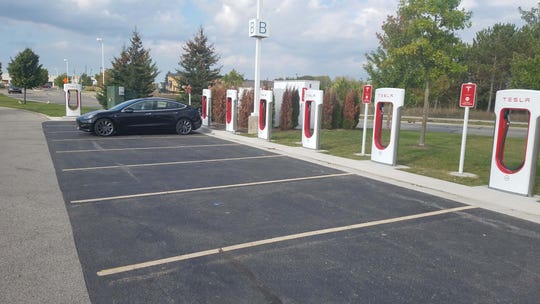 Detroit News auto critic Henry Payne made a long stop at the Gaylord supercharger on the way to Charlevoix in his Tesla Model 3. (Photo: Henry Payne, The Detroit News)

I bought a Tesla Model 3 a year ago both because of the Silicon Valley company’s daring re-imagining of the automobile — but also because I wanted to report on an electric car that is the first serious alternative to gas power in my lifetime.

I have given dozens of drives to friends interested in the car. All of them have been blown away by its speed and innovation, from its intuitive voice commands to its self-driving capabilities. Yet nearly all of them have also balked at the idea of owning an EV because of the limitations on long distance driving.

For good reason. EVs today are for first adopters — not folks who take America’s gasoline infrastructure for granted. As Ford, Audi, Volvo, and other manufacturers come into the EV space — brands that do not have the EV brand strength of Tesla — they face a difficult market where busy Americans demand immediate re-charging infrastructure whether for their phones — or cars.

I set out in August on a 310-mile charge to visit family in Charleston, West Virginia.

With cutting-edge electronics, my Model 3 is deeply integrated into Tesla’s proprietary charging network. “Navigate to Charleston, West Virginia,” I said to the car. Moments later the Tesla had mapped my route around Tesla’s Midwest charging network.

With the Tesla Model 3's range degrading rapidly in pouring rain, the car tells Payne he has to find a charger if he is to make it home. (Photo: Henry Payne, The Detroit News)

The big, 15-inch screen indicated a detailed itinerary where I would only need to recharge south of Columbus in Grove City (for 25 minutes) to make it to Charleston with 16% of charge left. The stations have multiple stalls, are conveniently located in shopping centers, offer fast, 150kw charging, and are maintained by the company.

It’s like going to a Chick-fil-A chain to eat: The service is always uniform, the product always good.

Try that in  any other car and you’re at the mercy of a hodge-podge network of chargers operated by a variety of providers from auto dealers to EVGo. My experience with these networks in a Jaguar I-Pace, Nissan Leaf and Chevy Bolt has been inconsistent.

Electrify America — funded by Volkswagen AG as penance for its Dieselgate sins — promises an extensive, nation-wide network to compete with Tesla. But for now it lags. For example, it only has one charging center in the Columbus area, while Tesla has four.

Turns out that would be crucial to my journey. As I traveled south down I-75, the temperature rose from 75 degrees to 95 in Buckeye country. Nothing degrades a battery like temperature.

The car told me I would have to slow down to 55 mph to make it. The heck with that. To quote Sammy Hagar, I can’t drive 55 (and traffic would run over top of me). 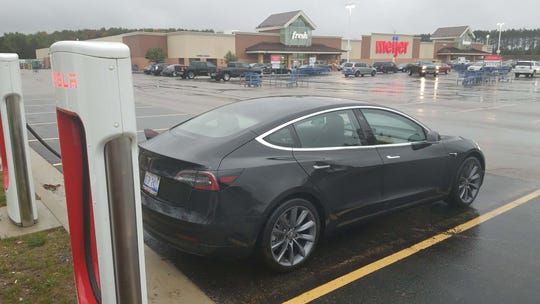 Happily, I knew (from my own checking) there was a closer, north Columbus (Dublin) charger so I stopped there instead. I ate a pizza while I waited, and was back on the road in 40 minutes. Of course, I also knew that Charleston had a single Tesla supercharger that I could use for my weekend there.

Not so Charlevoix, Michigan.

I made an Up North trip (one of a few) in September for a getaway weekend to meet my wife (who had gone ahead early with friends). Once again, the car mapped my trip and told me I could make it to the charming Lake Michigan burg without recharging. Well, no.

Charlevoix doesn't have a Tesla Supercharger. Indeed, it doesn’t have any chargers at all. Not even a 240-volt charger. Try to charge on a 110-volt wall socket and I would be lucky to get 30 miles of range in 10 hours (a previous journey in a plug-in Caddy netted me 30 miles in 24 hours).

So I stopped in Gaylord — the last Tesla Supercharger in north Michigan — to top up for the weekend. It would have to last me for three days in Charlevoix. Good thing my wife and I didn’t plan to drive much. Keeping enough range on the Model 3 to get back to Gaylord for the trip home meant no long adventures to say, Sleeping Bear Dunes (160 mile round trip).

Mother Nature would throw us another curve ball on the way home.

After topping up to 312 miles in Gaylord for an easy trip home in 65-degree weather, the Model 3 mapped the 214 miles home to Oakland County with arrival by 11.12 PM. Driving in downpour south on I-75, the Tesla began to drink electrons.

After 44 miles, the battery had lost 72 miles of charge, a staggering 40% degradation of range. More range degradation than I had experienced even in sub-30 degree weather. Because the electric motor was working hard to push rain out from the tires? Because of energy loss from windshield wipers and climate defrost? Engineers I've talked to have been mystified (Tesla couldn't be reached for comment).

Again, I knew there was a Supercharger in Bay City. We stopped an recharged. And ultimately arrived home at 12.45 a.m., much later than planned.

Fortunately, we did have the luxury of not being on time. And fortunately, a reliable Tesla charger was within reach. My friends roll their eyes at such tales. For them, the idea of planning trips around their car's refueling uncertainties is an inconvenience they're not willing to take.