The 2020 Honda Civic Si, with standard limited-slip differential and adaptive cruise control, is a blast to drive on the track and off. At $25,930 it competes against other pocket rockets like the VW Gold GTI and Hyundai Sport. Henry Payne, The Detroit News
Fullscreen 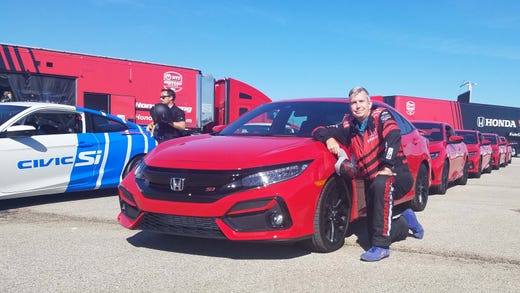 Detroit News auto critic Henry Payne took the 2020 Honda Civic Si out for a spin around Circuit of the Americas raceway in Austin. Henry Payne, The Detroit News
Fullscreen 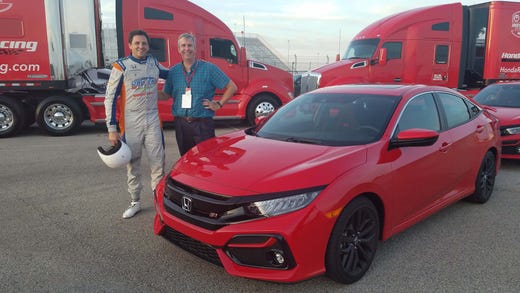 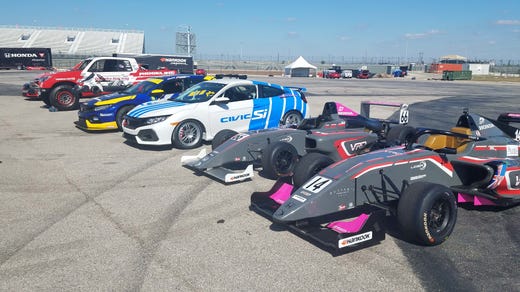 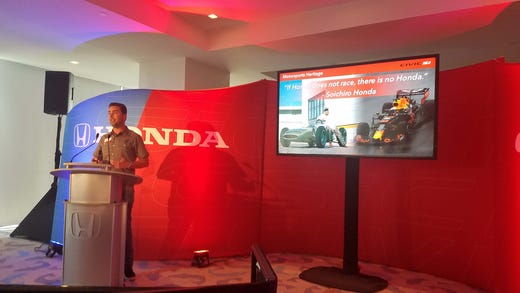 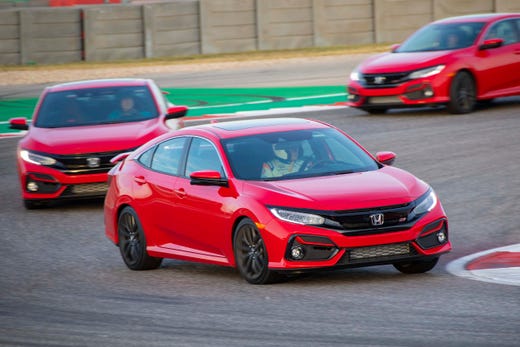 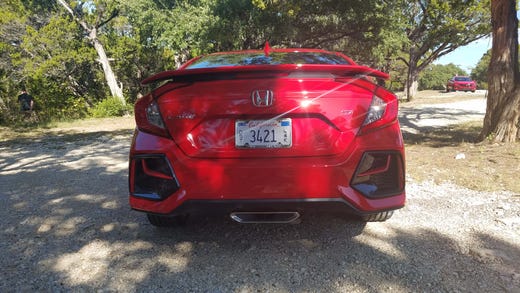 The 2020 Honda Civic Si is distinguished from the rear by its wing and center tailpipe. Henry Payne, The Detroit News
Fullscreen 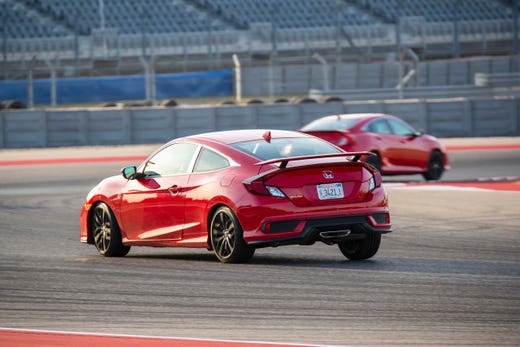 The 2020 Honda Civic Si coupe features a slightly different rear end than the sedan — and features less headroom, which can pinch a tall driver in a helmet. Wesley Allison, Honda
Fullscreen 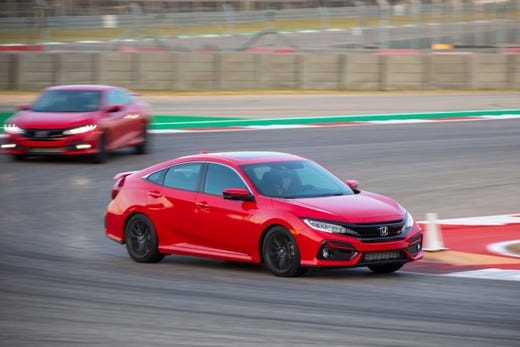 With a taut chassis and limited slip differential, the 2020 Honda Civic Si is surprisingly nimble through Circuit of the America's challenging corners. Wes Allison, Honda
Fullscreen 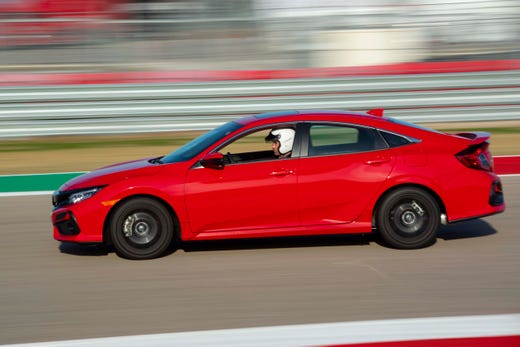 My how you've grown. The 10th-gen 2020 Honda Civic Si is considerably bigger than when it debuted in 1985 as a third-gen hatchback. Yet it's even more nimble at speed. Wes Allison, Honda
Fullscreen

The 2020 Honda Civic Si features a digital instrument display — though some features can be hard to read. Not the fuel reading, however; the tank drained after a fast day on track. Henry Payne, The Detroit News
Fullscreen 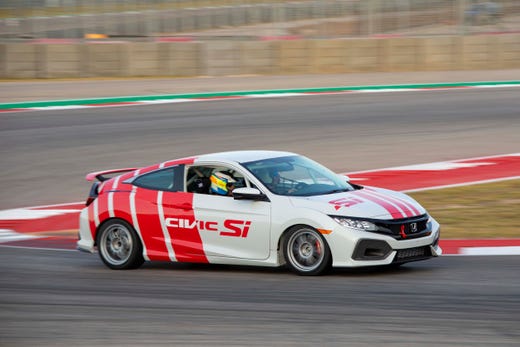 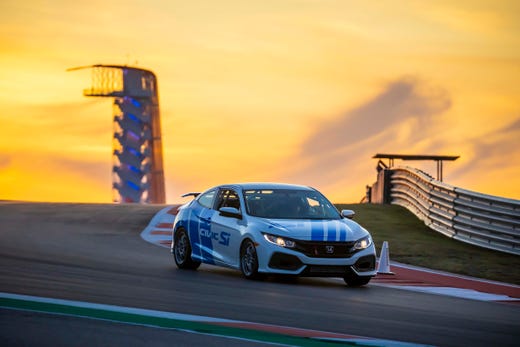 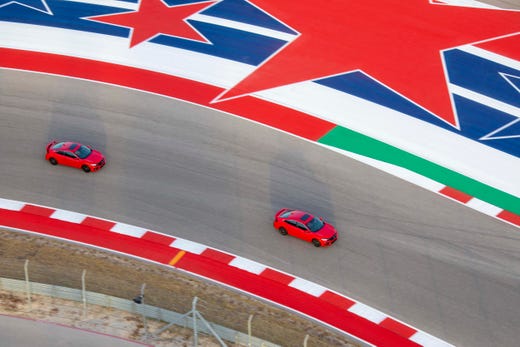 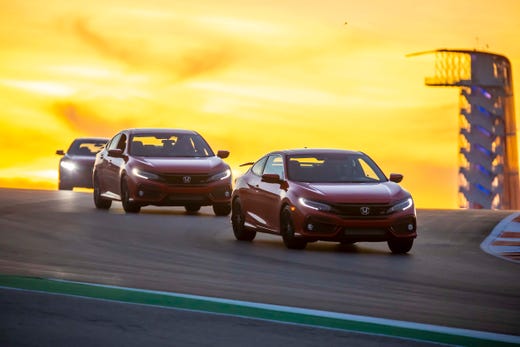 A trio of 2020 Honda Civic Si funboxes crest Turn 10 at Circuit of the Americas in Austin. The wee Honda was a blast around the epic F1 track. Wesley Allison, Honda
Fullscreen 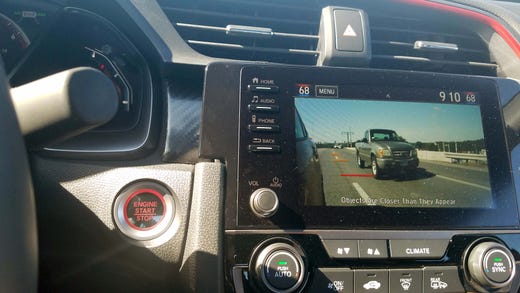 Turn the right turn signal in the 2020 Honda Civic Si and the infotainment screen lights up with a blind-spot view of traffic. Alas, the same feature is not available on the driver's side. Henry Payne, The Detroit News
Fullscreen 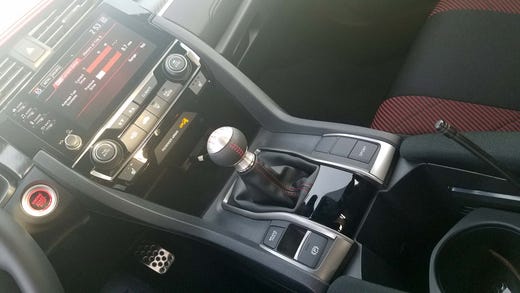 The 2020 Honda Civic Si console is a versatile wonder with up-front storage, configurable center storage thanks to sliding cupholders, and more storage under the bin top. Henry Payne, The Detroit News
Fullscreen 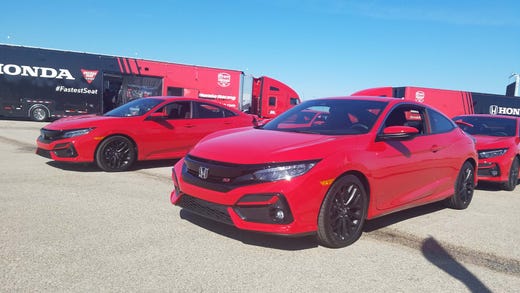 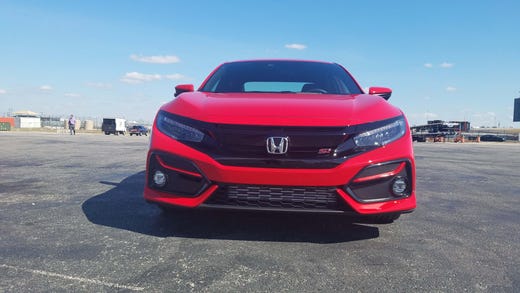 The 2020 Honda Civic Si is visually little changed from when it debuted in 2017. How to tell the 2020 car apart? The body-colored front bars in the fog-light display -and standard LED lights. Henry Payne, The Detroit News
Fullscreen 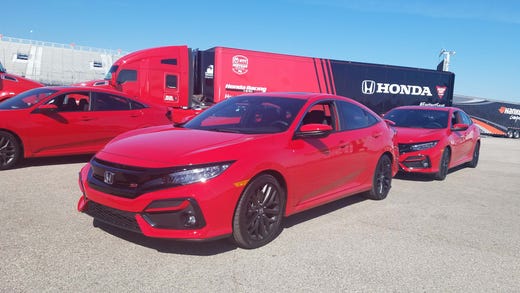 Detroit News auto critic Henry Payne carves through the Circuit of the Americas' Turn 13 in a 2020 Honda Civic Si. With a taut chassis and limited slip differential, the Si is surprisingly nimble through corners. Wesley Allison, Honda
Fullscreen 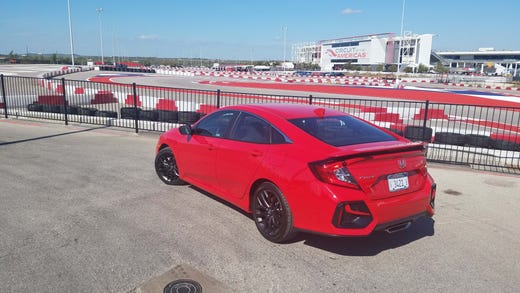 The 2020 Honda Civic Si comes as a sedan or coupe. For a hatchback version of the Civic, shoppers should look for the Sport of Type R models. Henry Payne, The Detroit News
Fullscreen 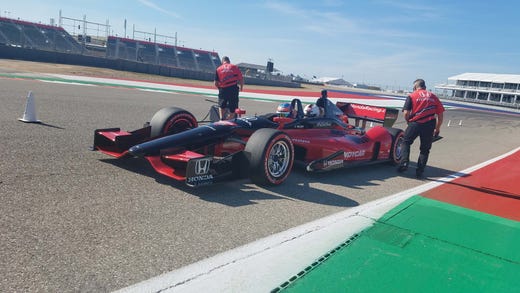 Honda has racing in its blood. It is one of two manufacturers providing engines to IndyCar. It offers fans thrill rides in this two-seat, Honda-powered IndyCar. Henry Payne, The Detroit News
Fullscreen 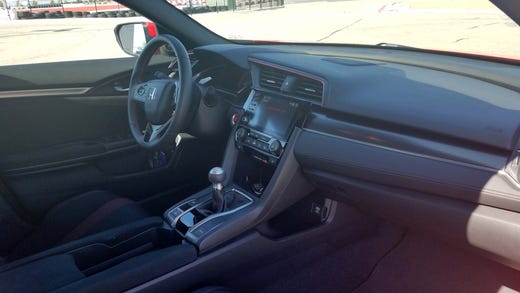 The interior of the 2020 Honda Civic Si adds a proper knob to the infotainment touchscreen for volume control. Apple Carplay and Android Auto are standard for easy navigation in a $25K car. Henry Payne, The Detroit News
Fullscreen 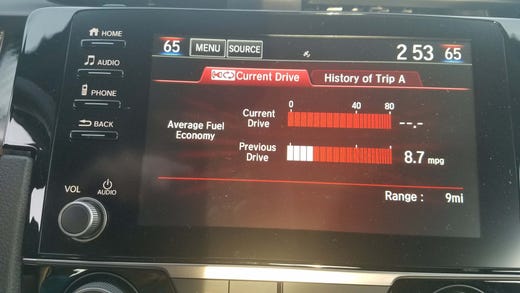 Your mileage may vary. On the road, the 2020 Honda Civic Si will get an average of 30 mpg. After repeated floggings on Circuit of the Americas, mpg readings were under 9 mpg. Henry Payne, The Detroit News
Fullscreen

They say the transportation future is autonomous. That’s hard to believe as long as there are cars like the 2020 Honda Civic Si.

At just $25,000 the athletic, tech-tastic Si is a gateway drug for young auto enthusiasts.

I’ve been in the bag for the Civic Si since I bought a 2006 coupe with an i-VTEC engine that revved to 8,250 rpms. The four-banger let out a full-throated wail over 5,600 rpms that would wake the dead. My two 20-something sons learned to drive on a track in that car and they, too, are hopeless auto addicts.

The glorious 2.0-liter, 197-horse VTEC is no more, a victim of the nanny state and its emissions agenda. But the 2020 Civic Si is a worthy successor to my 2006 hellion.

Only Honda engineers know what an evolution of my screaming i-VTEC would be capable of today (210 horses? 220?) But the smaller 1.5-liter turbo hamster wheel that debuted two years ago is a remarkable machine that puts out 205 horsepower.

Where the VTEC had to be rowed hard above 6-grand to find its torque band, the turbo has grunt aplenty at 3,000 rpms. Turbo lag is minimal off corners, and by the time the hamsters get to 6,000 they are out of breath. Gone is the glorious music of that 8,000-rpm i-VTEC — but, hey, U2’s days of writing epic Irish anthems like “Sunday Bloody Sunday” are behind it as well.

Yet they’re still writing hits. So is the Civic Si.

The joy of this car is the Nürburgring-tested chassis, a remarkable tool in a $25,000 car. I marvel at the sophistication of mainstream vehicles compared to their luxury betters — the $35,000 Ford Mustang HiPo that imitates a BMW 3-series, the $40,000 Kia Telluride that looks like a $70,000 Audi Q7. So, too, the Civic Si.

Underneath the racy boy-toy styling of the Si — I swear the initial design drawings were rendered in crayon — is a remarkably mature front-wheel drive package with limited-slip differential, magnetic shocks, electronic steering and the best manual shifter this side of a Porsche.

I flung the Si through the writhing esses of Circuit of the Americas race track in Texas, expecting the front-drive car to push like an offensive tackle on a corner sweep. But my red athlete rotated with remarkable ease and encouraged more throttle. Though not nearly as athletic as the asphalt-sucking $90,000 Mustang GT500 I tested two weeks ago at Las Vegas Motor Speedway, the Si was no less fun to drive through the twisties. Its chassis stayed glued to apexes, brakes biting hard lap after lap.

Brakes have been the bane of my existence in my $57,000, rear-wheel-drive Tesla Model 3. They overheat after just two hard laps on track, smoking and smelling like a bonfire. Yet, with only a performance pad upgrade (same as my Tesla), the brakes on my $25,000 Civic never flinched around the demanding 3.5-mile COTA course. 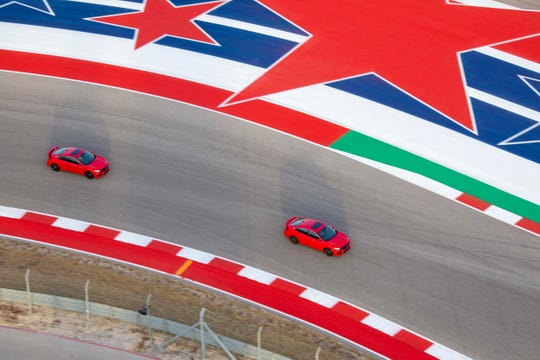 Even as I wrung its neck, the Si treated me with hospitality. The bolstered cloth seats (red-accented for the updated 2020 model) are so good I never gave them a thought until now, and the notchy six-speed is intuitively positioned for quick shifts. I flogged both sedan and coupe versions (giraffes like me will prefer the sedan, as it's easier on the neck, but the rear seat is easy on long legs.

What makes the Si so worthwhile is how — when you’re done dancing with it — it is quite willing to be a progressive daily driver.

Standard on the Si is Honda Sensing (even standard on the entry-level, $20,680 Civic), the brand’s radar-enhanced safety suite that includes self-driving features like adaptive cruise-control and automatic emergency-braking. Civic’s adaptive cruise-control allows easy highway cruising or an extra security blanket in stop-and-go traffic. I can even attest the emergency braking works, thanks to some rapid closing maneuvers under braking at COTA.

The competition in the compact segment is relentless, however, and the Civic’s interior feels dated compared to spiffy new entries like the Hyundai Elantra and Mazda 3. Despite a nifty digital tach, Honda’s graphics are small and steering controls plasticky. With a major Civic update looming in 2021, expect upgrades.

What is not lacking is Honda’s signature passenger-friendly interior. No one does consoles like Honda. Big-brother Pilot SUV has the best center console in ute-dom and the Civic makes a case for best compact car console.

An infotainment tablet sits high on the dash for easy viewing, which in turn opens up storage below for keys, French fry boxes and Apple CarPlay connectivity. A deep, versatile center console features sliding cupholders.

As regular readers know, I’m a hatchback fan, and the Si comes only in coupe and sedan flavors. The trunk space is ample, but I prefer Civic Sport and Type-R hatchback variants for better cargo access. With sporty hatch competitors out there like Mazda 3 and Golf GTI, the Si will lose some customers willing to pay for their convenience.

But with its racy styling, glued handling and standard features, the Si is a peerless $25,000 performance value.

While Detroit makers have abandoned small cars, Si and company offer new buyers an entrée to driving fun. To lure shoppers, the 2020 model is distinguished by its body-colored eyeliners under the new LED headlights — and wicked, black wheels that contrast with a Skittle bag full of flavors from Rallye Red to Crystal Black Pearl to my favorite, Tonic Yellow Pearl.

Speaking of value, Si can also be had as a $52,000, slick-tire shod, roll-caged SCCA racer when you want to taste even more g-loads on track. That’s what gateway drugs lead to. 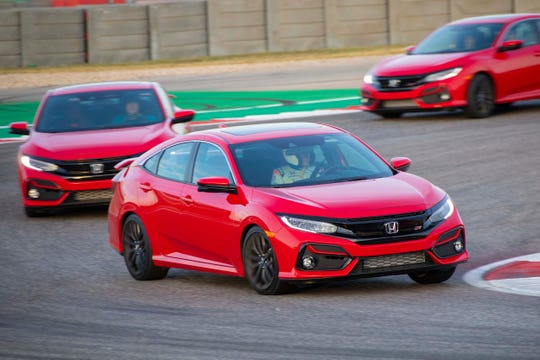 Autonomous car future? I think it just got pushed back another generation.

Highs: A blast to drive on track or off; versatile console