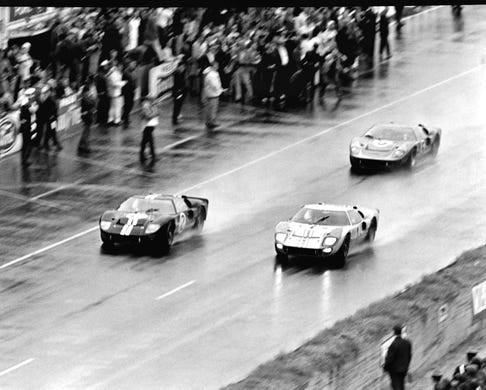 The finish of the 1966 Le Mans race. The #1 and #2 Ford GT40s crossed the line ahead of the #5 car. Though Ford wanted the #1 car driven by Miles/Hume to win, the #2 car of McLaren/Amon was awarded first because it started further back on the grid. Ford Archives, Ford
Fullscreen 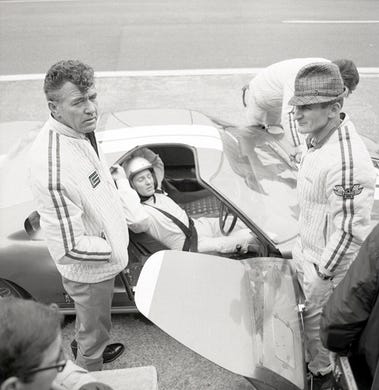 Ford handed the GT40 to Carroll Shelby's (left) race team with the goal of winning Le Mans. In the pits at Le Mans, Shelby's chief engineer/driver Ken Miles is to the right while ace driver Bruce McLaren sits in the cockpit. Ford Archives, Ford
Fullscreen 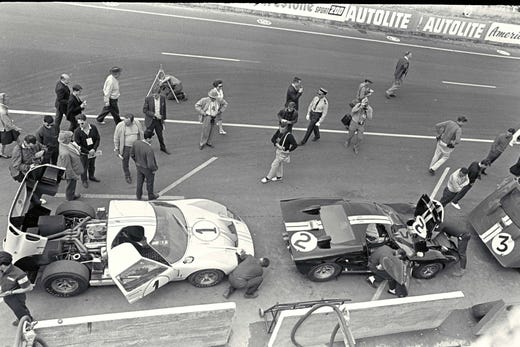 The winning #2 Ford GT40 and second-place #1 car in the Le Mans pits prior to the 1966 race. Ford, Ford
Fullscreen 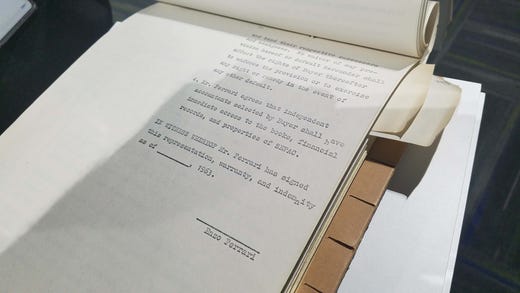 The contract drawn up by Ford to merge Ford and Ferrari in 1963. Enzo Ferrari's signature never appeared on the bottom line. Ford Archives, Ford
Fullscreen 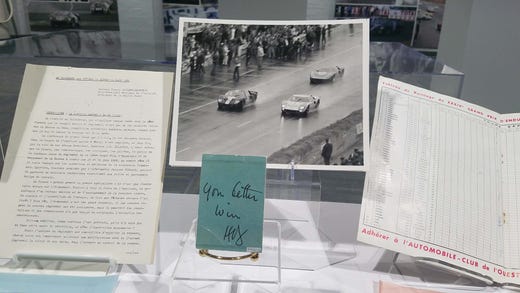 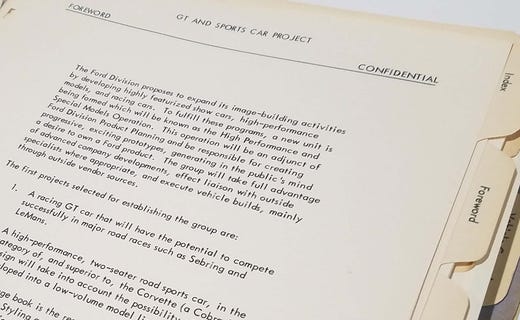 The original mock-up of the Ford GT looked a lot like original sketches of the Ford Mustang. The Mustang evolved into a sport coupe - the GT40 became a classic race car. Ford Archives, Ford
Fullscreen 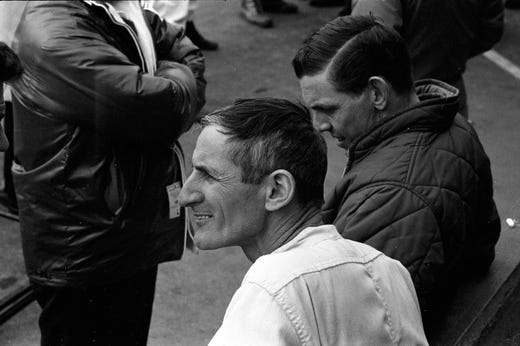 Ken Miles was Shelby's competition director. A successful US racer, he was thrust into the international limelight as the Ford GT40's chief engineer and driver. He proved himself one of the fastest drivers in the world in Ford's quest to beat Ferrari. In the GT40, he narrowly missed becoming endurance racing's first triple crown winner of Daytona, Sebring, and Le Mans. Ford Archives, Ford
Fullscreen

The start of the 1966 24 Hour of Le Mans. Having waved the starting flag, Henry Ford II (second from right in khaki pants and jacket) hustles across the track while the drivers spring to their cars. The Ford GT40's dominated qualifying with Dan Gurney on pole (#3) and Ken Miles second (#1). The fastest Ferrari started fifth. Ford Archives, Ford
Fullscreen 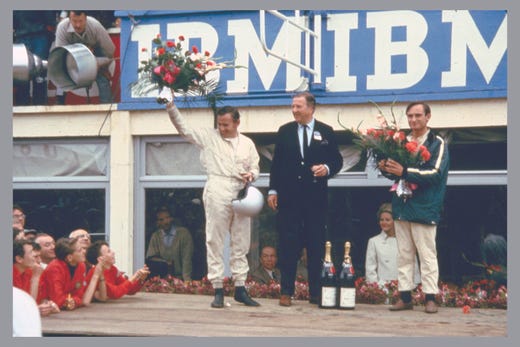 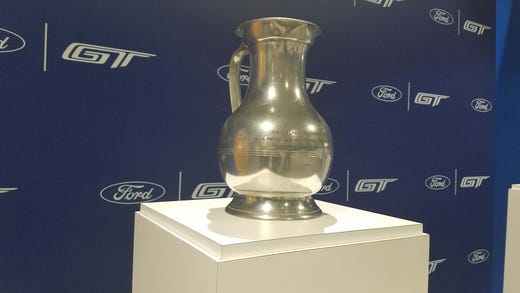 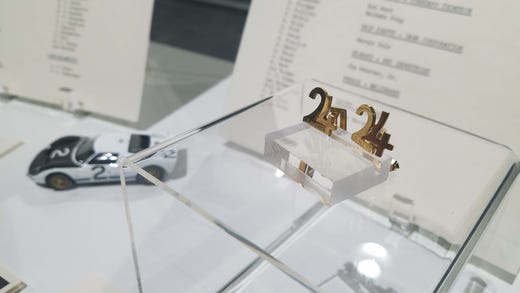 After Ford dominated the 1966 24 Hours of Le Mans race, Henry Ford II had "24" cufflinks made up for executives involved in the program. Henry's were made of gold. Ford Archives, Ford
Fullscreen 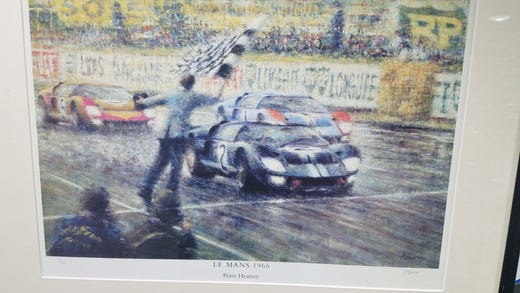 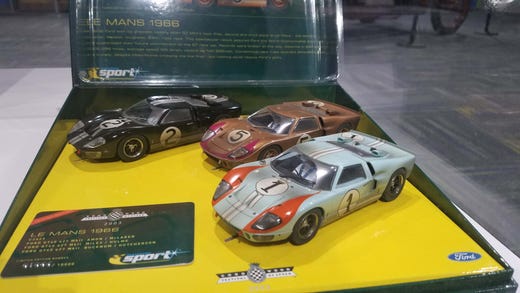 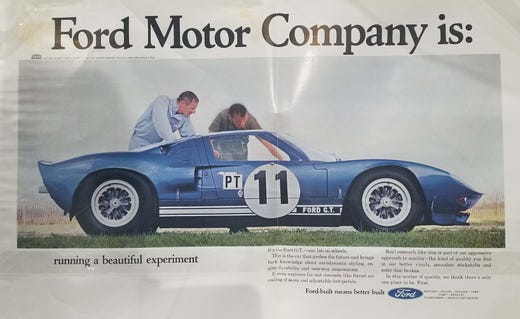 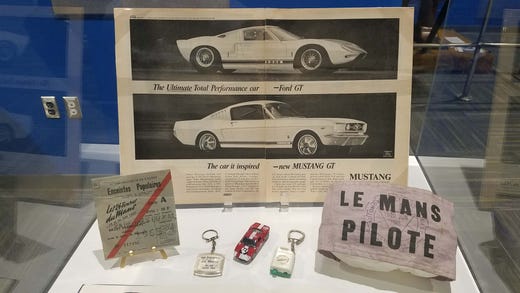 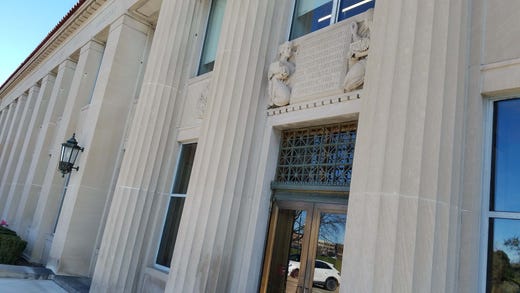 The Ford Archives on the Henry Ford campus catalogs the company's history - including Ford's first win at Le Mans in 1966. Henry Payne, The Detroit News
Fullscreen 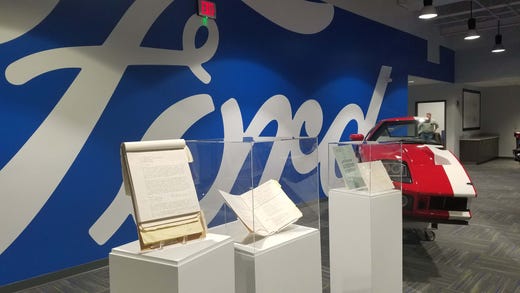 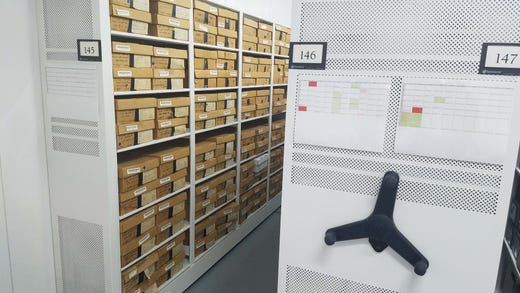 Over the years, Ford designers have preserved every photo/every drawing they have made of Ford cars - including development of the Ford GT40. They are kept in file closets in refrigerated rooms in the Ford Archives. Henry Payne, The Detroit News
Fullscreen

“We had nothing to do with it,” replied the man who oversees Ford racing. “I hope the Ford still wins.”

I’ve seen the movie and Rushbrook can rest assured that the 1966 GT40 still crosses the line first at the legendary 24 Hours of Le Mans in France. The movie is not always so historically accurate. Produced by Disney/Fox, it takes broad artistic liberties with the story of Ford’s epic battle with Ferrari in order to create an action-packed, fist-flying, testosterone-fueled Hollywood buddy movie. Good ol’ boy racers Carroll Shelby and Ken Miles (played by Matt Damon and Christian Bale, respectively) win the world’s greatest endurance race in spite of the stuffed suits in Dearborn.

It makes for an entertaining 2½ hours at the theater.

The start of the 1966 24 Hour of Le Mans. Having waved the starting flag, Henry Ford II (first suit on the left) hustles across the track while the drivers spring to their cars. (Photo: Ford)

But the real story of Ford’s historic win is just as compelling, even if it can’t be condensed into a 153-minute blockbuster. Ford’s dominance of the 1966 Le Mans under the management of the wise-cracking Shelby not only made racing history — it remade Ford as the performance-car company it is today.

So it’s hard to imagine that 60 years ago, Ford didn’t even race.

The company was founded in the early 1900s on Henry Ford’s driving skills — winning races to attract investors. But in the post-World War II era, that racing spirit had been snuffed out. In one of Washington’s regulatory spasms, Congress pressured the Big Three to agree to a “Safety Resolution” swearing off racing as morally irresponsible. The fragile truce unraveled as General Motors secretly poured money into NASCAR racing.

As Pontiac and Chevy dominated NASCAR, sales followed. Win on Sunday, sell on Monday. Feeding a post-war Boomer generation’s need for speed, GM captured 61% of the market share by March 1962. 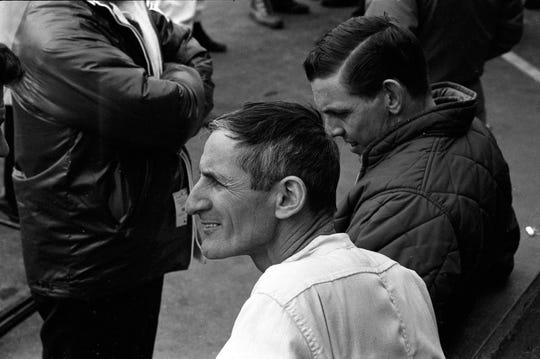 Ken Miles was Shelby's competition director. A successful US racer, he was thrust into the international limelight as the Ford GT40's chief engineer and driver. (Photo: Ford)

Competing not on ovals but on tree-lined road courses, European racing was fast and often fatal. Ferrari drivers dominated the winner circles – and the obituaries – leading to a public outcry. Governments opened investigations into Mr. Ferrari’s enterprise. Once hailed for his automotive genius, Ferrari was scorned as the “Monster of Maranello” (home of Ferrari).

Struggling financially, Ferrari invited Ford as a suitor to acquire the sports-car maker in a clever ruse. Ford took the bait, eyeing the opportunity to grow its European market behind the continent’s sexiest, fastest chariots.

Suddenly Italians awoke to prospect of their national jewel being sold to Americans. The public rallied behind Ferrari and its founder yanked the rug out from under Ford. The unsigned contract that would have created the FeFo Corporation (short for Ferrrari-Ford) sits in Ford’s archives today.

Livid, The Deuce swore to beat Ferrari no matter the cost. In its backyard. At the prestigious 24 Hours of Le Mans 24, where Ferrari had dominated for a decade.

“It’s a great story because it works on so many levels,” says AJ Baime, author of “Go Like Hell,” the definitive book on the Ford-Ferrari clash. “It’s a great sports rivalry, a great business story about Ford trying to relaunch its brand in Europe, about two huge auto companies facing off.”

But the reality was different.

“(The movie) does a good job of selling the story,” Shelby’s grandson, Aaron, said at the Shelby Museum in Las Vegas while standing next to the Ford GT40 that Miles drove in '66. “It will open people’s eyes who have never heard of Shelby.”

Contrary to the movie’s portrayal of Ford as untrusting of the California mod shop, Iacocca had built a healthy relationship with Shelby, providing his Cobra team with Ford engines.

Indeed, Shelby disliked Ferrari as much as The Deuce did. A former Le Mans winner himself in 1959 for Aston Martin, Shelby had seen how Enzo Ferrari pushed his drivers to the ragged limit. 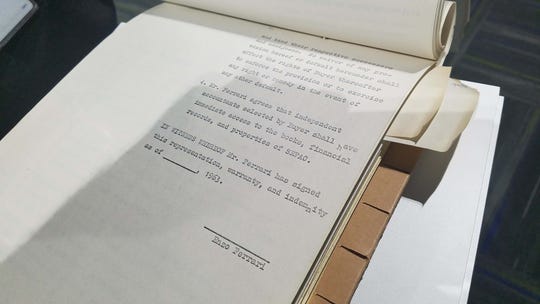 The contract drawn up by Ford to merge Ford and Ferrari in 1963. Enzo Ferrari's signature never appeared on the bottom line. (Photo: Ford Archives, Ford)

When Ford-powered Shelby Cobras beat Ferrari in the GT-class at Le Mans in 1964 – while Ford’s GT40s struggled against Ferrari in the premiere prototype class – Ford handed the reins to Shelby and his brilliant competition director.

“It’s a remarkable piece of history that a company with unlimited funds wound up relying on these World War II-veteran hot-rodders,” says author Baime.

The pairing thrust Miles – a skilled-but-unknown driver played to the hilt by Bale as a quirky, ornery Brit – into the international limelight where he thrived.

Contrary to the film, Ford did not conspire to keep Miles from driving at Le Mans. Nor did Shelby shame The Deuce by reducing him to a shaking puddle of tears after a tire-smoking test drive. In truth, Ford’s technical resources meshed with Shelby-Miles’ racing instincts. Ford II communicated only one message, hand-scrawled on small cards: “You’d better win.”

Miles piloted the 1966 GT40, stuffed with Ford’s brutish 427-cubic inch NASCAR V-8, at speeds over 220 mph against the sleeker 12-cylinder red Ferraris. He barely missed out as endurance racing’s first triple-crown winner of the Daytona 24 Hours, Sebring 12 Hours and Le Mans 24-hour due to a late race technical error.

Miles would perish in a crash – like many of his peers – just two months later. But Fords would win Le Mans three more years running, taking Dearborn to the racing summit it still occupies today.

On the 50th anniversary of Ford’s 1966 win in 2016, Rushbrook’s team led Ford to victory in the 24 Hours of Le Mans’ GT class after an epic duel with a Ferrari 488. The win has helped sell Fords like the Mustang globally, making it the best-selling sports car in the world.

One of the Mustang’s trims is called the Shelby GT350 in honor of the race shop that built Ford’s reputation.