Payne: Jeep Wrangler gets an option for diesel grunt

Payne: Jeep Wrangler gets an option for diesel grunt 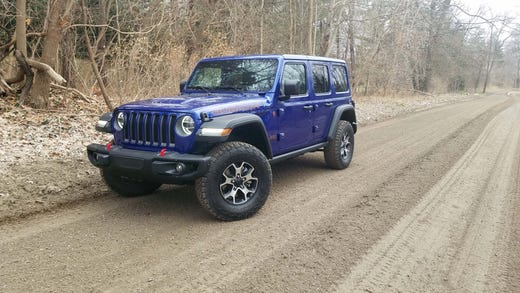 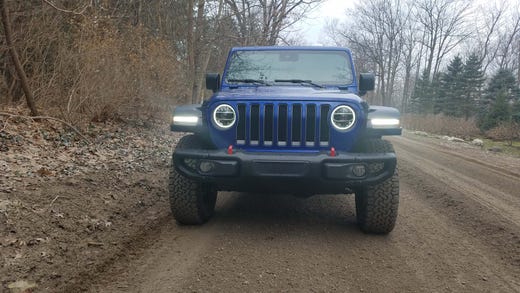 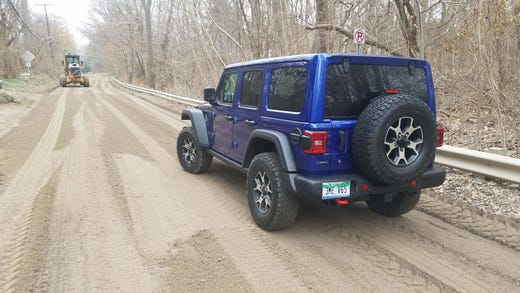 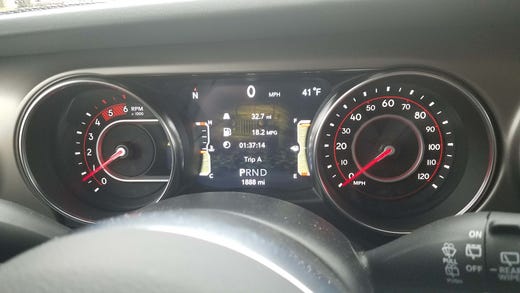 Typical of diesel power, the 2020 Jeep Wrangler Ecodiesel has a low redline of just 4,500 RPM. The torque for stump-pulling is all down low. Henry Payne, The Detroit News
Fullscreen 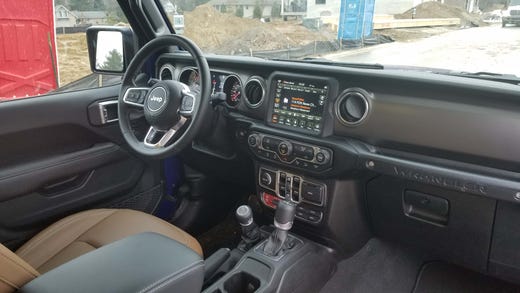 The 2020 Jeep Wrangler Ecodiesel gets all the latest electronic goodies, including UConnect infotainment and Apple CarPlay. Henry Payne, The Detroit News
Fullscreen 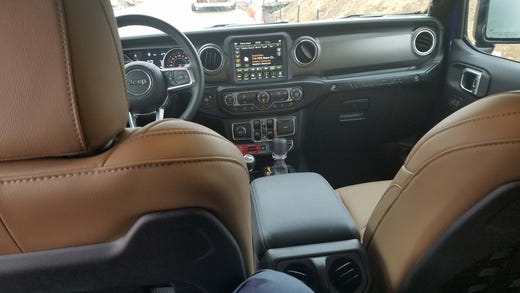 The 2020 Jeep Wrangler Ecodiesel is more refined inside than its predecessors — the rear seat is comfy for 6'5" passengers, but the vehicle is narrow and louder than the average SUV. Henry Payne, The Detroit News
Fullscreen 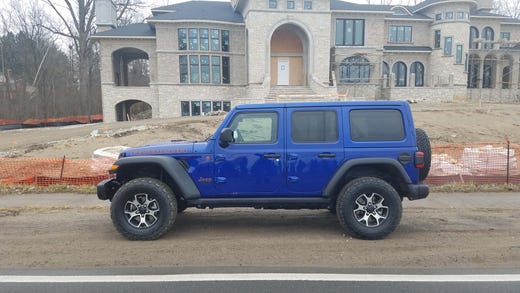 At up to $60,000, the 2020 Jeep Wrangler Ecodiesel is at home in fancy neighborhoods. Henry Payne, The Detroit News
Fullscreen 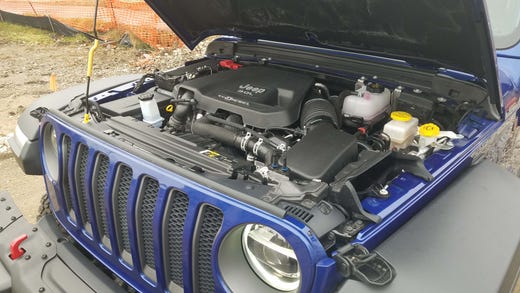 The 3.0-liter diesel turbo-4 is shared with the Ram 1500 pickup truck. It makes a gob-smacking 442 pound feet of torque. Henry Payne, The Detroit News
Fullscreen 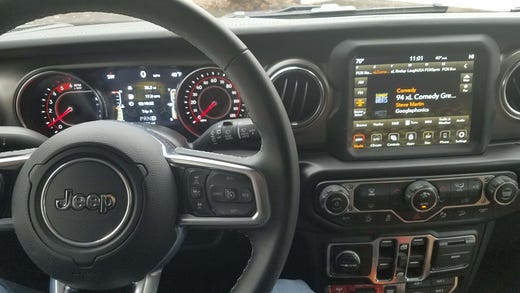 The controls for the 2020 Jeep Wrangler Ecodiesel are at close hand for cruise control, AWD transfer case and your favorite radio station. Henry Payne, The Detroit News
Fullscreen 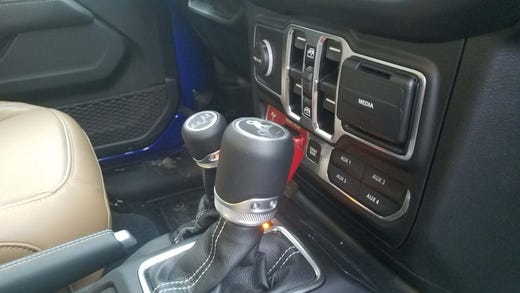 The 2020 Jeep Wrangler Ecodiesel comes with an 8-speed automatic only, and a second shifter for the transfer case to adjust the 4WD system. Henry Payne, The Detroit News
Fullscreen 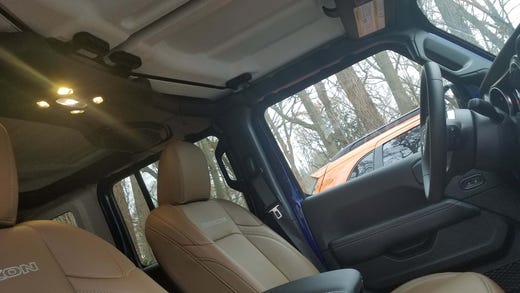 You can take the doors off. The 2020 Jeep Wrangler Ecodiesel is noisier inside than most utes due to its removable panels. But the diesel engine is markedly quieter than diesels of yore. Henry Payne, The Detroit News
Fullscreen 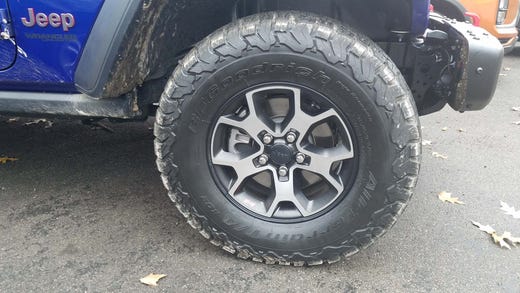 Jeep and mud go together like ketchup and mustard. So do Wrangler and diesel. Henry Payne, The Detroit News
Fullscreen 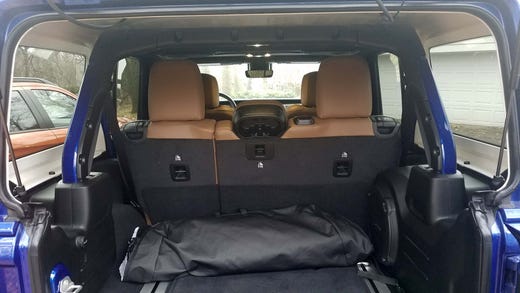 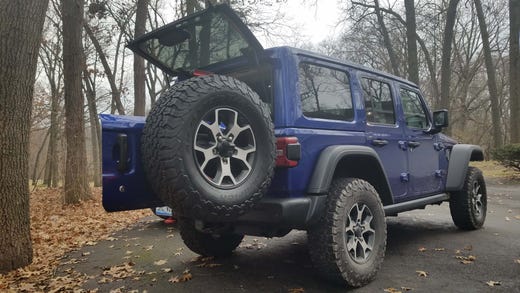 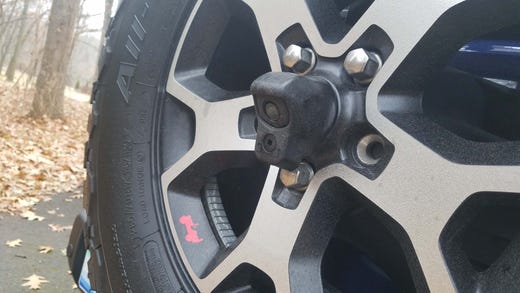 Easter eggs. The 2020 Jeep Wrangler Ecodiesel is full of clever details like a rear-camera washer on the spare tire — and a graphic of the original WW2 Jeep on the wheel. Henry Payne, The Detroit News
Fullscreen 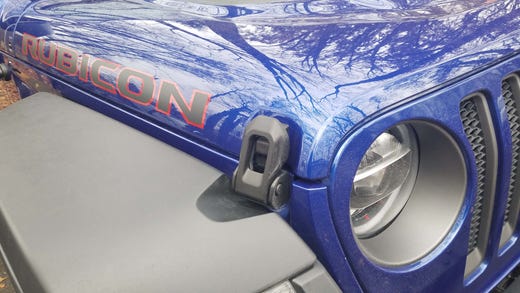 Old school. To open the 2020 Jeep Wrangler Ecodiesel hood, the latches must be unfastened. Henry Payne, The Detroit News
Fullscreen 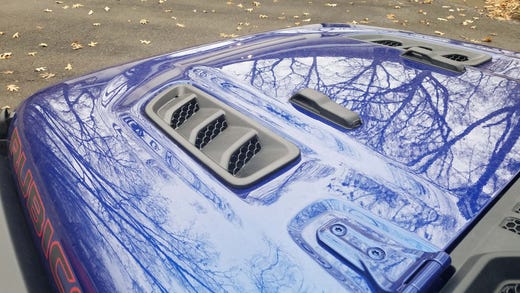 The Jeep Wrangler is a marvelous paradox.

The World War II-inspired vehicle of yore is now the halo car for the best-known lineup of family SUVs in peacetime. It’s coveted by youth, yet has sticker prices only well-heeled grownups can afford. Its latest, the fourth-generation JL model (introduced in 2018), is so rugged it can run through brick walls, but boasts the nameplate’s most sophisticated electronics to date with Uconnect infotainment, Apple CarPlay connectivity and eight-speaker stereo system. 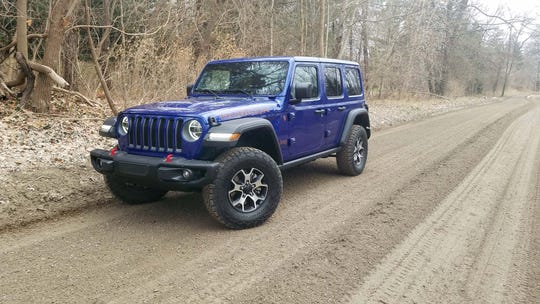 Now comes the first diesel-powered Wrangler. Hold the paradoxes. This may be the most harmonious marriage of Wrangler and drivetrain ever.

The 3.0-liter V-6  EcoDiesel offered on the Wrangler joins the standard 3.6-liter V-6 and 2.0-liter hybrid turbo-4 that hit the market a year ago. The 3.6-liter engine is a reliable old nail that has been pushing Wrangler over boulders since 2012. The “eTorque” mild-hybrid (so-named because it gets 48-volt battery assist) turbo-4 was introduced to impress Washington’s fuel-economy nannies.

If fuel economy is your thing in an off-road Wrangler, then get the diesel. It will use less fuel while pulling stumps out of the ground. 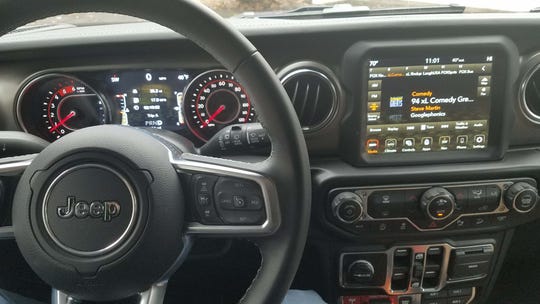 The controls for the 2020 Jeep Wrangler Ecodiesel are at close hand for cruise control, AWD transfer case and your favorite radio station. (Photo: Henry Payne, The Detroit News)

With a jaw-dropping 442 pound-feet of torque, the turbodiesel is the same oil-burner that powers the hulking Ram 1500. But where the pickup has become a ridiculously refined ocean liner (notice trucks these days are as quiet inside as luxury cars?), the Wrangler is still at heart a musclebound, gravel-voiced Army dude.

Sure, the Jeep’s been refined with all the electronic gizmos I listed up top — but this is still a vehicle designed to shed its doors and flatten the windshield so you can get close to nature. You can only insulate an interior so much when its doors are hanging off removable screws and the roof is a plastic cover clipped on to a giant rollbar.

I used to haul my race cars behind an old Ram 3500 diesel that sounded like it was chewing nails for breakfast. The Wrangler diesel reminds of that old bull (absent the idle rattle that has been nicely refined). 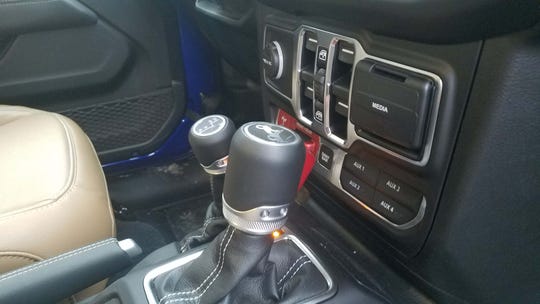 The 2020 Jeep Wrangler Ecodiesel comes with an 8-speed automatic only, and a second shifter for the transfer case to adjust the 4WD system. (Photo: Henry Payne, The Detroit News)

Unlike the 2020 Ram, which purrs so quietly it might be called the 2020 Kitty, the Wrangler’s diesel grunt is apparent as soon as you nail the throttle. Only wind noise over 70 mph will drown it out. It feels genuine. Jeep-like.

It also sports serious torque. Despite weighing 10% more than the V-6 gas model, my 4,862-pound Wrangler diesel porker had 70% more torque. It jumped out of stoplights. All that twist will really come in handy off-road when you need to claw up a hill, churn out of a muddy gulch or pull a buddy out of a ditch.

So I did a day’s grunting around the tony, rutted roads of Oakland County. It seems like the dirtier the roads, the more polished the homes. These wagon roads must seem daunting for folks at the end of the long day. 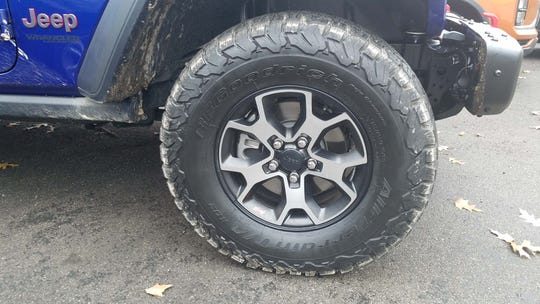 I got my Cadillac XT5 detailed at Jax Car Wash this morning, and — dang! It’s rained and I gotta slog the last half-mile home through mud!

That’s where my four-wheel drive, $60,000 Wrangler Rubicon diesel comes in. It looks even better dirty. Loaded to the gills with all the goodies, it costs $6,000 more than the gas-powered V-6-equipped model.

One mansion-lined muddy road in particular caught my fancy — it was being groomed by a backhoe. The grimy trail was alternately piled with fresh dirt or pocked with watery potholes from the winter season.

Whatever. The Wrangler didn’t mind.

True to Jeep’s raw heritage, I stopped to mechanically select four-wheel drive via a second shifter in the console. Then the little tank happily chewed up the terrain, its 10.8-inch ride-height well clear of ground nuisances. 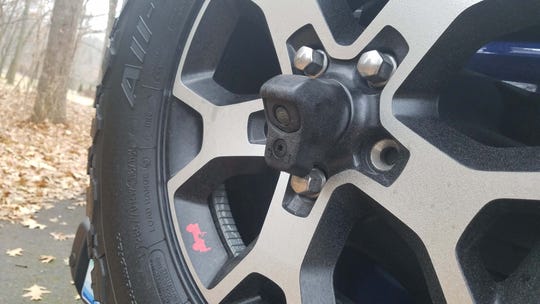 Easter eggs. The 2020 Jeep Wrangler Ecodiesel is full of clever details like a rear-camera washer on the spare tire — and a graphic of the original WW2 Jeep on the wheel. (Photo: Henry Payne, The Detroit News)

The diesel’s 442 pound-feet of torque is also well beyond the 295 pound-feet of the hybrid turbo-4, which is $4,500 cheaper. You’ll never get back the diesel’s price premium over the turbo-4 in gas savings, but dang if the diesel growl doesn’t fit the Wrangler’s tough-guy trucker mood better than the common gurgle of the four-cylinder.

Unfortunately for passengers, the Wrangler rides like a truck. Based on a ladder frame, it can be unforgiving — even compared to its Gladiator pickup sibling which shares the Ram 1500 diesel’s more-sophisticated five-link rear suspension. The Ram also offers an air-ride option.

Happily, the Wrangler’s stereo speakers are cleverly located in the rear ceiling so passengers can hear the excellent UConnect radio. And air vents help keep the rear climate under control. 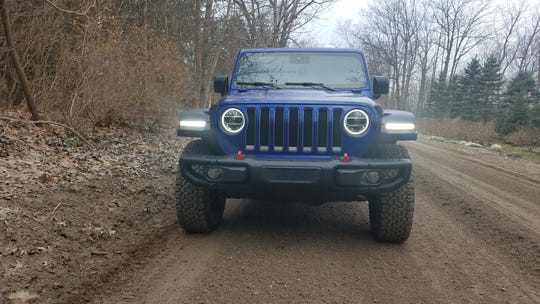 For Wrangler owners who want to explore the woods beyond their ZIP code, the diesel offers a healthy 500-plus miles of range. It should easily haul 3,500 pounds if you want to bring along dirt bikes.

Long trips can be tight, especially for the broad of shoulder. For your 6-foot-5 basketball-playing tester, the Wrangler is narrow inside. And with the rollcage overhead, getting in and out requires care.

Driving the Wrangler is a visceral experience. The exterior oozes macho with big hood vents to better circulate engine air. The classic round lights and seven-slot grille are right out of a World War II history book. Drop the windshield, doors and roof — and throw on Rubicon’s 33-inch knobby tires — and it has a personality all its own. 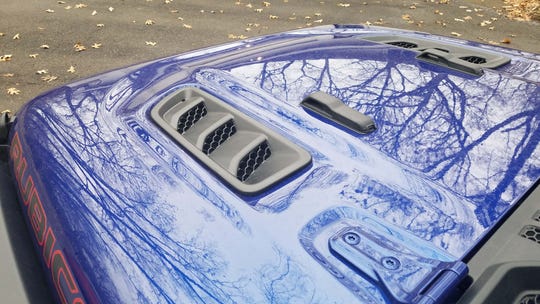 Mix in diesel to the recipe and the off-road package is complete.

The common SUV has come a long way in the last three decades, from truck-based haulers to today’s comfy unibody-based family wagons. The downside is that five-door, four-cylinder utes can appear to be cookie-cutter lookalikes.

Enter the Wrangler. Truck-based and diesel-powered, it's an old-fashioned icon. The diesel option is available on all Jeep trims — Sport to Rubicon — though not available as a two-door.

There is one paradox worth mentioning, however. The all-American Wrangler gets its diesel engine from Italy. 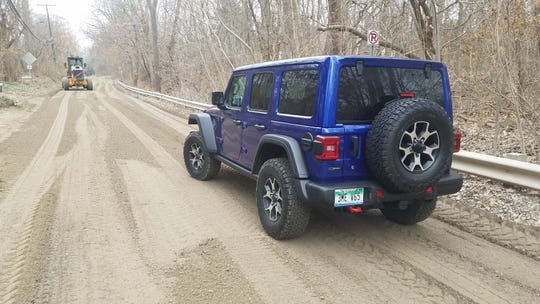