Payne: 2020 Toyota Highlander steps up to the challenge

Long the segment leader, the sedate Highlander had some catching up to do to the Kia and Hyundai upstarts. The Toyota is a wallflower no more.

Payne: 2020 Toyota Highlander steps up to the challenge 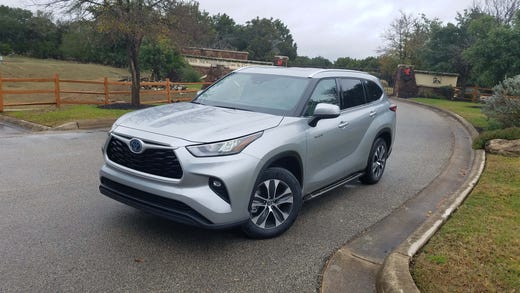 The 2020 Toyota Highlander is the most stylish version yet, with a Tacoma-like front married to shapely Supra-inspired rear haunches. Henry Payne, The Detroit News
Fullscreen 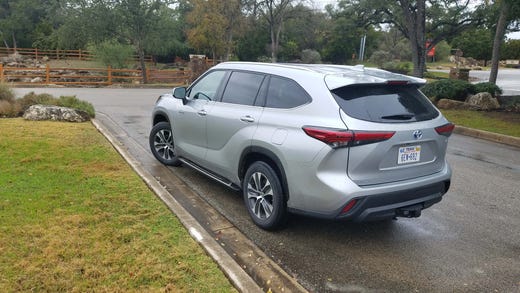 The rear of the 2020 Toyota Highlander is unusually muscular for a family ute. Henry Payne, The Detroit News
Fullscreen 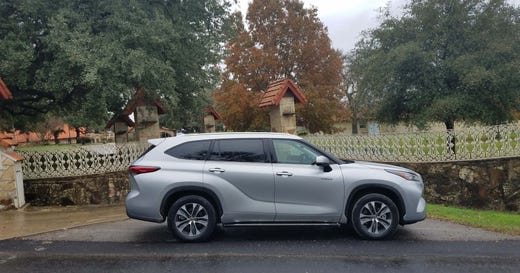 A wallflower no more. For 2020, the Toyota Highlander gets an all-new wardrobe. Henry Payne, The Detroit News
Fullscreen 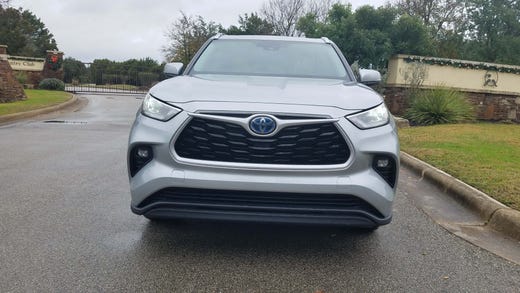 The front of the 2020 Toyota Highlander picks up cues from the Tacoma pickup. Henry Payne, The Detroit News
Fullscreen 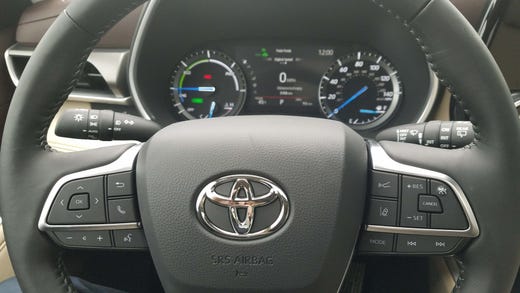 Switchgear on the 2020 Toyota Highlander is intuitive and oozes quality. Henry Payne, The Detroit News
Fullscreen 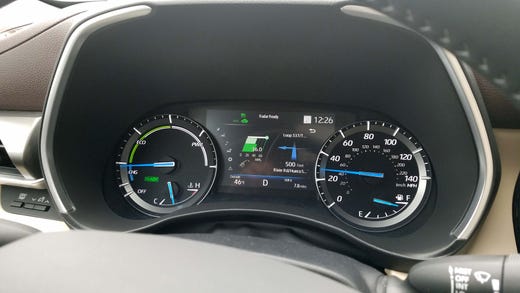 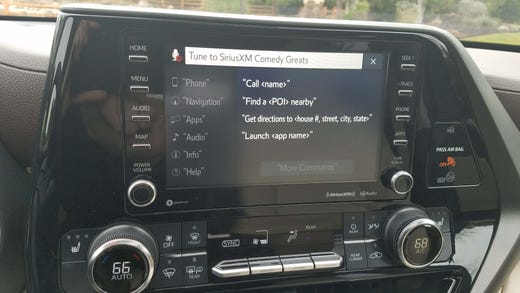 The voice commands on the 2020 Toyota Highlander are greatly improved. Henry Payne, The Detroit News
Fullscreen 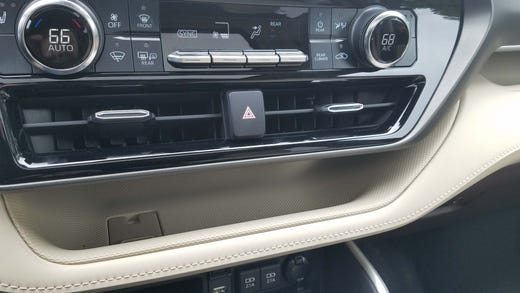 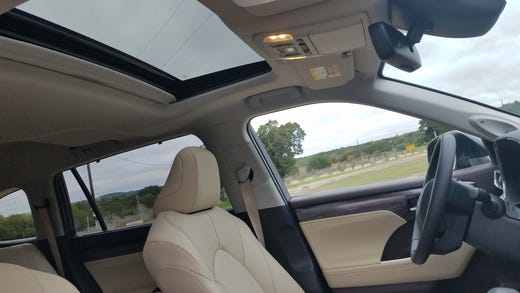 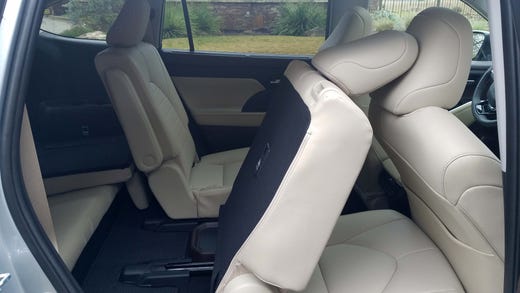 With the pull of a tab on top of the middle seat, the third-row of the 2020 Toyota Highlander is instantly accessible. Henry Payne, The Detroit News
Fullscreen

Not the V-6. The 2020 Toyota Highlander offers a 2.5-liter inline-4 plus AC motor hybrid unit that gets 55 percent better fuel economy than its gasoline sibling. Henry Payne, The Detroit News
Fullscreen 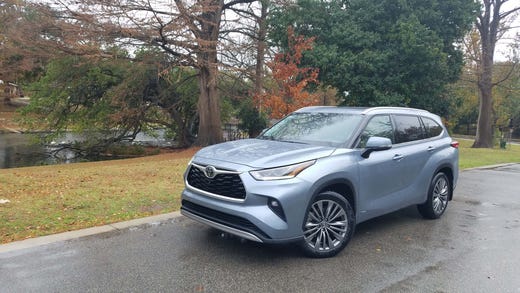 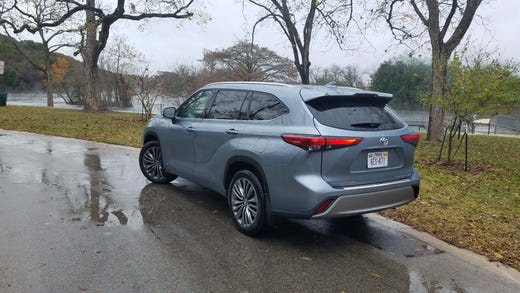 With stylish wheels and a subtle blue wardrobe, the 2020 Toyota Highlander Platinum will make you forget the stodgy Highlanders of old. Henry Payne, The Detroit News
Fullscreen

Even at $39K, a 2020 Toyota Highlander LE looks snazzy inside. Henry Payne, The Detroit News
Fullscreen 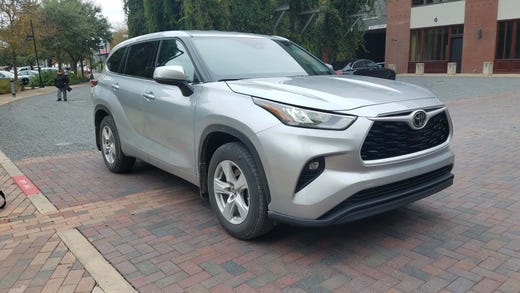 Value is the name of the game. For less than $40K the 2020 Toyota Highlander LE comes with a bucket-load of standard features. Henry Payne, The Detroit News
Fullscreen 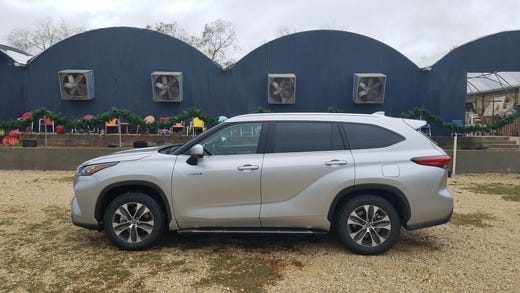 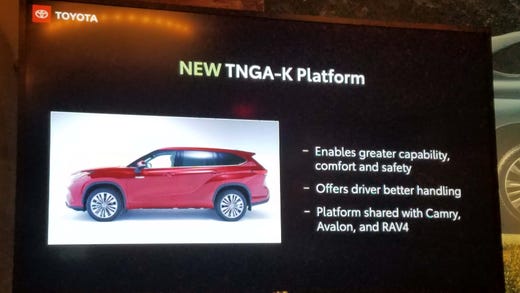 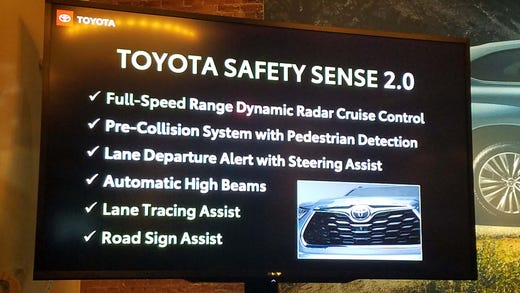 I am flying low in rural San Antonio, the three-row Toyota Highlander hybrid under my saddle begging me to go faster. I push deeper into a downhill right-hander, all four hooves scrambling for traction, then bury the throttle as electric torque kicks me out of the apex.

Hell has frozen over. Up is down. And three-row utes are fun. Once the most somnolent class in ute-dom, mainstream three-rows have come alive in the last year. Credit the handsome feature-rich Kia Telluride and Hyundai Palisade which have reset the bar as to what an affordable SUV should be. Applause, too, for the Ford Explorer ST which dared to make a hot-hatch out of a family bus. 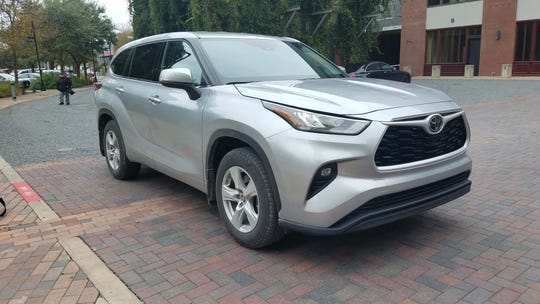 Value is the name of the game. For less than $40K the 2020 Toyota Highlander LE comes with a bucket-load of standard features. (Photo: Henry Payne, The Detroit News)

Once upon a time, rebel Toyota pioneered the unibody three-row SUV and defied truck-based convention. Now the aging Establishment, Highlander has to get crackin’. Where the Ford Explorer ST and Chevrolet Traverse High Country have decided to concentrate on big profits at the segment’s premium end, Toyota wants to fight in the value trenches.

Since that unibody revelation in 2001 the Toyota has been a fixture at the top of the three-row class: Reliable. Affordable. Efficient. Zzzzzzzz.

While its Toyota siblings turned hip ’n’ funky, Highlander became an old mare. I swear its tired, square jaw was growing whiskers. Then the family insisted it gets its own Extreme Makeover.

The new Highlander is different: It looks like a Toyota Supra sports car rear-ended a Tacoma pickup. Like the remade RAV4, the Highlander gets the Tacoma’s macho face, its grille-mouth turned down at the corners with determination. But aft of the A-pillars, the haunches swell with Supra-like blisters over the rear wheel-wells. It’s quite a transformation.

This being a family SUV, the makeup artists added tasteful chrome wings to the front grille (think Buick Enclave) and a proper large greenhouse opening for seven passengers. But make no mistake, this Toyota wants to be noticed. And that's in line with Chairman Akio Toyoda’s ultimatum to designers to think outside the box.

The Highlander joins other wild projects like the Lexus RX and the new Toyota  Supra. The architectural style that is more Frank Gehry than Frank Lloyd Wright. My taste is more Wright than Gehry, and I prefer the Kia Telluride’s simple, timeless lines. But I admire Toyota’s ambition to evoke emotion from sheet metal.

The inside is even funkier. Check out the guitar-neck dash design with the body of the guitar holding a 8.5- or 12.3-inch touchscreen display. Where the Telluride and Palisade borrow styling cues from Audi, Toyota has a personality all its own. 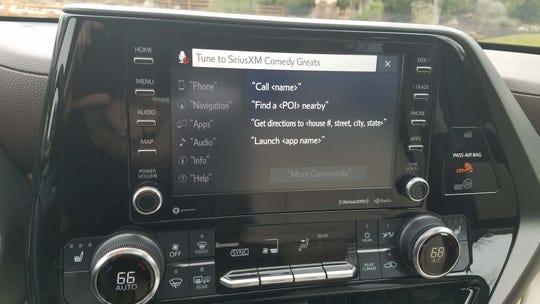 The voice commands on the 2020 Toyota Highlander are greatly improved.  (Photo: Henry Payne, The Detroit News)

Interior detail is obsessive, if not quite on par with Telluride and Palisade (see their clever USB ports in the seat backs). It’s a lesson for competitors like Ford and Chevy where you can literally see where corners were cut to save costs. Dash cubbies abound in Highlander for phones, change and potato chip bags. Third-row seat access is easy as popping the seat-top tab and sliding the second row forward.

The last-generation Highlander was smaller inside than competitors. That doesn’t change. An added 2.7 inches of wheelbase has been used entirely to expand cargo room, though it’s still shy of the big Koreans.

Having gotten your attention, the stylish Highlander wants to sit down and talk value.

I flogged the XLE grade all over Texas because that’s where Toyota expects half of its volume to come from. It’s easy to see why:

The XLE comes standard with automatic high-beams, automatic lane-keep, adaptive cruise-control and blind-spot assist. Asian brands have prioritized such features to meet millennial demand. Heck, my boomer wife won’t look at a car without these features.

Add all-wheel drive and the gas-powered 290-horse V-6 (mated to an eight-speed automatic) that I tried out came in at a cool $42,320. That’s nearly on par with a comparably equipped Telluride.

Toyota has baked hybrids into its lineup for two decades now, and the sippy Highlander hybrid that I tested is determined to impress. Telluride doesn’t offer a hybrid at all, and Ford prices its hybrid as a premium option available only at well over $50,000.

For just $1,200 more, my AWD XLE could be hybridized. The hybrid’s rear wheels are motivated by a stand-alone electric motor for an eye-popping 36 mpg. That’s a healthy 55% better than the V-6, which equated to nearly 600 miles of range for the hybrid.

As I drove, the Highlander hybrid really grew on me. Sure, upgrading to the $50,000-plus Platinum trim would add a panoramic roof, camera mirror and head-up display, but you get those features for just $47,000 in the V-6 Telluride.

Accelerating the hybrid out of a turn, I was reminded of the Ford Escape Sport Hybrid that I drove last fall. Like the Highlander, Ford also wants to make hybrid powertrains a high-volume choice, and the Escape's smooth operation — a 4-cylinder engine mated to a dynamic, continuously variable transmission — had me convinced.

In fact, the Highlander could learn a thing or two from the Escape. The Toyota’s drivetrain is similar — an electric-motor assisted, 2.5-liter 4-cylinder (replacing the old V-6) driven by a CVT. But the Ford’s CVT is nicely stepped like a cog transmission, whereas Highlander’s CVT drones on and on.

That incessant noise, however, doesn’t dull my enthusiasm for a 36 mpg three-row SUV. Family budgets rejoice. 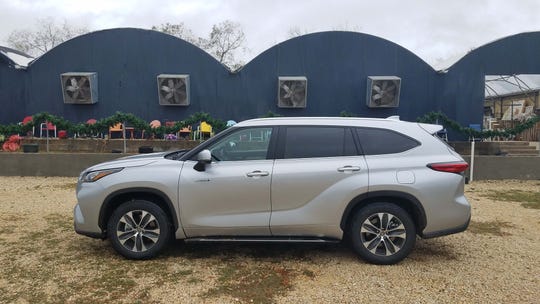 The Toyota’s smaller dimensions surely help it feel nimbler than its bigger Telluride/Escape/Chevy Traverse competitors, but credit Toyota’s new TNGA platform as well. With 15% better stiffness and upgraded suspension pieces, it joins the Camry sedan for the Most Improved Handling Award.

Much improved, too, is Toyota’s commitment to infotainment tech after a curious period when it pretended not to notice. Here at last is a Toyota touchscreen with Apple CarPlay, Android Auto and voice-recognition that actually listens to you.

Kia and Hyundai are setting the pace, but Highlander is game to keep up.

Lows: Smaller interior than competitors; no longer a snore to look at, but not everyone’s taste