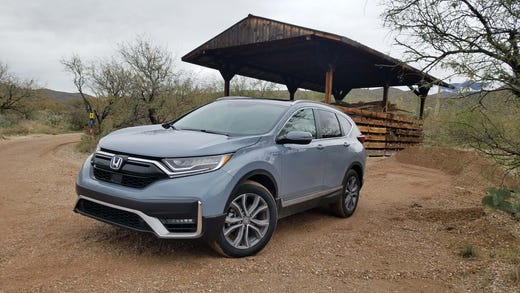 New for 2020, the Honda CR-V Hybrid is the best performing CR-V with 212 horsepower and excellent torque. Henry Payne, The Detroit News
Fullscreen 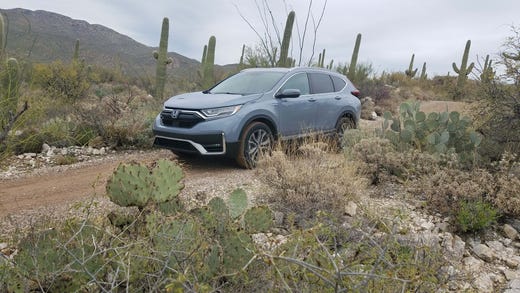 The 2020 Honda CR-V Hybrid gets 40 mpg in the city — but its standard AWD and 35 mpg highway allows for rural adventures, too. Henry Payne, The Detroit News
Fullscreen 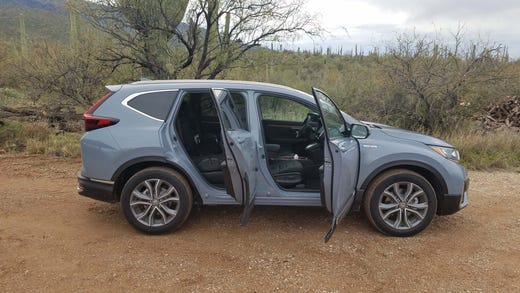 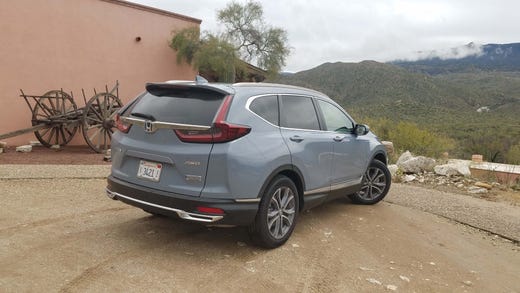 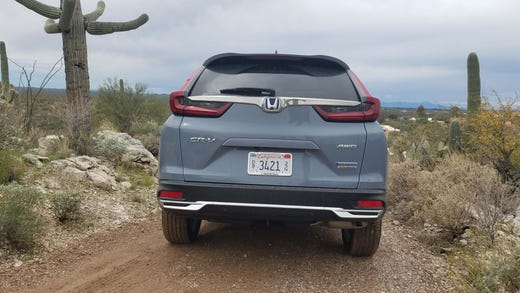 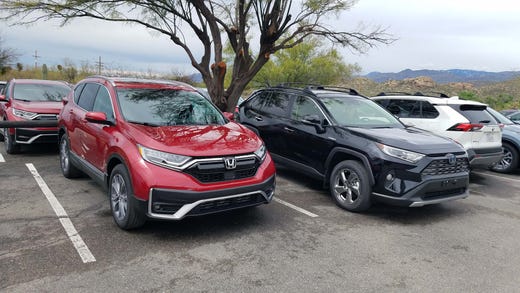 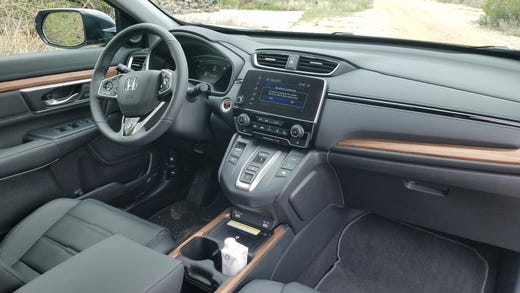 The interior of the 2020 Honda CR-V Hybrid is an easy place to get around with good storage, digital displays and smartphone connectivity. Henry Payne, The Detroit News
Fullscreen 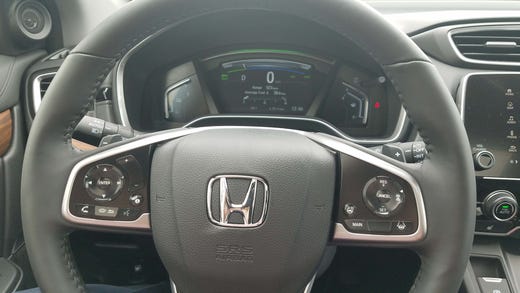 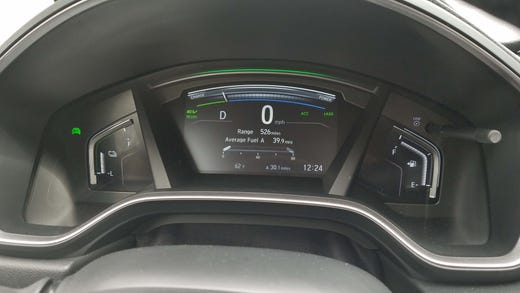 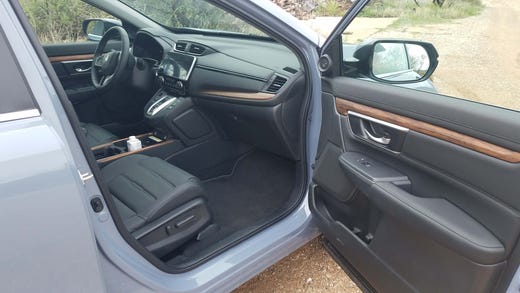 Come on in. The 2020 Honda CR-V Hybrid is available in leather. Henry Payne, The Detroit News
Fullscreen 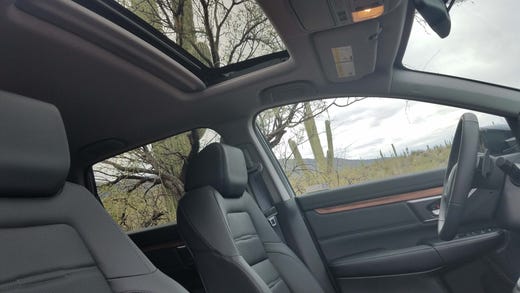 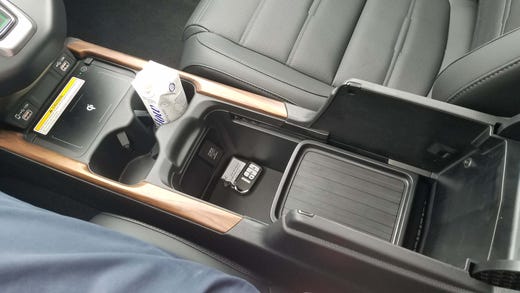 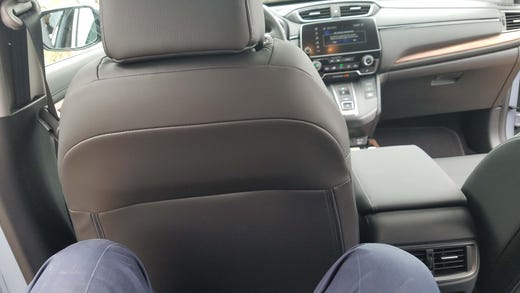 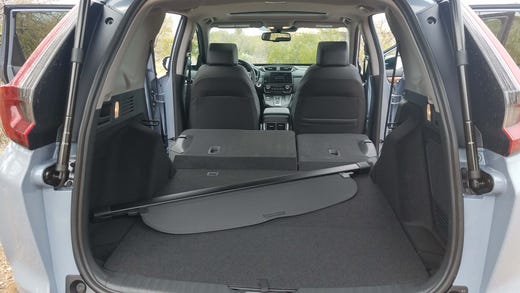 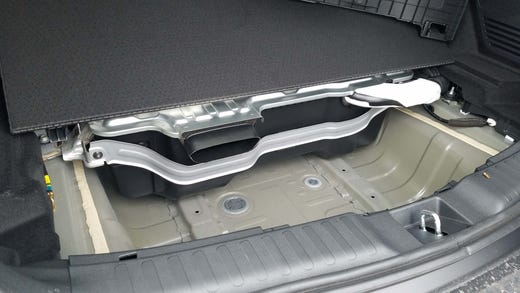 The 1.4 kWh battery for the 2020 Honda CR-V Hybrid is stored under the rear cargo area — taking up space where a spare tire would normally be. Henry Payne, The Detroit News
Fullscreen 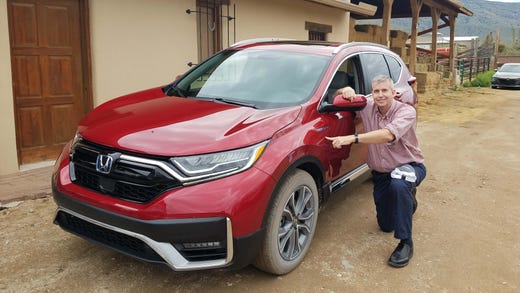 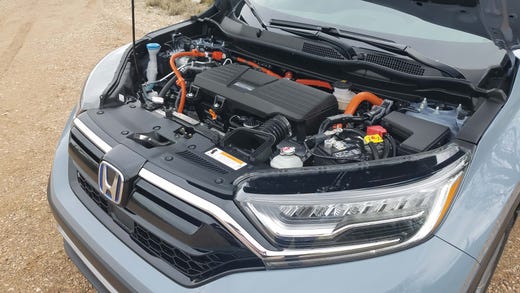 Under the hood of the 2020 Honda CR-V Hybrid is a 2.0-liter 4-cylinder engine mated to an AC motor. Henry Payne, The Detroit News
Fullscreen 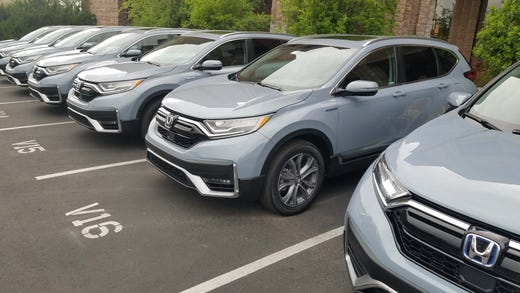 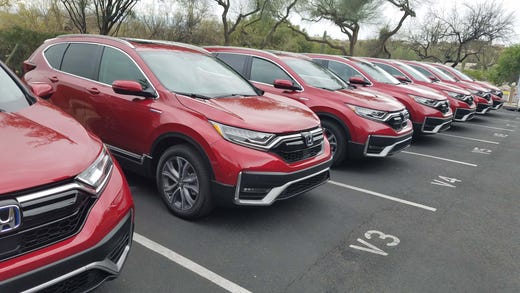 The 2020 Honda CR-V Hybrid can be had in Radiant Red Metallic. Henry Payne, The Detroit News
Fullscreen 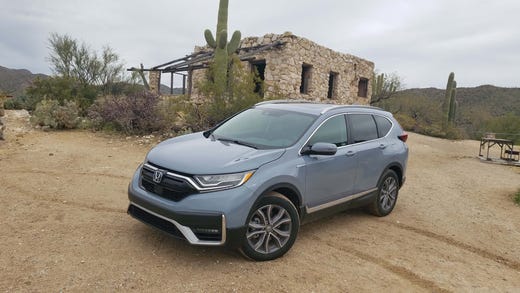 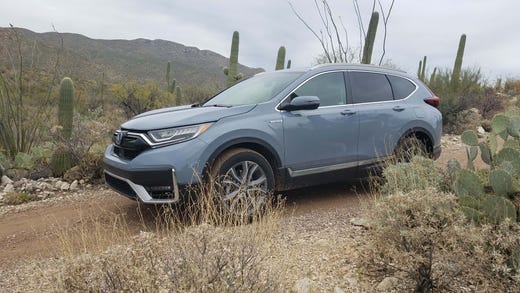 The 2020 Honda CR-V Hybrid isn't one of the most stylish CUVs in its class, but its updated fascia (shared with other CR-Vs) makes it easier to look at. Henry Payne, The Detroit News
Fullscreen

Shaped like a doorstop, it was optimized for 647-mile range — assuming a semi-truck didn’t run over it first as its 72 horses struggled to get up to interstate speeds. It came standard with a manual transmission. Its bicycle-thin rear tires were covered by fender slats to increase aerodynamics. It sold like granola in a candy shop. Not well.

How far hybrids have come. 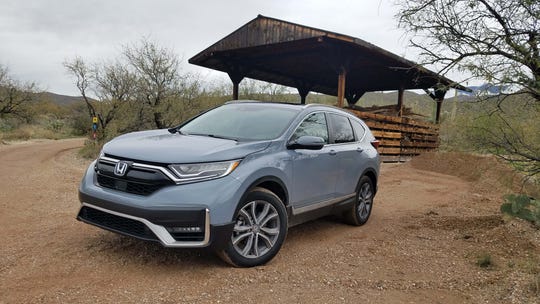 New for 2020, the Honda CR-V Hybrid is the best performing CR-V with 212 horsepower and excellent torque. (Photo: Henry Payne, The Detroit News)

Unlike the Insight, Honda may have a winner on its hands.

Customers had been more than happy with the CR-V’s two gas-powered options, gobbling up over 384,000 CR-Vs last year. But, this being the Age of the Nanny State, there is a regulatory advantage to Honda offering a hybrid option for its best-selling vehicle. So Honda ditched the second, 2.4-liter gas engine for the hybrid.

It helps make government electrification goals, not to mention Honda’s own internal goals. The idea of the Japanese automaker electrifying two-thirds of its product by 2030 seems absurd, until you realize its best-selling model will have batteries under the rear seat. 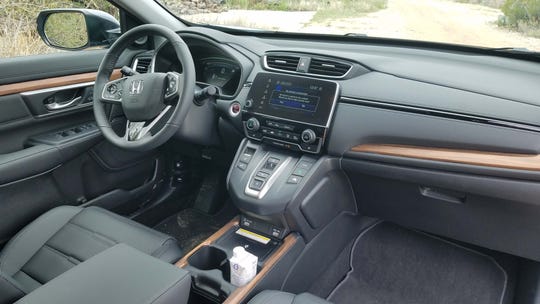 The interior of the 2020 Honda CR-V Hybrid is an easy place to get around with good storage, digital displays and smartphone connectivity. (Photo: Henry Payne, The Detroit News)

Unlike hybrids of the past, this greenie isn’t just for the faithful. Like similar offerings from Ford (Escape) and Toyota (RAV4), this nerd is superior to its gas-powered peer in almost every way.

As regular readers of this space know, I am a particular fan of the 2020 Escape ute, which Ford introduces in Sport trim at just $28,000. The Ford’s battery-assisted geekiness is buried under layers of hot black mascara makeup and cool tech displays. High mpgs never looked so good.

So, too, the CR-V Hybrid. The homely Honda can’t match class sexpots like the Escape and Mazda CX-5, but a remade lower facia and snazzy wheels are welcome upgrades. And the 2020 model gets attractive wardrobe colors like Radiant Red Metallic and a battleship gray called Sonic Gray Metallic.

The CR-V Hybrid’s real beauty is in the price.

Escape and RAV4 sticker prices balloon to over $30,000 with all-wheel drive, but that must-have feature for Michigan winters comes standard — along with everything else — on the Honda for under $29,000. That’s about $1,500 below its class competitors, and just $1,200 more than a comparable gas-fired CR-V.

Standard also is the CR-V hybrid’s 38 mpg fuel economy, 30% better than the 1.5-liter turbo-4 model. That means fewer stops at the gas pump — but it also means you’ll pay for that $1,200 premium in under five years. 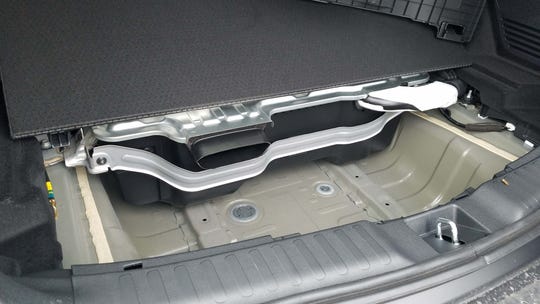 The 1.4 kWh battery for the 2020 Honda CR-V Hybrid is stored under the rear cargo area — taking up space where a spare tire would normally be. (Photo: Henry Payne, The Detroit News)

Given the hybrid’s 50% better fuel economy in urban areas — I averaged 40 mpg carving Tucson, Arizona’s urban roads — you might make it up quicker than that.

This is one cocky nerd.

Not only does it go farther on a gallon of gas than its gas-only brother, but it has more fun getting there. Honda had the audacity to set up a sand course for the hybrid that showed off its low-end torque.

With its direct-drive to the wheels (no transmission), the Honda provides instant torque without the groan of a continuously variable transmission that accompanies its Ford and RAV4 competitors. The Honda boasts 212 horsepower at the top end, though it’s shoutier getting there thanks to its 2.0-liter engine versus Ford’s bigger 2.5.

Honda has deep racing roots, and that DNA is felt even in the CR-V.

As I’ve noted, Ford has sewn a Sport badge on the Escape to suggest its lively personality. Don’t expect a Civic-like Type R model for the CR-V anytime soon (man, would that be a hoot) but I still enjoyed pushing the compact ute around town. Honda obsesses over the details and the hybrid’s bod is taut with a suspension to match. 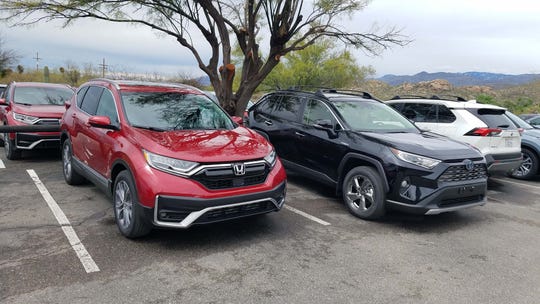 Like a nerd with thick glasses and thicker teeth braces, hybrids used to mean geeky outside and inside. But the CR-V Hybrid is thoroughly mainstream.

Open the door and you get Honda’s typical interior wonderfulness. In fact, pause and admire the CR-V’s rear doors: They are thoughtfully hinged to open almost 90 degrees to the B-pillar for easier ingress and egress.

The SUV’s console is nearly as clever with a roomy center console, thanks in part to its raised shifter island. There’s storage for cups and phone, and USB ports are forward-located so you can easily plug in your phone for turn-by-turn screen navigation. Exclusive to the hybrid is Acura’s nifty "trigger ignition” located high within easy reach.

That raised console was my only interior regret, as it sometimes bounced my knee. You’ll forgive them because Honda fussiness over passenger comfort is especially notable inside the console. 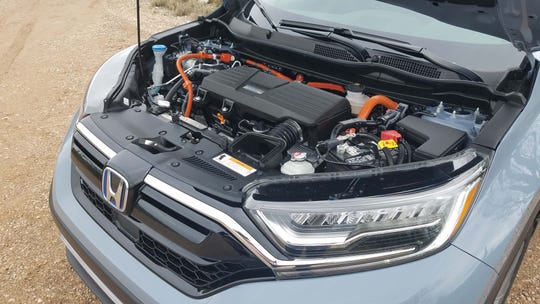 Under the hood of the 2020 Honda CR-V Hybrid is a 2.0-liter 4-cylinder engine mated to an AC motor.  (Photo: Henry Payne, The Detroit News)

CR-V’s three-row Pilot cousin has the best-in-class console with a pullback shade that allows purses to be stowed on top of the console spine — or entirely inside it. The CR-V, too, allows multiple configurations depending on what you're hauling.

Poke around under the cargo floor and you’ll see the only sign of hybrid sacrifice. To accommodate its lithium-ion battery, the CR-V’s standard spare tire has been replaced by a tire repair kit. Got a flat? The kit will fill the tire with air while also coating the interior with a puncture sealer. Hopefully, ahem, that sealer will last as far as the nearest service station.

Other oddities include steering-wheel paddles so that you can play with regenerative braking. And at low speeds the hybrid will emit an eerie, alien spacecraft sound to alert other earthlings that a quiet electric car is headed their way — as required by federal law.

It’s weird. But, hey, sometimes hybrids have to let out their inner nerd. 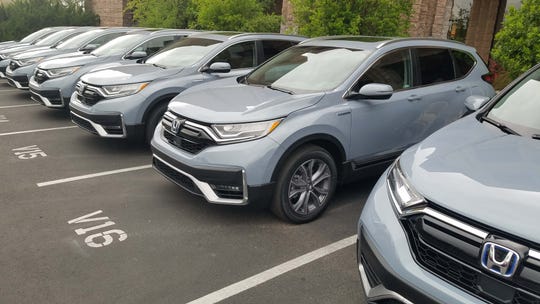