Payne: Turning back the clock in a '64 VW Beetle

Payne: Turning back the clock in a '64 VW Beetle 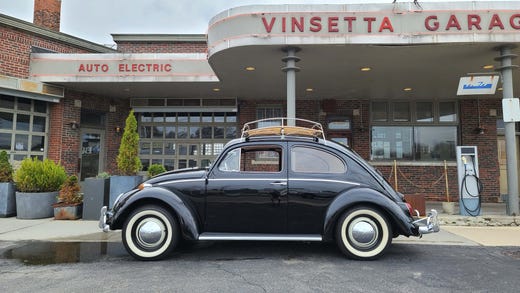 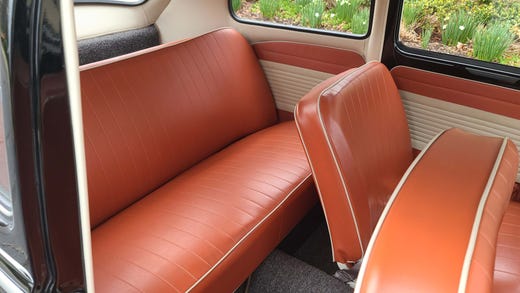 The interior of the 1964 VW Bug is tight with seating for two small individuals in the rear. A rectangular rear windshield replaced the original Bug's ovoid split window for better visibility. Henry Payne, The Detroit News
Fullscreen 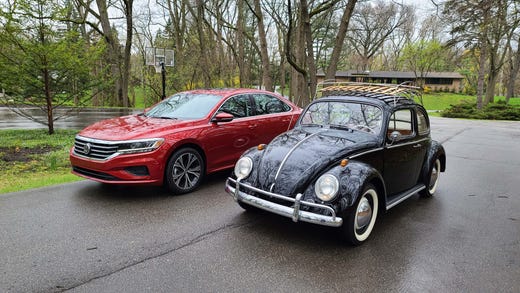 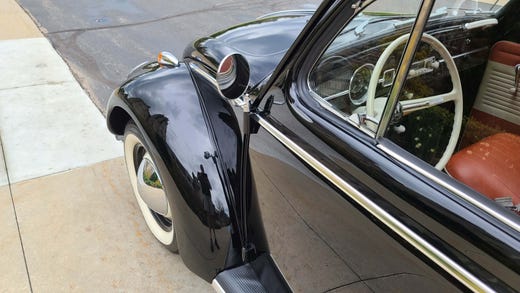 The 1964 VW Bug has a rear-view mirror on the driver's side, but not the passenger's side. No blind spot assist here. Henry Payne, The Detroit News
Fullscreen

Unlike modern cars, the 1964 VW Bug put its logo at the top of the hood, just in front of the upright windshield. Henry Payne, The Detroit News
Fullscreen 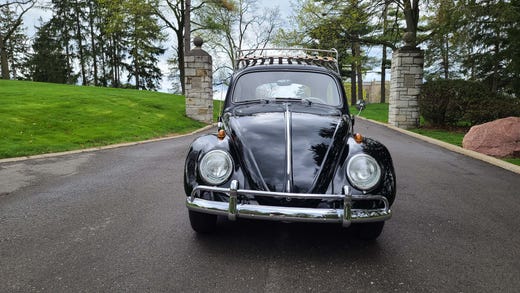 The unmistakable front end of the cute, 1964 VW Bug. Introduced to the U.S. in 1949, six out of 10 foreign cars sold in America in 1964 were Beetles. Henry Payne, The Detroit News
Fullscreen 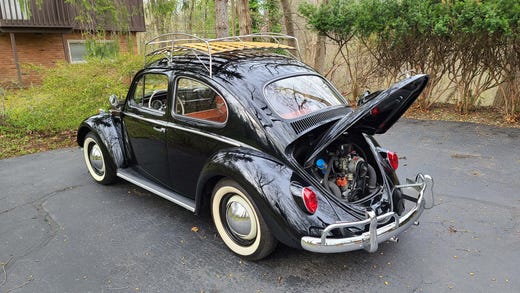 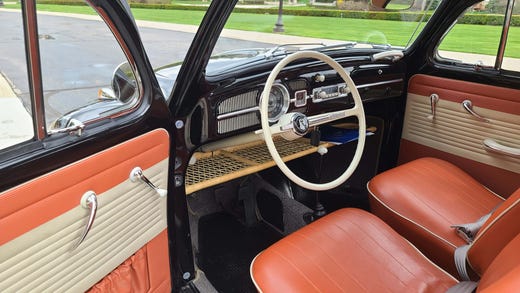 The interior of the 1964 VW Bug is spare, including roll-up windows, a radio and heat vent on the floor controlling heat from the engine. Henry Payne, The Detroit News
Fullscreen 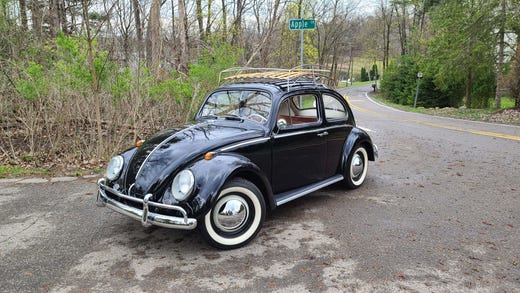 The 1964 VW Bug is rear-wheel drive and was developed by Ferdinand Porsche, and can be fun to drive through Michigan's twisty roads even with only 40 horsepower. Henry Payne, The Detroit News
Fullscreen

The year 1964 seems like yesterday. And a lifetime ago.

Its highlights still reverberate through our culture today. The Beatles first tour of America. The release of Mary Poppins, just remade in 2018. The 1964 Civil Rights Act. Carroll Shelby’s triumph over Ferrari at LeMans, setting in motion the war that would be Ford v Ferrari. The debut of the Ford Mustang.

Yet, I just drove a ’64 Volkswagen Beetle, and 1964 couldn’t seem more remote. The automobile has been utterly transformed in the last six decades.

Chugging across Oakland County’s twisty roads, the Bug felt heavy despite weighing only 1,728 pounds, about 1,200 pounds lighter than its modern successor, the Jetta. The Bug didn’t have power steering, now a standard item. That’s not the only thing.

A lot of that absent weight is lack of safety equipment and sound insulation, and my Beetle was LOUD. Its signature 40-horsepower, 1.2-liter flat-4 cylinder engine may be behind the rear wheels, but its warble was ever-present in the cockpit. I rowed all four gears with a stick shift as long as an oar protruding from the floorboards as I merged onto I-75. If you owned a Beetle in 1964, you learned to drive a manual — no automatic available.

No tachometer either — you had to shift by sound. Man, we have it easy today.

After what seemed an eternity I reached the Beetle’s top speed of ... 72. Just above the speed limit. I kept to the right lane as traffic whizzed by me at 80 mph, the Bug wandering unsteadily in its lane, the bubble roof buffeted by crosswinds. 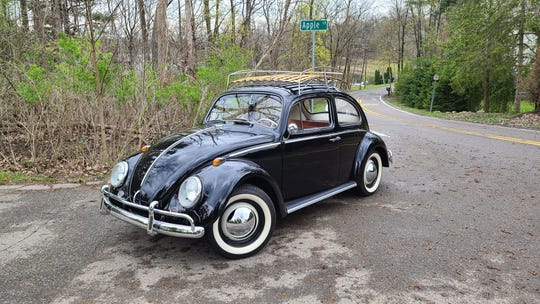 The 1964 VW Bug is rear-wheel-drive and was developed by Ferdinand Porsche, and can be fun to drive through Michigan's twisty roads despite just 40 horsepower. (Photo: Henry Payne, The Detroit News)

But it wasn’t nearly as tall as the vehicles around me, most of them Detroit Three pickups ... and something called SUVs, the best-selling vehicles in Michigan. You couldn’t find the term SUV in a ’64 dictionary. Webster’s didn’t adopt the term until 1986.

The first Beetles arrived for sale in the U.S. market in 1949. Two were sold. From those humble beginnings, the Bug would become on of the world’s all-time bestsellers and lay the foundation for what is today the world’s biggest-selling automaker, Volkswagen AG.

But the entry-level Bug — competing against the likes of the Chevy Corvair (also featuring a flat-cylinder, rear-engine design) — was hardly the best-selling vehicle in America. That crown belonged to the Chevy Impala, which sold nearly 900,000 models that year. In 1965, the Impala would set an all-time, single-year sales record of 1,074,925 units. 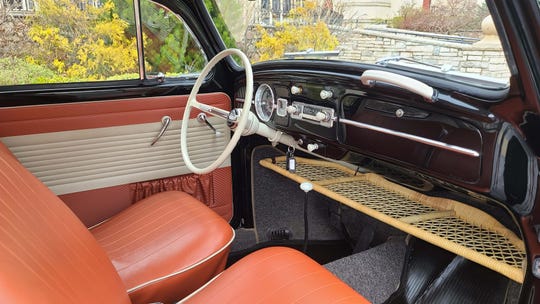 The dash of the 1964 VW Bug is a simple affair with one gauge for speed, a radio, and a four speed manual shifter on the floor. Controls were limited to windshield wipers. (Photo: Henry Payne, The Detroit News)

As I steered the Bug onto Woodward Avenue, I saw few Impalas. The nameplate expires this year. The top-selling non-pickup in the U.S. now is the Toyota RAV4 SUV, and the Impala’s production plant is being converted to make electric vehicles to compete against EV-maker Tesla Inc.

Parked in my garage next to the black Beetle was a black Tesla Model 3, which has made the term “frunk” fashionable for the 21st century. The term is derived from “front truck” — an added storage convenience made possible by EVs opening the front engine bay by storing their electric motor/battery drivetrain in the floor. Original Beetle owners know what a frunk is.

With its engine out back, I popped the Bug’s frunk and stuffed in my groceries — just behind the spare and on top of the gas tank. More storage abounds inside. Despite the tight interior, the two-door Bug provided a full shelf under the dashboard for additional sundries.

That dashboard is the most obvious difference between the ’64 Bug and today’s chariots. And I’m not just talking about the Tesla’s radical, tablet-dominated interior. Modern compacts are stuffed with electronics from Sirius XM to auto climate controls to Apple CarPlay and Android Auto navigation apps. 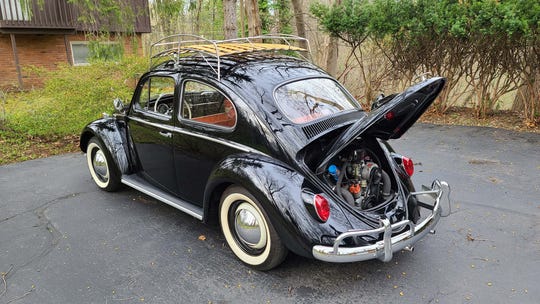 The Beetle’s dash was still innovative. The Bug featured sidentical glovebox cut-outs at each end of the dash so the steering wheel could be located on either side for sale abroad.

Glovebox aside, my ’64 Bug had a radio to hear the Beatles. Period. No traction control button. No head up display. No climate controls. Want to heat the cabin? A valve on the floor let in hot air from the engine bay. My ride had a sunroof option introduced for 1964.

My racing buddy Jim grew up in a ’62 Bug in New Hampshire. His family took it to the ski slopes in the wintertime — ski rack (now a collector’s item) mounted on the back while the weight of its engine over the rear wheels helped it gain traction through the snow.

That rear-wheel drive also made the Bug a surprisingly fun car to drive. With a well-engineered unibody chassis and rear-drive, I could naturally drift it around tight corners. I set up a mock autocross course in an Oakland County parking lot and had a blast (to the limits of my sliding around in the un-bolstered couch seat). Still, the car’s upright aerodynamics never made it a natural performance car despite its Herbie the Love Bug movie racing legend.

I grew up racing a 1966 Porsche 906 — with a comically giant steering wheel just like the Bug’s — from the same era. Like the Bug, the ’60s cemented Porsche’s international reputation as supreme engineering made it the brand to beat in 24-hour racing. Porsche still references its ’60s icons to sell today’s production cars.

There’s gold in these 1964 legends. One of the Shelby Daytona Le Mans cars that took it to Ferrari in ’64 has sold for $7.25 million at auction. 1964 was the last year of production for the Ferrari 250 GTO, a model that fetched $32 million at auction last decade. 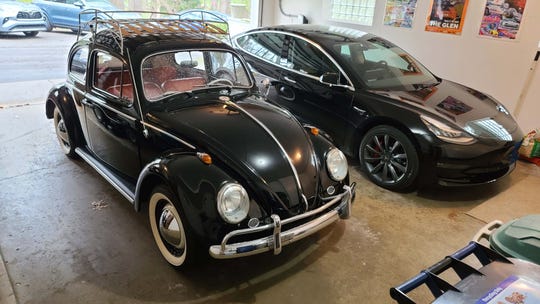 My ’64 V-dub might become a collector’s item as well.

Though the Bug was re-introduced in 1998 as a Jetta-based, front-engine "New Beetle" with modern amenities, the rear-drive original will forever be the brand’s touchstone. My Beetle was one of three meticulously restored to star as “Max” in VW’s 2009 “Das Auto” commercials. Speaking with a German accent into a microphone, Max the Beetle introduced the brand’s all-new Tiguan SUV to the U.S .market.

With its big peepers and beetle shape, everybody loves the Beetle. I got regular waves from passersby. Maybe the Beatles’ 1964 smash hit, “Can’t Buy Me Love,” had it wrong.