Whip-quick 2020 CT4-V is finally in the sub-compact class where it belongs. But it asks a lot of coin compared to more tech-savvy German competitors. 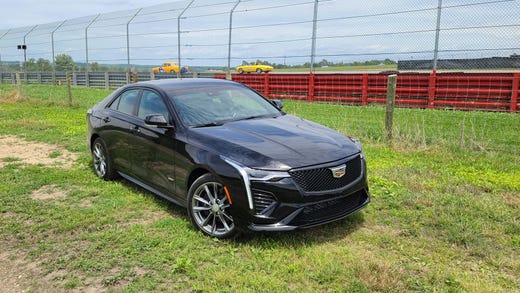 The 2020 Cadillac CT4-V is a new performance variant of the CT4 - which itself replaces the ATS sedan and debuts in the subcompact segment. Henry Payne, The Detroit News
Fullscreen 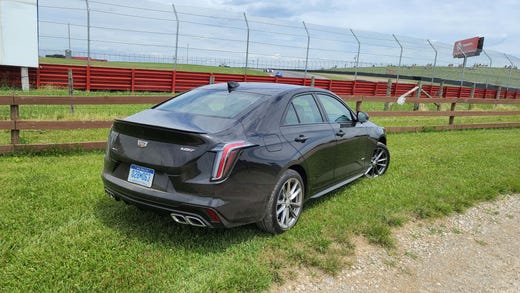 The unmistakable lines of the 2020 Cadillac CT4-V. The venue: The famous Keyhole turn at the Mid-Ohio race course. Henry Payne, The Detroit News
Fullscreen 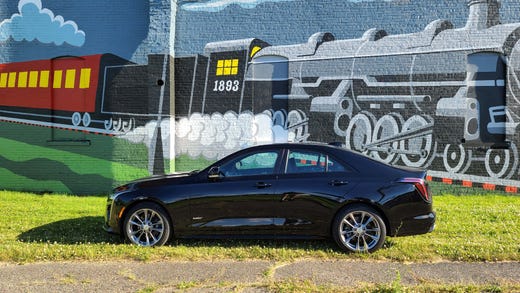 The all-wheel-drive, 2020 Cadillac CT4-V goes like a train from 0-60 in just 4.9 seconds. Henry Payne, The Detroit News
Fullscreen 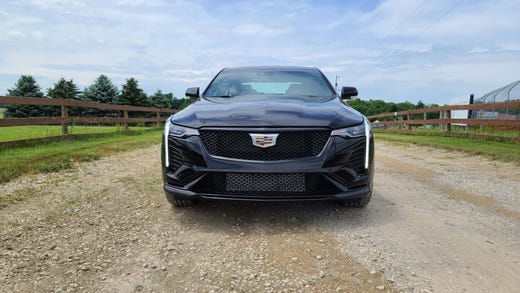 The distinctive face of the 2020 Cadillac CT4-V features headlight pushed to the corners and black trimmed grille. Henry Payne, The Detroit News
Fullscreen

The quad pipes give the 2020 Cadillac CT4-V away with its powerful, turbo-4 under the hood. Henry Payne, The Detroit News
Fullscreen 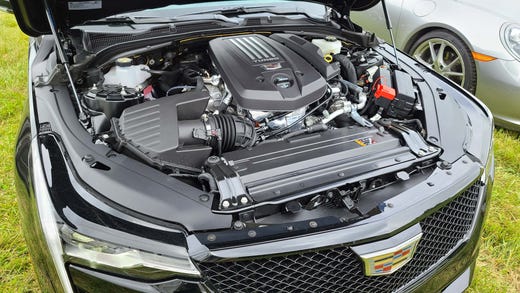 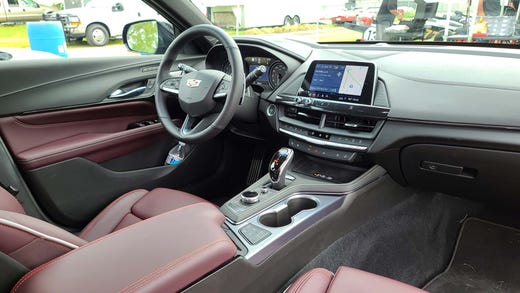 The 2020 Cadillac CT4-V gives you useful dials to operate the infotainment system - and two ways to access the console screen, a rotary dial or by touch. Henry Payne, The Detroit News
Fullscreen 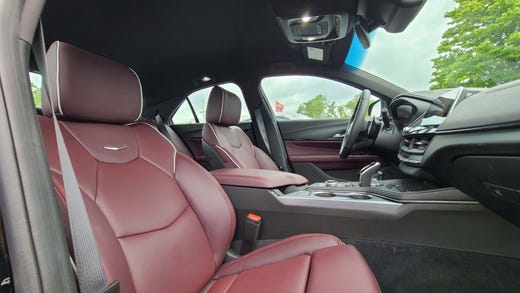 The seats of the 2020 Cadillac CT4-V are a nice place to spend time. Henry Payne, The Detroit News
Fullscreen 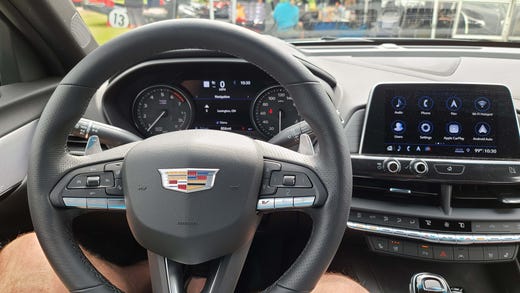 The 2020 Cadillac CT4-V is full of the latest tech - though its voice command system lags German competitors. Henry Payne, The Detroit News
Fullscreen 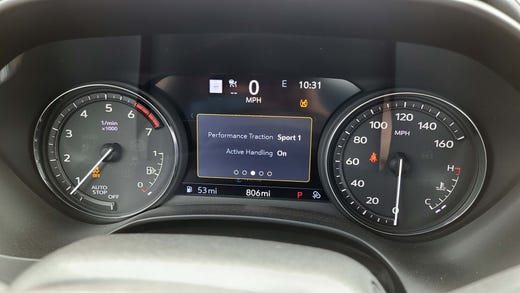 Unlike competitors, the 2020 Cadillac CT4-V sticks with analog gauges -but its configurable driving modes are state-of-the-art, shared with Corvette. Henry Payne, The Detroit News
Fullscreen 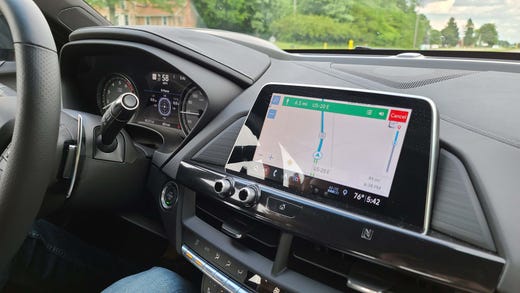 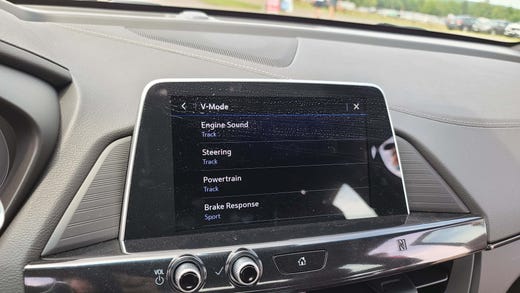 The sensational, one-button, personalized V-mode can be set in the 2020 Cadillac CT4-V's screen. Henry Payne, The Detroit News
Fullscreen 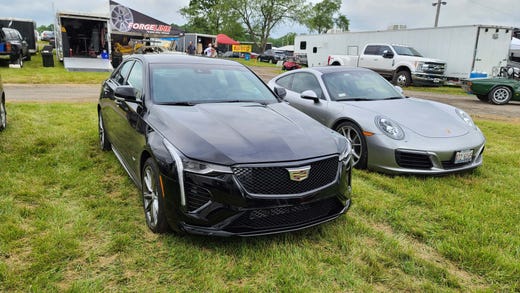 The sporty 2020 Cadillac CT4-V makes a nice duo with a Porsche 911. Both are supreme driver's cars. Henry Payne, The Detroit News
Fullscreen

The Cadillac ATS was the best-handling luxury sedan in the compact segment. Only the Alfa Romeo Giulia matched it with rear-wheel drive, scalpel-like handling and chiseled looks.

Yet buyers ignored it.

So Cadillac has rebadged ATS as the CT4, added a V-performance version and dropped it into the subcompact sedan segment where its tight rear legroom isn’t a liability.

I took the 2020 CT4-V to Ohio’s racing mecca, Mid-Ohio race track, to see if would get any attention.

“I love it when you drive up in this car. It’s cool-looking,” said a Mid-Ohio gate attendant as I entered the track Saturday morning for qualifying. 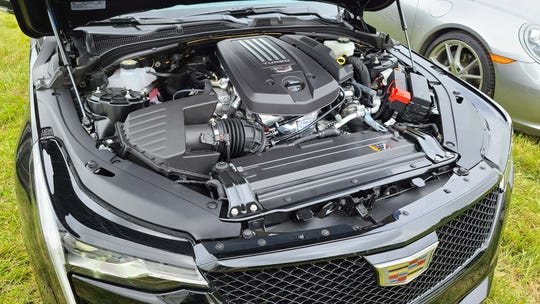 I was racing my own 1990 Lola race car at the annual SVRA Vintage Grand Prix of Mid-Ohio, and I had driven the CT4-V the three hours from Detroit to Lexington, Ohio. For four days, the CT4-V and I came and went from the racing paddock and got plenty of comments. Mostly positive.

The CT4-V performance badge is, like everything but the chassis, new for 2021. The V allows Caddy to compete against the likes of the Audi S3 and the BMW M235i — performance upgrades to standard subcompact models — but without breaking the bank like uber-high performance Audi RS3 and BMW M2 models (Don’t worry speed freaks, the CT4 will eventually get a steroid-fed, $70,000, twin-turbocharged V-6 animal, too). 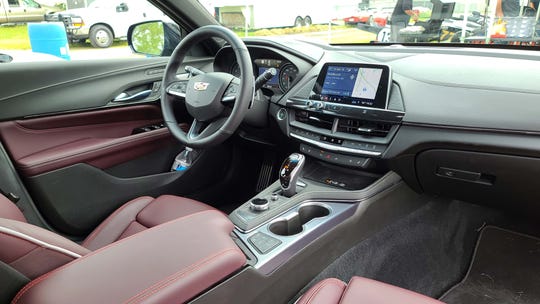 The 2020 Cadillac CT4-V gives you useful dials to operate the infotainment system - and two ways to access the console screen, a rotary dial or by touch. (Photo: Henry Payne, The Detroit News)

The sticker price caused pause among my pals. Can Cadillac support that kind of brand premium? Well, no. The CT4-V model should be priced below its German competitors in order to give it a fighting chance against stronger brands.

It does, however, more than match them for performance.

With best-in-class 325 horsepower and face-flattening 380 pound-feet of torque married to a lightning-quick 10-speed transmission, the V in CT4-V stands for “very fun to drive.” Especially on Lexington’s roller-coaster roads.

Like the race track that has made Mid-Ohio an international destination for racers from IndyCar to Trans Am to vintage racing, Lexington’s roads are a twisted delight. Exit flat-as-a-board, four-lane Ohio Route 30, take a two-lane south toward the Clear Fork Reservoir and the driving experience is suddenly transformed. Undulating straightaways meet blind crests that suddenly fall away into sharp downhill turns on the other side. 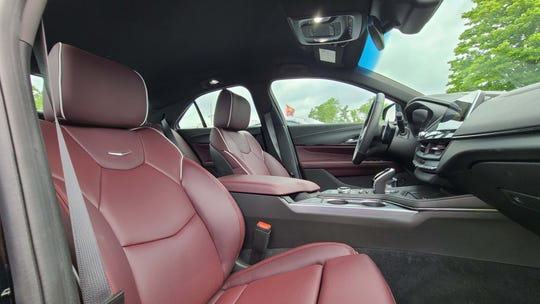 The seats of the 2020 Cadillac CT4-V are a nice place to spend time. (Photo: Henry Payne, The Detroit News)

My athletic CT4-V was made for this. It never put a wheel wrong as I gulped country terrain.

Adding to its capabilities is V-mode, a button on the steering wheel — ripped right out of the mid-engine Corvette (which calls the feature Z-mode) — enabling me to pre-program the chassis settings so they could be changed in an instant from Route 30 cruiser to backroads cheetah. Steering: Track. Drivetrain: Track. Brakes: Sport. A sub-menu accessed by turning off traction control allowed even more electronic tweaking of the suspension and engine systems.

My friend and fellow Lola racer Mark was as addicted to V-mode as I was. He punched the button and the steering noticeably firmed, the Magneride shocks firmed, and the engine note dropped a couple octaves. Hard on the throttle out of a 90-degree turn and the transmission cracked off shifts — BRAP BRAP BRAP — while the torque pinned us in our seats. 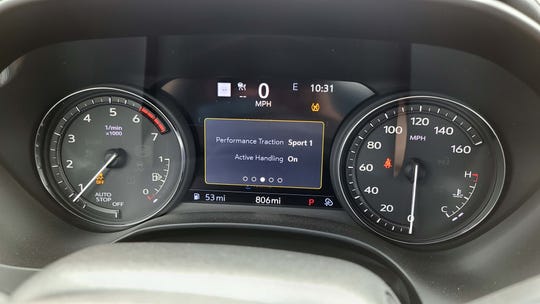 Unlike competitors, the 2020 Cadillac CT4-V sticks with analog gauges -but its configurable driving modes are state-of-the-art, shared with Corvette. (Photo: Henry Payne, The Detroit News)

Want more? Try launch control, another benefit of Corvette electronics: Toggle to Track mode. Hold the brake at a stoplight. Bury the throttle. Release the brake. The CT4-V rockets to 60 mph in just 4.9 seconds, nearly a full second better than the last-generation ATS equipped with a 325-horse V-6 (though the CT4-V is still shy of the BMW M235i’s 4.7 seconds).

Not as thrilling, though, is the turbo-four engine note, which suffers compared to the old six. Federal nannies are strangling multi-cylinder engines these days (on their way to mandating we all buy Tesla-like EVs), but six-cylinders are still available at this price point — most notably in the rabid Toyota GR Supra that I recently flogged through northern Michigan. A six will eventually be available in the top-line CT4 but it’ll cost ya.

The four-banger’s growl gets digital enhancement inside the CT4 because the thing is so danged quiet.

The cockpit was a pleasant place to be on my trip down to Mid-Ohio. The CT4 is all grown up from its too geeky ATS predecessor. The console has been remade with a touchscreen tablet infotainment display and multiple friendly control points including dial control-knobs for climate controls and a rotary dial to access the screen for those who find touchscreens distracting. Throw in Caddy’s head-up display and it’s all quite useful. 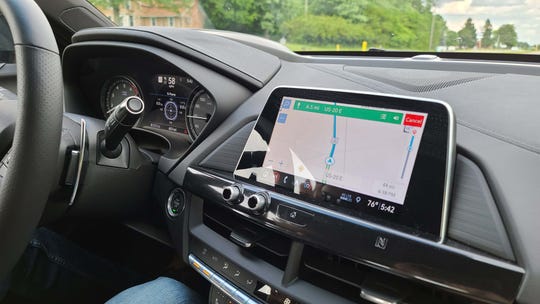 It will all appeal to my Caddy owner friends who have gone noticeably gray dealing with previous, maddening, too-clever haptic-touch systems.

But compared to its competition, the Cadillac noticeably lags in tech.

The voice-command systems of the BMW and Mercedes CLA are noticeably more refined, as are their crisp digital instrument displays. The Audi wows with is configurable instrument display. And then there’s Tesla with its game-changing, minimalist design. It’s a murderer’s row for the relatively average Cadillac interior to face.

And puts a lot of pressure on the rear-wheel drive CT4-V platform. 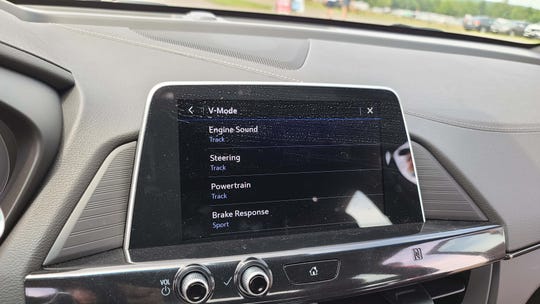 The sensational, one-button, personalized V-mode can be set in the 2020 Cadillac CT4-V's screen. (Photo: Henry Payne, The Detroit News)

It’s the driver’s car of the lot, no doubt. Indeed, I’d be tempted to ditch the V-series AWD option were the winters in Michigan not so brutal. The rear-wheel drive system is 130 pounds lighter, which makes CT4 even more athletic. More tossable.

Now in its proper subcompact segment, the rear seat is no longer annoyingly tight. It’s competitive in its segment, and malleable enough to fit my 6-foot-5 stork legs. The exterior design is elegant — it looked like its belonged next to Mark’s Porsche 911 — and the geeky interior console a distant memory.

But there’s a new American kid on the block, Tesla, that’s turning heads now. And those Germans just won’t go away. Keep working at it CT4. V is for “very nearly there.” 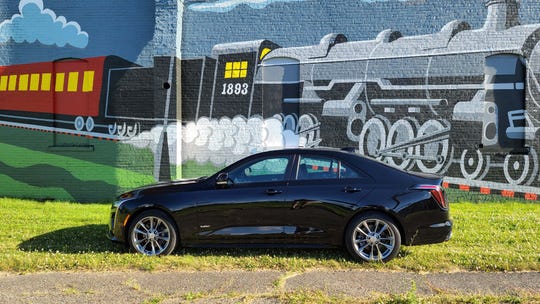