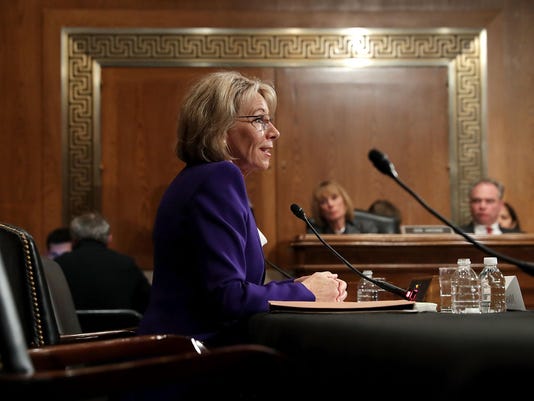 Betsy DeVos, President-elect Donald Trump's pick to be the next Secretary of Education, testifies during her confirmation hearing before the Senate Health, Education, Labor and Pensions Committee in the Dirksen Senate Office Building on Capitol Hill on Tuesday.(Photo: Chip Somodevilla / Getty Images)

When I hear Betsy DeVos talk about how families shouldn’t be limited by income or ZIP code in making school decisions, it hits home.

The west Michigan native made the case for school choice and great public schools during her Senate testimony Tuesday, which lasted three and a half hours. DeVos is President-elect Donald Trump’s nominee to head the Department of Education.

“Parents no longer believe that a one-size-fits-all model of learning meets the needs of every child, and they know other options exist, whether magnet, virtual, charter, home, religious or any combination thereof,” DeVos told the committee. “Yet, too many parents are denied access to the full range of options.”

DeVos’ work has centered on promoting these kinds of opportunities for families — especially those who are poor.

It could have made a real difference for me when I was growing up in Oregon. My parents didn’t believe our local public school was a good fit, yet they couldn’t afford a private school. That didn’t leave many options.

Thirty years later, it’s refreshing to see the choices my Michigan friends have for their kids. Many of them are sending their children to charter schools — an alternative that DeVos helped bring about in this state.

“Betsy DeVos is on our children’s side,” said Alexander, who was education secretary under George H.W. Bush.

And even though teachers unions have painted DeVos as a public school hater, DeVos talked about her work mentoring students at Grand Rapids Public Schools. In several interviews, Superintendent Teresa Weatherall-Neal has confirmed DeVos’ support.

While expanding choice and promoting accountability define DeVos’ work, she told the committee that she knows she can’t force states to adopt such measures. Rather, she is a strong supporter of giving states even more leeway to set their education agenda. That’s in line with the latest version of the federal education law.

Overall, DeVos kept her cool despite grandstanding by Democratic senators. Minnesota Sen. Al Franken seemed pleased when he caught her off guard with questions about test proficiency and growth.

Not surprisingly, Vermont Sen. Bernie Sanders tried to sell DeVos on free college tuition (something even Hillary Clinton was reluctant to do), and Massachusetts Sen. Elizabeth Warren wanted her to promise to uphold rules that the Obama administration has used to strangle for-profit colleges.

Several senators, including Washington state’s Patty Murray, tried to force DeVos into backing the Education Department’s efforts to fight campus sexual assault, under the guise of Title IX — the federal law that prohibits sexual discrimination. The Democrats didn’t seem interested in her views on upholding due process for the accused.

DeVos held her own on these topics and made it clear she intends to take the department in a different direction.

And she did an excellent job defending her philosophy of education: “For me, it’s simple: Trust parents and believe in our children.”