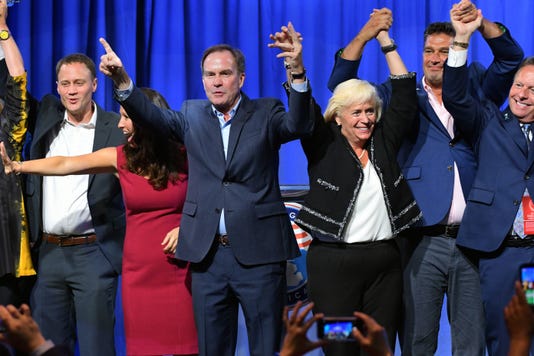 Is Donald Trump a boon or detriment to Republicans seeking to win in the midterms?

The president definitely played a role at the Michigan GOP nominating convention in Lansing Saturday -- but to mixed results. Trump merchandise was on display, and the state party marketed a new slogan, "results not resistance," a reference to the blue wave growing in response to the president’s antics and policies.

When Republican gubernatorial candidate Attorney General Bill Schuette promised to help re-elect Trump in 2020, he got plenty of cheers from the crowd. Trump’s job approval by Republicans remains high at 87 percent, according to the latest Gallup ranking.

Although several candidates tried to capitalize on Trump’s popularity among the base, the delegates who voted on key races on the November ballot, including attorney general, secretary of state and state education boards, seemed to put more stake on individual campaigns than purported loyalty to the president.

Michigan Trump Republicans, a group that advocates for the president yet isn’t authorized by the administration, endorsed several candidates ahead of the convention who will “have the president’s back.”

House Speaker Tom Leonard had the Trump Republicans endorsement and did win the attorney general nomination over state Sen. Tonya Schuitmaker. Yet Joseph Guzman, who also had that endorsement and served as one of Trump’s Michigan campaign co-chairs, lost the secretary of state nomination to Mary Treder Lang.

“Trump has historic popularity among the truest of true believers — the Republican partisans who go to these confabs — both in Michigan and nationally,” says GOP consultant Dennis Lennox. “As a result, you're seeing a lot of opportunists use the president's name when they either didn't support him or they haven't been endorsed by him.”

Both Epstein and James made appearances at the state convention.

Despite the outward appearance of Trump support, there was plenty of unease among long-term Republicans who are sick of the drama surrounding his presidency and genuinely concerned about strong Democratic turnout this fall.

Republicans who appear further down the ballot, such as education board and Supreme Court candidates, are especially worried about the consequences of a blue wave and straight-ticket Democratic votes.

November will be a true test of the strength of Trump’s brand, and from the mood at the state convention, Republicans will have to hustle the next few months to excite voters.