If you need an example of how partisan things have become in our nation’s politics, look no further than what’s playing out in West Michigan

If you need an example of how partisan things have become in our nation’s politics, look no further than what’s playing out in West Michigan. The region is lacking key federal law enforcement officials, thanks to the state’s two Democratic U.S. senators.

Sens. Debbie Stabenow and Gary Peters have effectively blocked President Donald Trump’s nominee for U.S. attorney for the Western District, Tom Leonard. It’s an important job, and would make him the top federal prosecutor for half of Michigan. The office has gone without a Senate-confirmed replacement since early 2017.

Leonard, a DeWitt Republican, is a former speaker of the Michigan House and made a run for state attorney general in 2018, narrowly losing to Dana Nessel. He previously worked in the Genesee County Prosecutor’s Office. He’s highly qualified for the post.

Trump initially floated his intent to nominate Leonard in August, following through with a formal nomination in September.

That’s because Senate rules give home-state senators leeway to nix a nomination by refusing to sign off with “blue slips.”

Stabenow and Peters never had any intention of backing Leonard. Stabenow has made it clear she outright opposes him, while Peters is more concerned over the process of his nomination and his political experience.

What’s most frustrating to Leonard is that he says he reached out to both senators’ offices, and requested meetings with them several times. Those meetings never happened, and the senators inaction dragged out the process through the end of year.

“It’s been so bizarre,” says Leonard. “I would love to sit down with them and discuss my vision and qualifications, but they won’t take a meeting.”

The new year means Leonard’s nomination is effectively dead, and Trump would have to re-nominate him to get the process started again.

It's a disservice to millions of Michiganians to stall the process. Leonard believes that an acting U.S. attorney’s hands are tied and doesn’t have the same accountability and ability to be tough that comes with Senate approval. 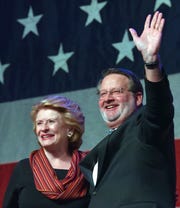 As Eric Holder, former attorney general under President Obama, observed on a visit last year to Michigan, when he found out the position was still unfilled: “This is nuts.”

Peters’ office points blame at the Trump administration for its handling of the nomination, arguing Trump didn’t nominate anyone for more than two years. And when he did, the president didn’t first consult Peters or Stabenow.

Trump did run the names of now-Michigan Eastern District Court Judge Stephanie Dawkins Davis and Matthew Schneider, current U.S. attorney for Michigan’s Eastern District, by Peters ahead of nomination, and Peters supported those candidates — albeit after some political wrangling.

In addition to the lack of a U.S. attorney, the Western District also has vacancies on its judicial bench, as well as a U.S. Marshal post, which all require Senate approval.

In these Michigan cases, Stabenow and Peters are withholding support, whether pre- or post-nomination. They’ve made it known they don’t like the judicial candidate, thus the White House hasn’t made an official nomination. They say they won’t commit to supporting a candidate until he or she is nominated. Yet when the Trump administration did make a formal nomination, as in the case of Leonard, they still wouldn’t cooperate.

Bolger says the Senate could change the blue-slip rules, as it has done with federal appeals court nominees like Eric Miller out of Washington State. He was confirmed to the 9th U.S. Circuit Court of Appeals, despite opposition from his home state senators.

Senate Judiciary Committee Chair Lindsey Graham, R-South Carolina, is scheduled to stump in Michigan for Republican Senate candidate John James later this month, and you can be sure he’ll make the case for why Michigan needs some balance in its Senate representation.

In the meantime, Leonard says, “I stand willing to serve.”