Handmade: Grandmother knits clothes to scale for own Barbie dolls

Handmade: Grandmother knits clothes to scale for own Barbie dolls 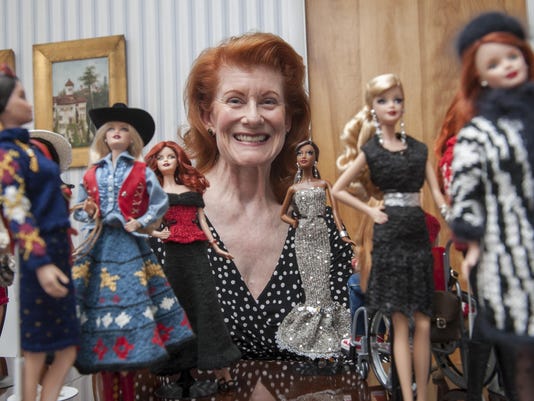 Maribeth Regnier and some of the Barbie dolls that she has created handmade outfits for.(Photo: David Guralnick / The Detroit News)Buy Photo

Maribeth Regnier’s granddaughter, Lorna Regnier, had no idea the impact she would have on her grandmother’s life the day she asked, “Grandma, can you make some doll clothes for my Barbie dolls?” Regnier, who at the time had been knitting for 50 years, says she responded to the 5-year-old by saying, “I can absolutely make clothes for your dolls!”

That was six years ago, and although her granddaughter no longer plays with dolls, the Brighton resident still knits tiny outfits to scale for Barbies, but now she does it for herself and shares them with others by doing “fashion doll exhibits” in public libraries, at knitting events, craft shows, retirement communities, tea parties at community centers, churches and even the Howell Opera House. She calls her display the “Oh, You Beautiful Doll, Doll Show, Handknits by Maribeth Regnier.”

“My show features 152 different dolls in pristine condition in hand-knitted designs. The dolls are ethnically diverse and are shown in collections,” she says. And to do the shows, she and her husband, Joseph, had to buy a minivan to accommodate all their little passengers, along with risers used for the display, which takes an hour to set up and an hour to break down.

How did she come up with the idea for the shows? She says, “About three or four years ago, I had a bunch of dolls done and a neighbor came over and said, ‘You should show these.’ She went over to the Brighton Library and they gave me the big display case for three weeks. The response was wild! People had to wait to take their turn to get close enough to see the dolls.”

When Regnier first began creating fine knitwear for Barbies, she says, “I started to knit the patterns I had from years ago that were ill-fitting, and the needle sizes were too big. I thought, ‘Can we do better than this?’ So, I went online and researched (knitted) fashion doll patterns and found some great sites where they were available, and I started to purchase them,” she explains. “I probably have the largest collection of knitted fashion doll clothes patterns out there.”

She adds, “Because the knitting is so small, you can buy expensive yarn because you’re using so little. A lot of the items I’m making now, I’m using embroidery thread, and it has a nice sheen. I use size 0-05 needles.”

Regnier, who now designs some of the outfits, doesn’t knit for “play” Barbies. She says, “I get the collector dolls. I usually buy them (online) from the Barbie Collector, and I get them from eBay. I have dolls that are quite old, but they’re new. She once paid over $100 for a Barbie that came with a doll size Coach purse, but she usually pays around $50 each.

She attributes the success of her shows to the fact that they appeal to doll collectors, knitters and fashionistas. She sees them as “an add-on to an event,” like a mother/daughter or ladies gathering. She says, “The idea is to inform (about patterns, intarsia designs, etc.), of course, but also entertain.” She recently did a show for the Woolgathers Guild at the Salvation Army in Plymouth.

Despite the long hours she puts into her growing project, Regnier sees it all as “just a hobby,” and chooses to not sell any of the dolls. She says, “It’s a labor of love — and response has been incredible!”

Detroit News Columnist Jocelynn Brown is a longtime Metro Detroit crafter. You can reach her at (313) 222-2150 or jbrown@detroitnews.com.