Last year, working people all over this country banded together to demand a fair share of the profits they earn for their employers, Bieber writes.

For decades now, too many of the benefits produced by our country have flowed to the 1%, at the expense of the rest of us.

But outside of Election Day, working people have other tremendous opportunities to use their collective power to help build an economy that works for everyone. 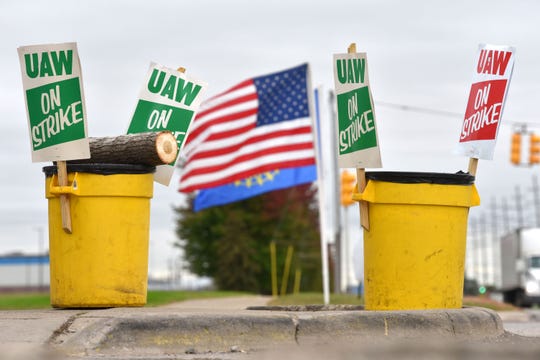 The U.S. and UAW flags blow in the wind in behind UAW On Strike picket signs at the GM Warren Transmission Operations plant before picketers hear there may be a tentative deal to end the strike. (Photo: Todd McInturf, The Detroit News)

Last year was a historic year for working people all over this country, as they banded together to demand a fair share of the profits they earn for their employers. The GM strike, the Chicago teacher strike and many other collective actions across the country showed that unions deliver for our members in the form of tangible benefits like increased pay, better benefits and long-term job security.

And those workers who aren’t fortunate enough to be covered by a collective bargaining agreement are recognizing this, leading to a surge in organizing campaigns in new and emerging sectors, and in legacy industries like journalism, where technology and the internet is causing massive layoffs and wreaking havoc for those who still have jobs.

In Oregon, a cannabis retail chain ratified a collective bargaining agreement with UFCW Local 555 two and a half weeks after opening. The agreement set fair wages for shop employees, provides health and pension benefits, and ensures holiday pay, paid time off, and workplace safety protections. These kinds of basic protections are critical in this emerging and growing industry to ensure workers have a safe, fair, and dignified workplace.

Drivers for Uber, Lyft, and other apps also won a historic pay floor in New York City. Too many of these drivers earned poverty-level wages, saw no benefits, and were subject to arbitrary app fees that cut into their earnings. In 2017, Uber added in-app tipping as an option nationwide in response to an Independent Drivers Guild campaign. And this year, drivers for Uber and other apps won a guarantee that they would be able to earn at least the New York City minimum wage while on the job, raising driver pay by over $9,600 per year.

Media members also saw long-overdue gains. The slow breakdown of the media industry is a tidy expression of the broader economy’s issues, as workers are seeing less and less while gains flow to those at the top, and thousands of jobs are cut or outsourced. This year, workers at BuzzFeed, the Dodo, Slate, Peacock Productions, VICE Media, Pitchfork and Ars Technica, Gimlet Media, WBUR, Gizmodo Media Group, The Morning Call, Quartz, Vox Media, KCRW, New York Media, Law360, and Onion Inc. all voted to unionize or reached collective bargaining agreements with their employers.

The gains that labor unions have seen, and the gains that working people have won, are all about building towards the future and building a new American economy: one that works for the people. We will continue to fight for this better future in 2020, and look forward to more and more working folks coming together and joining in union to realize their collective power in moving the workers’ agenda forward.