Dr. Malaz Alatassi and seven partners have raised $1.6 million to create a refuge for Syrian families in Pontiac

Dr. Malaz Alatassi stands outside the former Franklin Elementary School in Pontiac. Alatassi and a group of investors have invested in building housing for Syrian refugees. He remains hopeful even while City and County officials are now opposed to the project.(Photo: Max Ortiz / The Detroit News)Buy Photo

No children play outside Franklin Elementary School. Since its doors shut seven years ago, the school has been vandalized, stripped of copper wiring and plumbing, and littered with trash. On the south side of the property, a cyclone fence, rusted but stalwart, marks the Pontiac boundary with Bloomfield Township.

“Houses on this side of the fence cost $30,000. A few blocks away, they can be a million dollars,” says Dr. Malaz Alatassi, who with seven partners has raised $1.6 million to create a place of refuge in this neighborhood for families from his Syrian homeland. Most of his partners are physicians, as he is. They are immigrants living the American dream on the Bloomfield side of the fence, still connected to war-ravaged Syria by family ties and deep memory.

A month ago, their ambitious idea attracted little attention: to rehabilitate the school they purchased, along with another, for $850,000, as a secular community center and to build 120 new, inexpensive homes on scattered lots they bought for $250 each from Oakland County. “It is not an investment for us,” Alatassi says, in an interview in the school parking lot. “It is a way for us to help.” 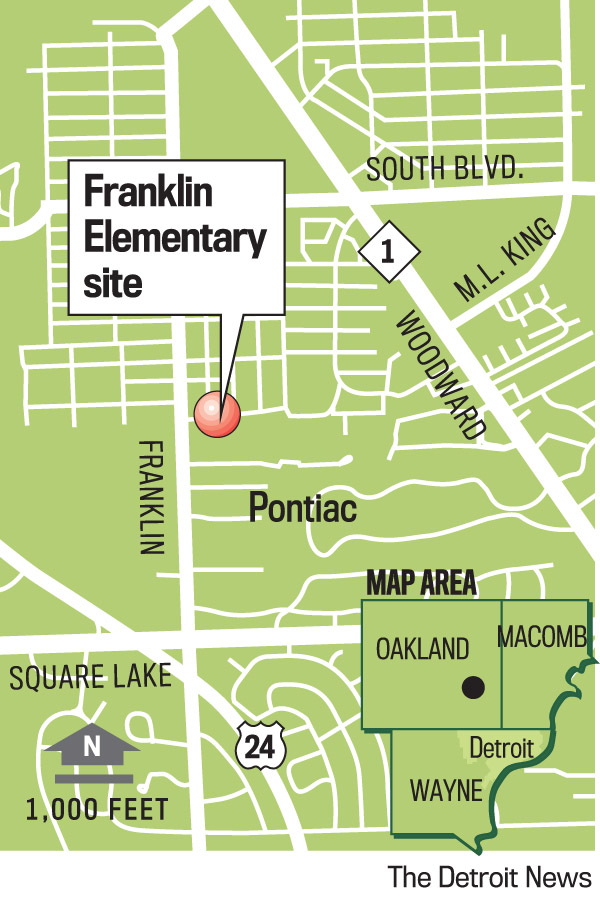 But this unassuming post-World War II neighborhood of small ranch and split-level homes became the white hot center of fear and suspicion in Metro Detroit following the terrorist attacks in Paris. After Gov. Rick Snyder announced Nov. 15 he planned to prevent the influx of refugees from Syria, Oakland County Executive L. Brooks Patterson warned of “an immediate threat of imminent danger” looming in Oakland, with the development of what he called “Syrian Refugee Village.”

Republican Patterson’s stance put him at odds with fellow Oakland County official Andrew Meisner, the Democratic treasurer, who had met several times with the group, and views their investment as a way to stabilize the neighborhood, as part of a wave of investment in Pontiac. It caught the attention of a neighborhood whose mostly African-American residents express concern, and even hostility, about the prospect of Syrian refugees moving in.

“I don’t usually agree with (Patterson),” said Sonya May, a 44-year-old grandmother who has lived in the neighborhood for 13 years. “But I liked that he was against this.” She expresses concern about terrorists and having neighbors who don’t speak English. “We’re not going to be able to understand them,” she says.

They would object even if the Syrian investors offered a medical clinic or social services or recreation across the street? “I wouldn’t go there,” said Anthony Shelton, who was chatting with May in her driveway.

May’s neighbor, Richard Standler, 61, a cancer patient and longtime resident, points at the school, saying: “I’m against it. We have plenty of homeless, poor people here. Why not help them?”

But a couple of blocks away, at the Macedonia Missionary Baptist Church, Sheron Daugherty was helping to feed the homeless on Monday afternoon. “These people need a place to live, too,” she says of the Syrian refugees, before laughing. And down the street, blowing leaves before the first snowfall, postal carrier Willie Elam Jr. said he would welcome new homes and a community center for Syrian refugees and others. “I feel if I were in their shoes, I would want some help.”

In a small way, what’s happening in this hunkered-down Pontiac neighborhood mirrors our nation’s internal struggle with immigration and history of ambivalence toward newcomers. While national policy and public values honor the idea of the U.S. as a place of refuge, hostility and fear are well-rooted. Oliver Wendell Holmes, in 1858, described Americans as “the great assimilating people.” Poet-philosopher Ralph Waldo Emerson celebrated the idea of immigrants from around the globe converging to create “a new people.”

Howard Brick, the Louis B. Evans professor of American history at the University of Michigan, cites both sources to describe America’s current state of unease. “Any number of people generally of good will might react with uncertainty or even fear to the prospect of resettling refugees from the bloody fields of Syria,” he said, but it’s an open question whether that will sour into hatred “or be overcome by the more generous and humane side of American traditions.”

That latter, generous impulse is already on view in Pontiac. On Friday, a signed note was left at the school door: “I am glad for the plans being made for a community center. If you are looking for volunteers, even if it is to rake leaves, or paint/clean inside, please contact me.”

Another potential volunteer, Daniel Elkin, a Pontiac resident who graduated from Cranbrook’s masters in architecture program last year, drove by to see if he could contact the investors. He is teaching a course in interior design at Lawrence Technological University and thought his students might create a project around the building’s needs.

“With all the negative voices, we need to represent the better parts of our (national) character,” he said.

Alatassi, an internist who came to Detroit 25 years ago as a medical resident, has seen the Syrian war’s impact on his family. A sister fled to Jordan. His brother-in-law, a 25-year-old banker in Homs, Syria, who volunteered for the Red Cross in his spare time, was gunned down two years ago “for no reason but because he was helping people.” By turning away these Syrians, he says, Americans are punishing the Islamic State group’s victims, not terrorists.

An avid reader of American history, Alatassi knows that Americans struggle with fear, paranoia, and the guideposts for determining legitimate security risks. He and his partners hope to raise another $4 million (“all private money,” he says) for the project. He still has faith in his adopted country. When the political moment passes, his group’s effort to rebuild one Pontiac neighborhood for refugees and others with a need for low-cost housing will go on. “This country in the end always does the right thing,” he said.