Right-hander believes he's recovered from a pinched nerve in his neck, which led to his downfall last season.

Thousands of Tigers fans line up at Gate A for TigerFest at Comerica Park, Saturday, January 21, 2017. Todd McInturf, The Detroit News
Fullscreen

Thousands of Tigers fans line up at Gate A for TigerFest. Todd McInturf, The Detroit News
Fullscreen

These are maple Chandler Bats on sale for $125. Todd McInturf, The Detroit News
Fullscreen 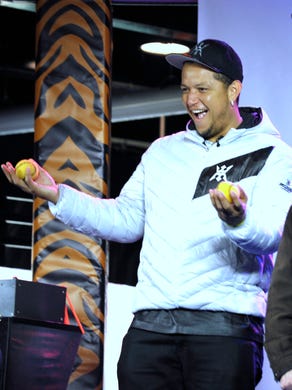 Tiger Miguel Cabrera, left, laughs with the crowd as A2 Magic owner magician Jeff Wawrzaszek, center, 61, of Ann Arbor, laughs with Ethan McManemy, 10, of Richmond, during his magic show on the Kids Stage. Todd McInturf, The Detroit News
Fullscreen

Myah Pitcher, left, 10, looks at her mother, Tina Pitcher, right, 38, both of St. Louis, Mvhigan, as they and Charleah Whipple, center, 10, of Metamora, watch Miguel Cabrera on the Kids Stage. Todd McInturf, The Detroit News
Fullscreen

The Myer family, including, Kim, 39, her husband, Shaun, 31, and their son, Greyson, 2, all of Canton, look at the field. Todd McInturf, The Detroit News
Fullscreen

Tiger Tyler Collins smiles for a portrait while he signs autographs in The Pro Shop. Todd McInturf, The Detroit News
Fullscreen

Detroit — Notes, thoughts, items as the Tigers assemble a few weeks ahead of another sun-and-fun stint at Lakeland, Fla.

So much rests on Jordan Zimmermann as the Tigers ponder their 2017 rotation.

The worst part about last year, said Zimmermann, a right-handed starter who was supposed to be no lower than No. 2 in a five-man Tigers sequence headed by Justin Verlander, is doctors couldn’t say why he was in pain and so out of kilter as the 2016 season unfurled.

“I’m just happy they figured out what it was,” Zimmermann said this week as the Tigers headed for buses and publicity cruises in Metro Detroit and statewide.

It turned out to be a pinched nerve that stretched from Zimmermann’s neck into his right shoulder. There also was disk degeneration.

This would explain why a star pitcher’s year began rather spectacularly (5-0 record, 1.06 WHIP through April) and why everything blew up beginning in May.

“It was terrible,” said Zimmermann, who a month into the season began noticing issues. “I thought it would go away. And it got worse and worse.”

So, at the end of the year, after specialists in Dallas were able to help, he got a couple of shots and a stretching regimen and today appears to be on track. Zimmermann last week threw 20 pitches from a mound. He’ll be heading to Lakeland at the end of this month.

The question: His fastball was barely scraping 90 as Zimmermann’s pitching life deteriorated last season. He threw 94-95 in his blue-ribbon days with the Nationals. Can he reclaim some essential heat?

“I’ve got a lot of bullets under the belt,” said Zimmermann, who knows what the Tigers invested ($110 million, $88 million remaining over the next four years).

Watch him closely during spring camp. No pitcher this side of Verlander, perhaps no player, will be as important to a Tigers surge in 2017 as Zimmermann. Without him pitching regularly and pitching well, the Tigers aren’t easily matching those 86 games they won in 2016.

What to do about players whose option tank is empty.

Unless people get hurt during camp the above trio can’t practically make Detroit’s Opening Day roster.

The three are out of minor-league options. No return to the bushes unless they’re first placed on waivers. And it’s an easy bet none of the above would last deep into the waiver wire.

Collins is safe. Almost assuredly. He can play all outfield positions. He has a left-handed bat and can put a ball into the seats. He’s also carrying a different body in 2017.

“I saw what a tool speed can be,” said Collins, who is at 205 pounds and looks even leaner.

The Tigers will keep him unless he ends up in some kind of trade package.

Moya is on the reverse end.

He has no real place with the Tigers. He can’t defend with enough competence for the Tigers to trust him in right or left field. And his left-handed bat, for all its cloud-busting potential, isn’t reliable enough to make him a part-timer or DH when Victor Martinez is still employed by Detroit through 2018.

It is all but a certainty Moya is in his final 80 days with Detroit.

Machado is the most intriguing of the nowhere-to-go gang. The Tigers would love to play him regularly — at shortstop or second base.

They insist he would defend close to the brand associated with Jose Iglesias. They project his offense wouldn’t be significantly beneath, and would even be a tad better in terms of extra-base pop, than Iglesias delivers.

But this is a freakish time on the baseball market. Few teams need shortstops. Interest in Iglesias has been next-to-nil.

New Tiger CF Mahtook: ‘Offensively, I can be an asset’

Ian Kinser, of course, is always a nice conversation topic. He probably would be Dodgers-bound if the Dodgers hadn’t suddenly been all but foreclosed by the new owners-players agreement as well as by Commissioner Rob Manfred clamping onto their behinds for having busted way past the luxury-tax chalk lines.

So, Machado, who can’t efficiently be carried as a backup when Andrew Romine is so handy and when Machado must, for his and a team’s own good, work as a starter, sits waiting for a trade the Tigers are almost sure to make before the end of spring camp.

Word from Lakeland: You’re going to love the new look.

Those who have gotten early peeks at a $40 million renovation of the Tigertown complex and Publix Field at Marchant Stadium (we’ll go with the full title since names are official and so are sponsor dollars) say, over and over again, the new digs are “spectacular.”

That’s the way it looked even when renderings were forwarded a few years ago.

Roofed seats extend from the immediate infield area to the berm in left field, and similarly down the right-field line through the right-field sector. It’s a wraparound, walk-around configuration. And it dazzles.

There are new stadium concourses. There’s a new clubhouse (mercifully) and new weight rooms. And a new, three-floor construction beyond right field that includes offices for the year-round Tigertown crew and Tigers big-league staff.

And it almost assuredly exceeded that original $40-million price tag. The parties weren’t going to scrimp on an 82-year-relationship that brings so much cash and cachet to a central Florida community. Not when, in tandem with benefits the Tigers consider invaluable, it’s sustained the longest marriage between town and team of any franchise in the big leagues.

Most years, you head for spring camp wanting a gander at a new team and revamped roster.

This year, the biggest changes have come to a spring-training complex and to a ballpark that define why Detroiters light up when they see, or hear, that ethereal word “Lakeland.”

It’s early. People feel as though they just finished Christmas.

A new baseball year came in a flash. This week’s Tigers Winter Caravan began the earliest it ever has hit the roads.

Check in a month — better yet, in two months — to gauge how season-ticket sales are going a year after the Tigers slipped to 2.5 million.

That’s a relative figure, by the way. During any year at old Tiger Stadium that famous, penny-squeezing Scotsman and front-office boss, Jim Campbell, would have danced a Scottish gig in a kilt to get 2.5 million.

A dozen years ago the Tigers would have killed to get even 2 million. They drew only a few more in their modern-day breakthrough season, 2006, when they sold 2.59 million seats.

Season attendance is secured and positioned for blastoff when season tickets are healthy, which is generally anything above 20,000. The Tigers aren’t close to determining what they’ll have for 2017 but they’re probably, at best, on the cusp of 20,000 — high teens, anyway.

What they’ve learned is interesting. For all the low energy and indifference to an offseason that hasn’t much changed Detroit’s roster, the phone-answerers have gotten just as much renewed interest from ticket-buyers who weren’t interested in seeing Verlander or Kinsler or other Hollywood names head elsewhere.

So, it’s up to how a team plays. And what deals might yet surface that could put a slightly different face on Brad Ausmus’ lineup. A manager, as much as Comerica Park’s ticket-hawkers, wait for what might be ahead.