If you care to see the sheer bliss of baseball performance and serenity embodied in one man, study Upton. 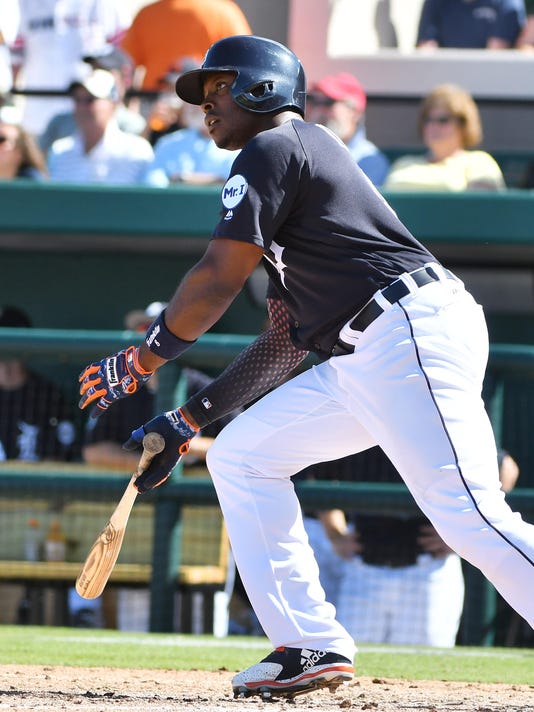 Justin Upton is batting .292 on the Grapefruit League season with an All-Star-grade .945 OPS. His on-base percentage is .320, a bit light by Upton’s standards.(Photo: Robin Buckson / Detroit News)

Lakeland, Fla. — On behalf of those who agree on some simple truths during the past month, this has not been a memorable Tigers spring camp, this 2017 gathering beneath the sun and blue skies of central Florida.

The team’s main issue was obvious even before Tigertown opened for official business. The 2017 roster is a re-inflated version of last year’s low-altitude balloon that missed October’s playoffs. People seem to have concluded, to varying extents, they’ve seen this Tigers flick before.

Making matters more complicated, and even less entertaining, many of the Tigers stars (Ian Kinsler, Miguel Cabrera, Victor Martinez, etc.) have been on paid leave working for their World Baseball Classic teams.

But, ah, apart from the fact spring training is, even in a relatively down year, among the merrier times on a baseball person’s calendar, there have been pluses at Lakeland.

Two, in this view.

The $48 million in Tigertown/Marchant Stadium/Publix Field renovations have been worth seeing even if the baseball team’s voltage has been down a tick.

There also has been a player worth watching. Every day. During every at-bat.

If you care to see the sheer bliss of baseball performance and serenity embodied in one man, study Upton, the Tigers left fielder, in March of 2017.

He is batting .292 on the Grapefruit League season with an All-Star-grade .945 OPS. His on-base percentage is .320, a bit light by Upton’s standards.

But his slugging percentage is a massive .625 thanks to four home runs and four doubles, one of which he slashed among his two hits in Monday’s game, a 5-0 whipping of the Mets at Publix Field.

You see the difference from a year ago when a bad spring camp previewed a horrible first four months from Upton’s first season with the Tigers.

Upton is, by acclamation, among the best-mannered and most pleasing of the Tigers regulars. What made his traits in civility particularly impressive a year ago was that he remained a gentleman even during those horrid first four months when at-bats were exercises in inevitable strikeouts.

He handled a gruesome baseball crucible with steady grace. Now, in 2017, we see a new man in that performance is matching personality.

“From the first day of spring training, I’ve just been letting things work. It’s just a matter of being able to trust it (his baseball gifts).”

Why it went so badly a year ago, Upton still can’t explain. He acknowledges part of it, for sure, was a culprit baseball people have always said is underappreciated: the change from one league to another.

“But some of that was on me, too,” Upton said, explaining his mechanics weren’t quite right, which created issues — they became increasingly psychological — that coaches couldn’t easily remedy.

Tigers manager Brad Ausmus gave him a three-day vacation in July. And then it all clicked: home runs by the bushel, almost all of them thunderous drives of 400-plus feet, which became part of his routine for the remainder of 2016.

“It’s fun when you’re not thinking,” he said after Monday’s mashing of the Mets.

You can see that Upton is on the cusp of what could be an exceptional season. You could see it in two at-bats two weeks ago at Clearwater against the Phillies.

Upton had crushed a pitch early in the game for one of his trademark monster-shot homers. The next time up, he just missed a hanger and beat his bat into the ground, angry with himself, as he skipped to first base on what turned into a fly ball.

It leads a Tigers follower to ask a necessary question. Upton signed a huge free-agent deal 14 months ago: six years, $144 million, with an opt-out, if he so chooses, after the 2016 season.

Baseball’s market has done a pirouette since Upton signed. Contracts have become shorter, for the most part, and less generous. Even if he were to have a colossal 2017 — maintaining for six months what he did in last year’s finals six weeks — it seems laughable that Upton would stand to draw more than the $96 million he otherwise is guaranteed from the Tigers through 2021.

This is a straight business decision or any player and his agent. Upton doesn’t shy away from simple facts. He understands the contract language. It’s what he and his agent thought would be in a young player’s interests.

But understand also that Upton isn’t measuring personal peace these days by dollars or by his contract’s clauses.

“We’re both in good spots,” he said, speaking of himself and of the Tigers, and how a man who is living the joy of playing some very good big-league baseball early in 2017, can be confident about the months, and years — and at-bats — ahead.