Gardening: How to tell when your tomatoes are ripe, flavorful

Cool temperatures can ruin the flavor of tomatoes, so if they have not ripened by the time the thermometer drops to 50 degrees or lower at night, the party is over for this year.

Gardening: How to tell when your tomatoes are ripe, flavorful 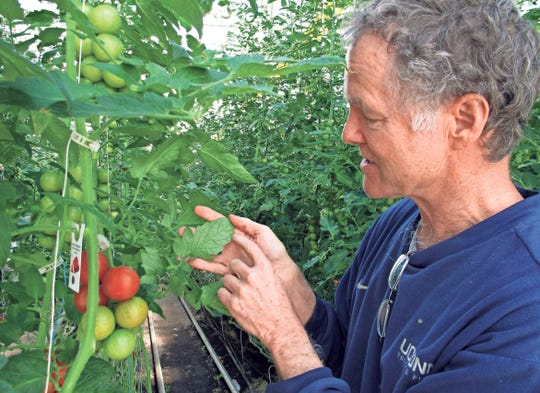 I got a late start planting my tomatoes this spring, and while my plants are loaded with fruit, it looks as if they may not have time to ripen before the cold weather arrives. Cool temperatures can ruin the flavor of tomatoes, so if they have not ripened by the time the thermometer drops to 50 degrees or lower at night, the party is over for this year. I harvest those that have begun to color up and let them ripen indoors where it’s warm.

If late season green tomatoes are close to maturity, they may also ripen after picking, and while they won’t be quite as flavorful as their vine-ripened relatives, they’ll still be edible and certainly can be used for cooking.  There’s always fried green tomatoes.

But how do you know when they have reached this point?  In his most recent newsletter, Stephen Scott from Terrior Seeds (www.seeds@underwoodgarden.com gave the good explanation on  how tomatoes ripen and how to recognize when they’re ripe enough to pick.

Scott says harvesting when there is just a touch of pink at the stem end or when the fruit is completely red gives the best flavor. In the case of orange or yellow tomatoes you’ll see a blush of color.

He says tomatoes begin the ripening process by producing ethylene gas, a natural growth regulator, and releasing it. The fruit ripens from the inside out, meaning the center matures and turns red before the color reaches the outer skin. Faint white lines crossing each other at the bottom or blossom end of the fruit show the ripening has begun.

On my tomatoes they look a bit like stars.  Soon afterward, the blossom end starts turning pink – indicating ethylene is being produced. When the pink blush reaches the stem, the fruit is about 75% ripe. The pink color deepens to red, starting from the blossom end and working its way upward.

Once the tomato is ripe, test by giving it a gentle pull or twist. If it slips easily from the vine – with little to no effort – it’s ripe.

Cool temperatures ruin the flavor and texture of tomatoes, which is why they should not be stored in the refrigerator.

If you need to harvest your tomatoes early because of the weather or disease is attacking the plant,  those fruits with a pink blush at the blossom end will ripen indoors with almost full flavor says Scott. Those with the faint white lines can still ripen but won’t have the full flavor of the vine ripened tomatoes.  Time to make some chili.

Nancy Szerlag is a master gardener and Metro Detroit freelance writer. Her column appears Fridays in Homestyle. To ask her a question go to Yardener.com and click on Ask Nancy. You can also read her previous columns at detroitnews.com/homestyle