A hawk in the house

Unexpected visitor in Royal Oak leaves an impression, along with lots of wreckage and poop

A hawk in the house 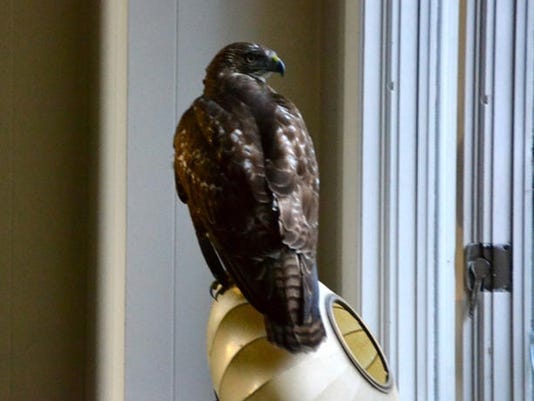 First, she blamed the cat. Then she thought it was a burglar.

Then Ann Duke heard her daughter say, "Omigod!" — which is a natural reaction when you come face-to-beak with a red-tailed hawk.

Duke, husband Ken Zawislak and 18-year-old Deanna live in a particularly leafy sector of Royal Oak. They've seen wildlife in the neighborhood before.

A few weeks ago, though, was the first time they'd seen it in their house.

Letting themselves in after four days away, Duke says, they noticed the glass orb from an art deco bronze sculpture shattered on the floor. Then, in the dining room, she saw crystal candlesticks scattered like bowling pins.

That was about the time Deanna peered from the kitchen into the family room and announced, "Mom, I'm looking at the biggest bird I've ever seen."

The hawk seemed as surprised to see them as they were to see it. It spread its wings to their full 50 inches or so and glowered, or whatever it is hawks do that approximates glowering.

The bird was perched, Duke noticed, on a lamp — a valuable George Nelson mid-century from the 1950s.

That was one of many reasons the hawk was not welcome. The family dachshund, Martini, and the orange and white cat, Skittles, were two others.

But birds of prey do not understand subtle hints, let alone court orders ... so how do you evict one?

A hawk in the house could happen to anyone, theoretically, or at least anyone with a window.

If it's your house, it's a good idea not to be a former antiques dealer like Duke married to an architectural designer like Zawislak; nobody's furnishings cope well with talon gashes or hawk poop, but theirs are particularly difficult to replace.

"They couldn't get me off the phone fast enough," says Duke, 55, the marketing director for Tapper's Diamonds & Fine Jewelry.

Her next call was to animal control, which said sorry, it only deals with creatures who walk. A guy at a pest removal company told her to call animal control, or 911, or anyone else but him.

Meantime, darkness was looming, and the family was freezing.

Red-tailed hawks can fly at about 40 mph and dive at three times that speed. This one had blazed through a double-paned family room window, and judging by the toppled furnishings and copious droppings, arctic air had probably been wafting in for several days.

Duke thought the bird might have targeted the cat, or failed to put the brakes on as it chased a mourning dove.

Actually, says the Detroit Zoological Society's curator of birds, a 19-pound cat is far too big a target for a hawk that weighs about a tenth of that, and red-tails prefer rodents to anything that flies.

"I'd be willing to guess," says Tom Schneider, that the hawk saw the reflection of the outdoors in the glass and "just thought it was a field."

The American Bird Conservancy estimates that more than 300 million birds die in the United States every year from unfortunate confrontations with glass.

Duke only knew that it was imposing, in every sense of the word.

"I didn't want to do anything to hurt him," she says, or worse yet make him mad, but he had to go.

The three humans, making good use of their large brains and opposable thumbs, opened all the doors and windows and girded themselves in jackets, leather hats, goggles and gloves.

(Actually, says Schneider, it's better to darken the house and open the door; the bird will fly toward the light. But there was no instruction manual with the hawk.)

Zawislak began waving a large bath towel, and the hawk took flight — into the dining room, where it perched on a window sill. Ten minutes later, with some more prompting from the towel, it disappeared into the night.

Insurance ultimately covered several thousand dollars in damage, after a $1,000 deductible. With the image of the bird still in her mind — and the check in hand — Duke has decided it was almost an honor to make its acquaintance.

"Such a beautiful creature," she says. "I've had a whole education in hawks."

She only hopes the hawk learned a few things, too.