Rubin: The Mackinac Bridge from down below. Way below

Rubin: The Mackinac Bridge from down below. Way below

Cartoonist Jef Mallett signs books at the HealthPlus Tour de Crim in Flint in May. He’ll swim the Straits of Mackinac on Labor Day.(Photo: Byron Tapo)

If you think the view is special from the Mackinac Bridge, try being in the water beneath it.

No, not in a boat. In the water. Swimming.

Or better yet, pausing. When he’s swimming, says Jef Mallett of Huntington Woods, he can only look to the side as he breathes.

When he’s bobbing, waiting for slower strokers to catch up, he can look skyward to the greatest navigational tool any swimmer could ever ask for.

He and 49 others made the swim in 2007, commemorating the 50th anniversary of the bridge. On Labor Day, he’ll be part of a larger pod of 84, crossing the Straits of Mackinac from St. Ignace to Mackinaw City.

The second Mighty Mac Swim, as it’s known, will raise a nice pool of money for Habitat for Humanity. It will also give Mallett another three hours in a body of water he once found intensely intimidating, but has become maybe his favorite in the world.

Mallett, 53, points out emphatically that he won’t be the fastest, fittest or most accomplished swimmer cutting through the waves as thousands of walkers stroll the bridge. The remarkable Jenny Birmelin of Farmington Hills, for instance, was the first Michigan woman to traverse the English Channel, and she’s among multiple open water specialists taking part.

“The Mackinac swim for these people,” he says, “would be a warm-up.”

But Mallett is the only participant who writes and draws a nationally beloved comic strip — which gives him both a certain status, and a sizable lead in the low-key race to collect the most donations.

Want an autographed original strip from “Frazz”? How about a swim cap, triathlon racing bib or T-shirt, signed and be-scribbled with an image of his title character?

Mallett will do the hard work, churning 5 miles counting the inevitable drift or 4 1/2 miles, the way he puts it, “as the seagull flies.”

Mallett has been a daily cartoonist since high school in Big Rapids, where the local paper paid him $5 a week for a strip called “Birchbark” about a French-Canadian trapper.

“Frazz” debuted in 2001 and now appears in The Detroit News, more than 250 other newspapers and at gocomics.com/frazz, the place to go to make contributions in exchange for Mallett’s signed swag.

The strip revolves around Edwin “Frazz” Frazier, an elementary school custodian who likes his job enough to keep it even though he’s become wealthy writing hit songs. 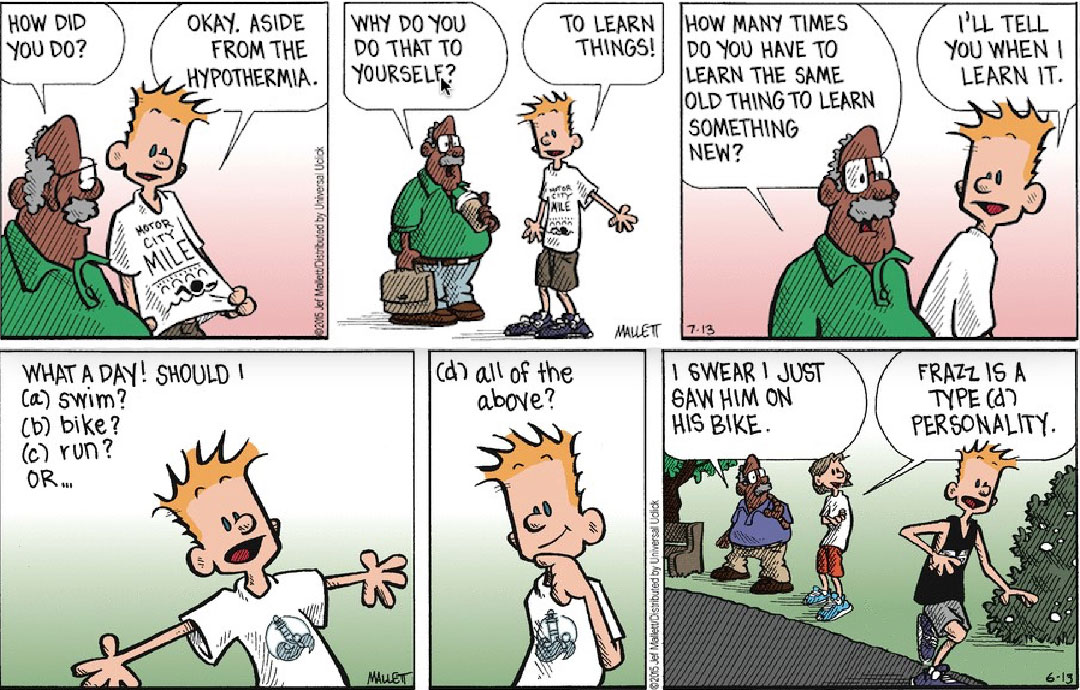 Frazz is a triathlete, as is Mallett, though the cartoonist’s heart has been somewhat hijacked by open-water swimming.

He eased off on triathlon in search of balance in his life, and also because it’s increasingly dangerous for a bicyclist to take training rides on pitted roads occupied by texting drivers. Thanks largely to that first Mackinac swim, however, “I’m as unbalanced as ever.”

Twice since then, he has made the swim from Alcatraz to San Francisco.

A few weeks ago in Boston Harbor, hypothermia stopped him halfway through an 8-mile route. Under channel swimming rules, you can’t wear a wetsuit, so it’s actually a disadvantage to have the body fat of a hummingbird.

The open-water veterans tell him, “You’re just going to have to train more with Ben & Jerry.” Patty has a better idea: try warm water events, like the one in Waikiki.

For the Mighty Mac, he’ll wear a wetsuit and what passes for a smile amid Great Lakes chop.

The event was conceived by a distance swimmer with a contradictory name, Jim Dreyer. Participants have to raise at least $2,800 for Habitat for Humanity.

Thanks to his “Frazz” incentives and shipping help from his distributor, Universal Uclick, Mallett is the leader with nearly $14,000. But he doesn’t see the fundraising as any more competitive than the swim, which isn’t timed.

When someone climbs Mt. Everest, he says, “does anybody ask how fast they went?”

Of course not. You do these things for the challenge of scaling heights — even when the heights are 155 feet below a bridge.