Puzzled by the notion of tainted water, second-grader from outside D.C. launches a fundraiser that’s already paying off 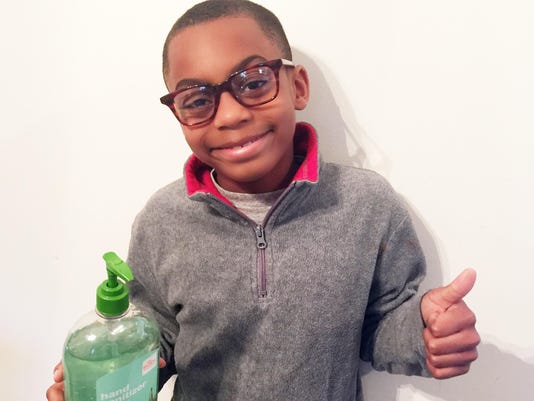 Isiah Britt, 7, of Gainesville, Virginia, started a drive to supply hand sanitizer for elementary schools in Flint. It had topped $1,500 as of early Friday — enough to supply three schools for a year.(Photo: Britt family)

There are certain concepts you take for granted when you are 7 years old.

Water is refreshing, for instance. Grown-ups are wise and do the right things. You understand those truths to be self-evident, the same way you know that Mom loves you.

Then Isiah Britt of Gainesville, Virginia, found out about Flint, and the elementary schools whose drinking fountains are quarantined in plastic shrouds.

“He was like, ‘Why is this happening? It doesn’t make sense,’ ” says his mother’s fiancee, Kensley Dougan.

Thanks to a karate-kicking, soccer-playing, dancing-spontaneously-when-he’s-happy young man 575 miles away, Eisenhower Elementary in Flint now has a year’s supply of hand sanitizer. More sanitizer should arrive at more schools this week.

“It feels weird,” Isiah says, to think that kids his age can’t go to the drinking fountain when they are thirsty or wash their hands when the need arises.

“It feels good,” he says, to know he’s making their lives a bit better.

There you have the inspiration for giving and the spirit of it, in two very short sentences from a relatively tall second-grader.

No water to wash

The good feeling started with an assignment to write a report at Buckland Mills Elementary in suburban Washington, D.C.

“I want to make one on clean water,” Isiah announced to his mother, Danielle Britt, who works in information technology.

She suggested writing about Flint, and Dougan showed him a few relevant videos on YouTube.

That was the a-ha moment, not quite two weeks ago. If Flint schools need water, Isiah declared, he would help supply it.

But they don’t, at least for now. Britt and Isiah made a few phone calls and discovered that the schools are awash in bottled water, donated by every generous Tom, Dick and Cher with a credit card.

If you can’t trust the water to drink, though, you shouldn’t wash your hands in it. Students have been warned to avoid the bathroom sinks.

“I can’t even imagine it,” says Dougan, 32, a financial planner who went to Hampton University with Britt. Three-hundred-seventy kids, 740 hands, heaven and the health department only know how many germs.

That was the petri dish for Isiah’s Hand Sanitizer Fundraiser at gofundme.com.

“We did the math,” Dougan says. Dispensers and refills for offices, hallways and bathrooms would cost about $500.

The online pitch from Isiah went up two Fridays ago. The first $500 took less than a day to roll in.

“I was super-surprised,” Isiah says. Thrilled, too. His mom recorded his dance of glee, and Dougan posted it on Facebook.

A work order has been put in to mount the shipment of sanitizer in appropriate places at Eisenhower, which sits about a quarter-mile south of the Flint River.

Each classroom already had a jug, but as the city has learned the hard way, you can’t over-stress cleanliness and safety.

Isiah, meanwhile, is busily emailing thank-yous as the donations arrive. At least one, he could hand-deliver: his teacher, Marylouise Polhamus, gave $30.

“Go Isiah!” she wrote online. “You’re an amazing young man! So very proud of you and your efforts to support so many students in Flint, Michigan.”

Dougan, whom Isiah refers to as “my dad,” says Isiah has “a kind, giving heart.”

A tae kwan do student and a soccer standout, he’s “very giving,” Dougan says. “He’s protective of other people who are younger than him or smaller than him.”

Dougan says he’s an example for everyone, adults even more than children.

Isiah says he’s just carrying out what he’s been taught, which is a good example in its own right.

Kids don’t just pay attention to the occasional oops-word you wish you hadn’t said in front of them. If you demonstrate thoughtfulness and generosity, they will repeat it on their own, if not as immediately as they pick up that word.

Ultimately, Isiah proclaims, he hopes to be a professional soccer player, which will take years of training and practice.

Also, he says, “I want to help others” — which turns out to be so easy that even a 7-year-old can do it.