Jewish News columnist turns 100: When he writes, 'everyone listens'

Jewish News columnist turns 100: When he writes, 'everyone listens' 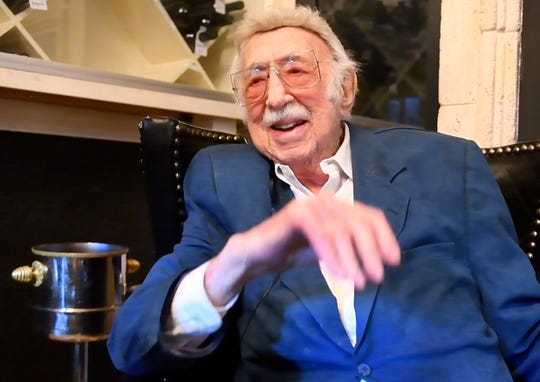 Danny Raskin did not set out to be a century old, or a restaurant columnist, or a legend. And none of that seems to impress him much.

What impresses him is endurance. But again: not his.

Raskin turned 100 in January. On Thursday, the weekly Detroit Jewish News turned 77. He wrote a column for the first edition back on March 27, 1942, and he's had a column in every edition since, except for the few decades when he had two.

If you're keeping score at home, that's 4,005 consecutive issues. He is the Lou Gehrig of newspaper columnists, the guy you can't get out of the lineup — and incredibly, almost absurdly, he actually saw Gehrig play.

Probably the best team ever, he says. A lineup of immortals on the perfect grass of Navin Field, before it was Tiger Stadium or even Briggs Stadium. Some things have staying power, and that's what he appreciates.

"I always will write about a restaurant that's been in business," Raskin says. "The one who's made it three or five years, I want to write about that guy."

Let the foodies chase the next big thing. If it's still around to have an anniversary, he'll catch up.

"Best of Everything," his column is called. A profile of a restaurant. Maybe a few notes about other places. A joke. Some birthday salutes.

It's a throwback, or maybe a better word is classic. It's what you might expect from someone who was born when the smoke was still clearing from World War I, if you expect anything from that gentleman at all.

People read it. They respond. As he sat quietly at dinner at Steven Lelli's Inn on the Green in Farmington Hills a few days ago, strangers passed his booth and offered greetings:

"Happy Birthday. How do you do it?"

Arthur Horwitz became editor of the Jewish News in 1986, 14 years before he bought it. With an eye toward making changes, he commissioned a readership study, and he's done more of them since.

"Whatever assumptions I might have had," he says, "Danny and his work transcend the generations. He's consistently one of the best-read parts of the paper."

The other is the obituaries. Raskin reads them just like everyone else, but he has no plans to be in one anytime soon. 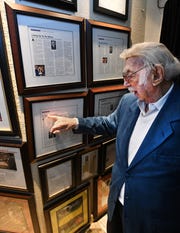 Jewish News restaurant columnist Danny Raskin, 100, looks at one of his columns which hangs on the walls of Steven Lelli's Inn on the Green restaurant in Farmington Hills. (Photo: Daniel Mears, The Detroit News)

That Yankees game, back in 1927? The year Charles Lindbergh flew solo across the Atlantic?

Ask who took him and you'll get an honest answer: "I don't remember."

Raskin is in startlingly good shape for someone who was born the year the United States adopted Prohibition. His legs are swollen, but he'll insist on you preceding him through a doorway or up the stairs, even if your instinct is to stand behind him in case he topples backward.

He wears oversized glasses, hearing aids, a white mustache and a white toupee that's become something of a trademark. Judging a cooking contest at a conservative synagogue in Farmington Hills, he was once admonished to wear a head covering.

He lives on his own in a two-story West Bloomfield Township condo. The basement flooded last year, a heck of a mess, but until then he'd go downstairs to his office every day.

There's a life-size suit of armor down there, its lightweight metal hands holding three small American flags, and it only makes sense to ask where it came from.

Again, and without embarrassment, he admits, "I don't remember."

Some things have simply slipped his mind. Lots of others haven't. He'll tell stories from the old days and they always have a direction and a point. Cooks, crooks, kooks ... Mostly, at least tangentially, the tales involve food.

Raskin is 15 years old, for instance, and he's at a restaurant with the Purple Gang. Not the entire cast of Jewish hoodlums, but some of the junior members, probably in their early 20s.

The restaurant is the long-gone Cream of Michigan on 12th Street near Pingree, where Raskin grew up, and they've just ordered banana cream pie when a boy comes busting through the door.

Two jerks in a truck tried to grab his sister, the kid says, and after she ran away, the jerks grabbed him and slapped him and called him a dirty Jew.

"Hold the cream pie," a mobster tells the waiter, and then he turns and says, "Raskin, come with us."

They wind up in Hamtramck, where one of the "Purple Boys," as Raskin calls them, drags the truck driver out of a saloon. The gangster shoves a gun into the driver's open mouth. He pulls the trigger. And ...

"Next time you come around 12th Street," the gunman says, "there's gonna be a bullet in it."

Then they all go back to the restaurant and eat dessert. The moral of the story?

When Raskin was born in Detroit in 1919, the life expectancy for an American male was 53.5 years. He is literally older than sliced bread; the machine wasn't invented until 1928.

His dad, a firefighter who went into the cartage business, died when Raskin was 8 months old. His mom lived to 95.

He has a son, Scott, who's thriving as a dot-com executive in California, and frequently sees a stepdaughter in Ferndale, Pam Smith.

But he has outlasted three siblings, three marriages, any number of favorite restaurants, dozens of friends and most of his editors.

"He talks about her constantly," Smith says.

Frieda was a former model who had owned hair salons and wig shops and was still the belle of the ball at a bar called Jakk's in Southfield.

"My mother walked in a room, and it was like the Red Sea parted," Smith says. "Well. it was the same thing with Danny. Everybody recognized him from the column. Everybody wanted to know him." 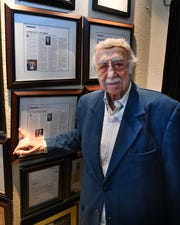 Jewish News restaurant columnist Danny Raskin, 100, stands beside some of his work, which hangs on the walls of Steven Lelli's Inn on the Green restaurant in Farmington Hills. (Photo: Daniel Mears, The Detroit News)

He introduced himself, and they were together for 35 years until kidney disease took her in 2010.

Most of that time, Raskin sold ads for the Jewish News. The columns were separate, always done ahead of deadline and on his own terms.

The first was called Jewish Youth's Listening Post and focused initially on Jews fighting in World War II. In 1964, he went to a deli in downtown Detroit for lunch and wrote about it, and by the next week, his job description also included Best of Everything.

His most recent subject was Uptown Parthenon, marking 20 years in West Bloomfield, one of those anniversaries he loves. There were a few paragraphs of introduction and history, an account of the Parthenon's emigration from Greektown, and then a standard Raskin assessment of the menu.

"There are no cans to be found … and its own soups are a joy … Plus, the exclusive preparation of Neframia (roast loin of lamb) …" he wrote. "It is all Greek, but a couple of American sandwiches, too … the almighty hamburger and cheeseburger to go along with a Greek Burger … Even whitefish and salmon."

There's a rhythm to it, largely unchanged. In July 1979, he wrote about Tradition Night at an Oak Park deli called Esquire Two:

"Then came the entrees ... Frieda had baked short ribs ... and I ordered boiled beef flanken ... can't remember the last time I had this dish ... or when we had such tangy horse radish ... Included in the meal were farfel, kishke, boiled potato, boiled carrots, potato latkes and plenty of bread, naturally including halla."

Get him talking about restaurants, and it could be 1950.

"Restaurants are a tough racket," he says. Or, "There are great guys in the restaurant game."

Along with his vocabulary, what's unchanged is his appreciation for the people in the business.

He can be demanding, and occasionally impatient. If a server asks how "you guys" are doing, the owner will hear about it later.

But the owner will never read about it; if Raskin truly dislikes a spot, he simply won't put it in the newspaper. And he'll always give second chances.

"A guy might have his last dollar in the place," he says. "A customer will make a judgment on one visit. I'll go back and tell a restaurant what's wrong."

He comes at the job as a consumer, not a critic. Is the restaurant attractive? Are the portions and prices reasonable? When he peeked in the kitchen on his way to the men's room, did it look clean?

"These days, we're all so freaking Yelp-y," says Annabel Cohen, a caterer and food writer from Bloomfield Hills. "We're all experts on what food is. Danny just enjoys food." 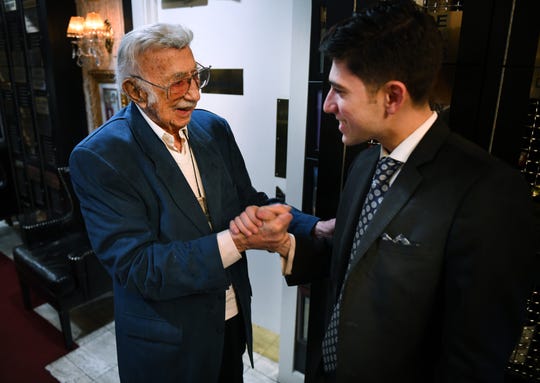 At Lelli's, where four of his columns are framed and mounted on a lobby wall, maitre d' Ari Zarkin greets him with a customized 10-step handshake. The chef swings by to discuss the fresh fish.

Raskin orders Chilean sea bass, hold the butter on top. Owner Mark Zarkin takes a seat next to him in what he calls booth No. 1.

"He's like E.F. Hutton. When Danny writes, everyone listens," Mark Zarkin says. "It's every restaurant owner's wish to be in Danny's column ... The next three weeks, they're calling like crazy."

Minestrone arrives, then a salad, then the fish. Mark has moved on, but Ari arrives as Raskin takes his first bite. "It's good," he says, and Ari beams.

Voices drift through the dark room from other tables: "Isn't that Danny Raskin?"

Raskin finishes all but a few bites. Mark recommends spumoni for dessert.

Raskin hesitates. He's already full, and it's rich, and he probably has two or three doctors who wouldn't like the idea. Then he shrugs.

"What the hell," he says. You only live once.