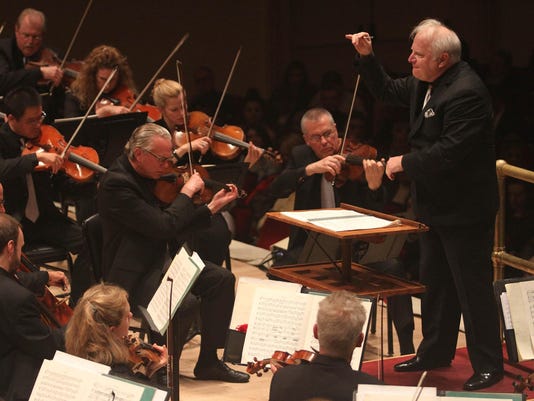 The DSO will announce Wednesday during the Detroit Regional Chamber’s Mackinac Policy Conference what it is calling a social progress initiative to better integrate the symphony with the rebuilding of Detroit.(Photo: Tina Fineberg / AP file)

The Detroit Symphony Orchestra is taking its music closer to the city’s streets.

The DSO will announce Wednesday during the Detroit Regional Chamber’s Mackinac Policy Conference what it is calling a social progress initiative to better integrate the symphony with the rebuilding of Detroit.

“This begins to give us a focus around the things we are doing and will be doing off the stage,” says Anne Parsons, chief executive of the DSO. “Our commitment to Detroit has been expanding. We see our role as an organization that promotes progress for the city and its people and help improve the quality of life for everyone, and to inspire others to do the same.

Specifically, the DSO will get out of the Max M. Fisher Music Center and into Detroit’s neighborhoods. The thinking is that for many city residents, The Max may as well be situated in a faraway suburb, given their limited ability to access it.

That’s a transportation issue, Parsons says, but an emotional barrier as well for those not comfortable in such an intimidating environment.

“Not everyone feels entirely equipped to get there,” she says.

The first project under the initiative will be partnering with a still-to-be-named east side public school to offer music lessons to children. The DSO has an extensive music education program at The Max, but it does not broadly reach kids from Detroit’s neighborhoods. The new Allegro Ensemble will offer free lessons, funded by a grant from the Dresner Foundation, right in the school.

The African-American Fellowship Program will expand to address the shortage of black orchestral professionals. Promising musicians will have the opportunity to play with and be mentored by DSO members.

Last fall, the symphony introduced the Detroit Community Orchestra, which allows adult amateur violinists, violists and bassists to rehearse and perform with the professionals.

There will be other outreach efforts as well, including performances before micro-audiences in the city.

“We have an opportunity and an obligation to drive social progress in our city,” says DSO Chairman Mark Davidoff, who is managing partner of Detroit-based Deloitte LLP.

The initiative grows out of the community commitment made to settle the 2010 musicians’ strike. In exchange for kicking in the money to fund a new contract, donors asked for a stronger presence by the orchestra outside of The Max. It spawned a series of community concerts in venues much smaller than The Max.

Both musicians and orchestra trustees were skeptical, fearing such concerts would cannibalize main stage performances.

“Just the opposite happened,” Davidoff says. “The community concerts are almost always sold out, and they have created a broader audience for the orchestra. Our subscription sales have climbed.

And that’s the side benefit of street-level outreach. Classical music can be a tough sell for younger audiences, regardless of income level.

Taking the music to where they live, showing a commitment to their neighborhoods, teaching them to play an instrument cultivates a bigger fan base, and a more diverse one.