Finley writes, "John McCain will be missed. As will the Republican Party he once symbolized, but is now fast fading." 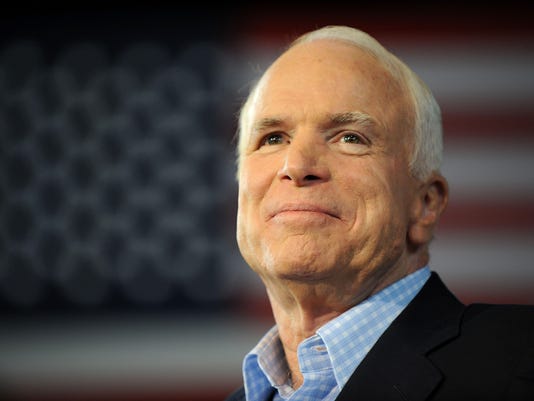 Sen. John McCain's passing is a metaphor for the demise of the party he served his entire political life.

The Republican Party of John McCain no longer exists. Say that McCain was an “establishment Republican,” if you like. The term has become a pejorative, used to disparage what those who’ve hijacked the GOP see as a self-serving insiders club rooted in the Washington swamp.

I prefer to call him a core values Republican, a man who was well-versed in the traditional ideals of the party and refused to allow them to be eroded or reshaped by partisan winds. Upholding those principles was more important than holding on to political power.

He stood for free trade and free markets. For robust immigration. For lower taxes and smaller government. And for a foreign policy that projected America’s might in the name of freedom and democracy, and not to bow other nations to its will.

McCain, who died Saturday at 81, by the end was well out of step with a GOP that has adopted an ends-justifies-the-means mentality and is willing to scrap protocols and established practice to gain an edge.

McCain knew better. There’s nothing conservative about the populism that has inflamed the Republican Party under its new leader, President Donald Trump.

McCain was a two-time presidential hopeful and war hero, an honorific he earned as a prisoner of war in Vietnam. But he was not always heroic. He could be hot-headed, petty and vindictive.

He became a villain for many Republicans when he refused to cast the vote that would have put over the top the repeal and replacement of Obamacare. The senator withheld support as much in protest of Trump’s bully-style of governing as he did in objection to the policy itself.

But overall, he conducted himself honorably. He was a parliamentarian who respected the traditions of Congress and understood the ultimate goal is to reach a consensus that serves the best interest of the country.

John McCain will be missed. As will the Republican Party he once symbolized, but is now fast fading.