Finley: "I'm going to be a straight-ticket no vote on ballot measures this fall." 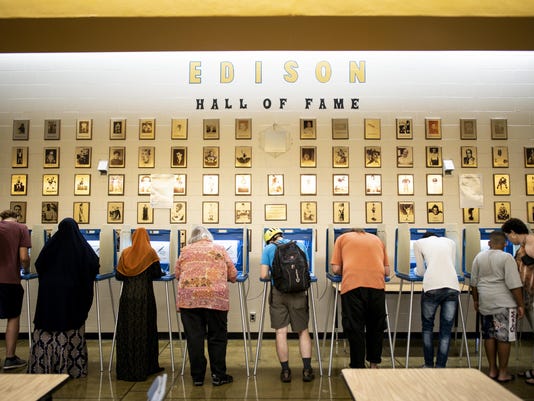 Finley: "I'm going to be a straight-ticket no vote on ballot measures this fall."(Photo: Aaron Lavinsky / AP)

Clarification: The Voters Not Politicians campaign did not pay for ballot signatures. An earlier version of this column did not make that clear.

Michigan voters will face three ballot proposals when they go to the polls on Nov. 6, and two others were pre-emptively adopted by the Legislature to keep them off the ballot. I'd like to add one more: A constitutional amendment to make it extremely difficult to pass amendments.

The process of amending the constitution and enacting laws through citizens initiatives gave way to a circus this year. A half dozen or more proposals vied for validation.

Two of them — one to change the way Michigan draws political lines and the other to raise the minimum wage — landed in the state Supreme Court, and most of the others faced challenges either in lower courts or before the state Board of Canvassers.

And not one of them is a true grassroots campaign driven by citizens who want to make Michigan a better place in which to live and work.

They were either backed by private interests hoping the measures will make them rich (recreational marijuana), or by political parties seeking to gain an edge (redistricting, the so-called voter rights initiative) or by unions and other groups trying to ramp up Democratic turnout (minimum wage, paid sick leave).

This crass abuse of referendums isn't what the drafters of Michigan's 1963 constitution intended when they provided an avenue for the people to alter the document.

The idea that what's going on has anything to do with the people is a farce. Petition drives are a mega-million enterprise. It can take $20 million or more to get a proposal on the ballot and fund the campaign to get it passed.

Citizens aren't out there circulating petitions. That work is done by disinterested circulators who are paid $2 to $3 for each name they collect.

Nor is it citizens who fund the campaigns. The money comes from corporations, business associations, unions and billionaires who use their bucks to gain an outsized influence on politics and policy.

Ballots are so bloated with proposals that voters have little hope of adequately parsing them to determine their impact. They aren't helped by the disingenuous names attached to the measures, such as Voters Not Politicians, the handle of the redistricting initiative, which falls well short of removing politicians from the redrawing of political lines.

The measure I'd support would ban paid petition circulators. No proposal should get before voters unless it truly originates from the people, meaning citizens would have to believe in the change enough to volunteer their time collecting signatures.

That would rid the ballot of most, if not all proposals. And that's OK.

It would force lawmakers to do the job they're elected to do. Legalizing marijuana, for example, could be passed by the Legislature. So could a minimum wage hike. Tough issues shouldn't be punted to voters.

The advantage of working through the legislative process is that a law can be undone if it turns out — as term limits did — to be a disaster. Constitutional amendments, once adopted, require another ballot drive to change.

I'm going to be a straight-ticket no vote on ballot measures this fall. If we reject enough of them, their big money backers will get the message that there's no return on their investment.