Finley: Even with tax, bad roads are here for a while

"Reversing decades of neglect will take both patience and sacrifice. Yet I don't sense Michigan residents are prepared for either one."

Finley: Even with tax, bad roads are here for a while 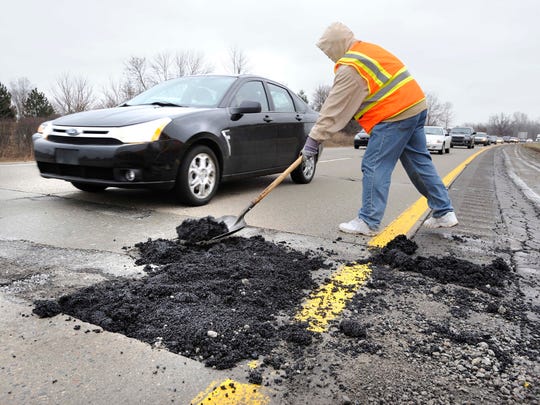 Even if Michigan adopts the 45-cent fuel tax increase sought by Gov. Gretchen Whitmer, it will be a long time before motorists will be driving on roads that are generally OK.

The additional $2 billion the tax hike will raise won't be enough to rapidly bring roads into repair. There are just too many surfaces in too poor a condition.

And the work is expensive. Wayne County Executive Warren Evans in his State of the County address tonight will detail three major projects he'll fund this year: Miller Bridge in Dearborn, Dix Bascule Bridge in Detroit and Haggerty Road through Livonia.

The price tag for just those three rebuilds is $100 million. In Macomb County, reconstructing nine miles of Mound Road will cost $185 million.

From subdivision streets to freeway service drives to heavily traveled highways, there are hundreds more roads and bridges in Metro Detroit desperate for attention. It will take years and a lot more billions to get to them all.

Reversing decades of neglect will take both patience and sacrifice. Yet I don't sense Michigan residents are prepared for either one.

Past decisions to defer infrastructure spending to either avoid tax hikes or support other programs have left Michigan with roads the pioneers on the Oregon Trail would have avoided.

A robust infusion of funds will boost the pace of the rebuilding, but the reality is these horrid roads will be with us for a awhile. Michigan motorists will pay the higher tax for a decade or more before seeing a full return on their investment.

The reality is also that getting the additional money is a long shot — and not just because of obstructionist lawmakers. The people don't want to pay more.

I spoke to a group of older women this week in an affluent suburb. All agreed the roads are deplorable. But when I asked how many would be willing to pay higher taxes to fix them, only about 40 percent of the hands went up.

There remains a belief that there's some other way to resolve the road crisis.

Since Whitmer made her proposal, what I've heard from readers is that the money for road work should come from elsewhere in the budget, or from "big corporations."

First off, corporate Michigan isn't going to pay an outsized share of the road bill. It doesn't have to. Businesses can go elsewhere and enjoy smooth highways without being shaken down.

And second, I'm not among those who think it's impossible to find $2 billion from the $10 billion General Fund budget for additional road spending. Michigan residents simply have to demand new spending priorities, and be prepared to live with the consequences.

Want to move money from classrooms to potholes? Tell your lawmakers and governor. Prefer better roads to safer streets? Demand prison spending be slashed. Tell them to take an ax to Medicaid and other health programs as well.

Those are the largest spending areas, consuming 70 percent of the General Fund budget. Cut each by 30 percent and it saves roughly what the proposed fuel tax hike would raise.

Make the choice. Or stop whining and keep driving on these wretched roads.